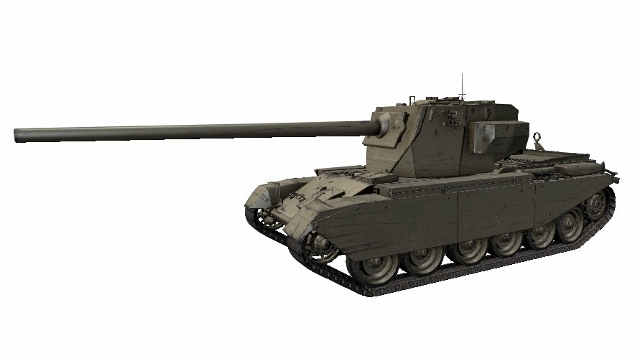 Conway is the penultimate of the new line of British tank destroyers. This vehicle has very huge turret, that looks more like a fridge than a turret of a tank. Luckily, this fridge has great firepower. You can mount a 120 mm AT Gun L1A1, to which the standard ammunition has nice 259mm penetration, and if you load it with premium bullet you can shoot even at vehicles like Maus or E-100. The damage isn't massive, but with rate of fire around 7 shots per minute it is quite something. Other advantages are the accuracy and time of focusing the aim, but that is typical for all British cannons. It's probably one of the best cannons available in the game. Other good thing is rotating turret than maybe does not rotate too fast, but it allows you to use camouflage net and telescope with ease. Other, less impressive advantages are nice amount of health points - 1500, which is pretty much for a tank destroyer. This vehicle is quite mobile. Top speed is only 35 km/h, but nice power/weight ratio gives pretty decent acceleration. This vehicle doesn't need to be a speed demon anyway since its place is in the last line of the attack. The biggest weakness of Conway is his armor, even if it is better than in the previously described vehicles. The hull still isn't well protected, but the huge turret has been reinforced in some spots and he can bounce off some bullets.

This vehicle in the right hands and with fully trained crew can deal great damage to enemy team. The best tactic is to shoot at enemies from hiding, keeping yourself as far away from the battlefield as possible. It is a good idea to change your position from time to time to make it harder for enemies to eliminate you. When there is artillery in enemy team, it is required.

You have the best cannon and turret mounted already in the newly-bought tank, so all you have left to do is develop the best engine, which will greatly increase vehicles mobility. 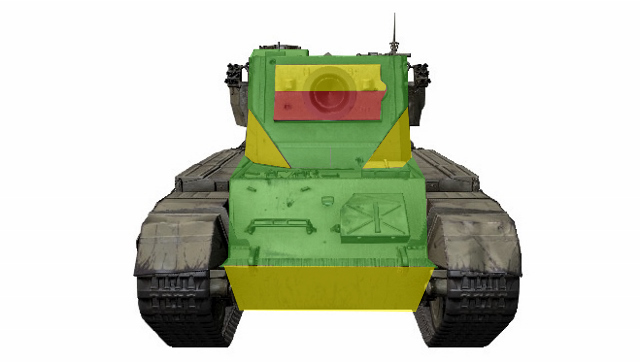 Conway, similarly to other tanks in its line, doesn't have a good armor. He does have a huge turret that is rather easy to penetrate, that is if you know where to shoot. You must avoid shooting at the turret's mantlet. It is divided into two parts. If you have to, then shoot the upper part, which is about 150mm thick. But under no circumstances don't shoot at the lower part, the armor is 250mm-300mm thick there. You should avoid shooting the armor plates at the lower corners of the vehicle. They are only 140mm thick, but they are well angled. Real armor thickness at those points is around 200mm. Other parts of the turrets are rather easy to penetrate. But if you have the opportunity, shoot the hull. Although it is well angled, it has only 76mm thickness. It is better to shoot the upper plate. Both upper and lower plates have the same thickness and angle, but usually your cannon will be higher than the lower plate, what would have increased the shot angle. The sides and back of the vehicle isn't well armed and you can easily shoot it with the high-explosive ammunition.

Use terrain cover to hide your tank. Trees, bushes, ruins - all of them increase your survival chances.

To play effectively, camouflage net, binocular telescope and sixth sense commander ability are mandatory. Camouflage ability for the entire crew is a good idea as well. Due to the size of the turret, the vehicle doesn't have too good camouflage indicator.

Beware of enemy artillery. Due to the weakness of your hull armor you're a perfect target. Additionally, every experienced artilleryman will know that he should firstly eliminate you.

Keep yourself away from the frontline. Detect enemies with the aid of your team members or the binocular telescope. When enemy vehicles are dangerously close, try to retreat unnoticed. Avoid direct confrontation whenever it is possible.

Aim mostly in the Conway's hull. The turret isn't too thick, but it can ricochet some of the bullets.

Avoid direct confrontation on open territory. Conway has good penetration and deadly rate of fire. He has a fair amount of health points as well. He would probably be victorious in such battle.

Don't try to outmaneuver him on great distance, unless you're certain that he haven't seen you. If you get close to Conway the best option is to shot the track. Enemy turret rotates very slow and you will be able to easily outmaneuver him.

When you're on the side or back of the enemy you can load the high-explosive ammunition. The armor at those spots is very thin and the damage dealt will be massive.