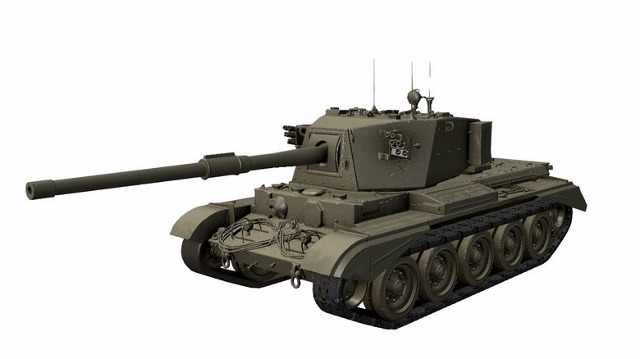 Charioteer is a British tank destroyer, Challenger's successor. It has many of its predecessor attributes and a much better cannon. This vehicle can be treated like a medium tank. He has a X level cannon - 105 mm AT Gun L7. For a tier VIII vehicle, his cannon's attributes are amazing. Bullets fired from it have 268mm penetration and they deal 390 damage. This cannon has rate of fire typical for a tier X medium tanks and is very accurate. It has some weaknesses as well. The biggest is the fact that you will be thrown against tier IX and X enemies. Situations when you're on the top will be very rare. Another advantage of Charioteer is his mobility. It's even better than in Challenger. Top speed hasn't changed and it is still 52 km/h, but the power/weight ratio has improved. Thanks to that, the tank has better acceleration and you will be able to get to a selected map point even quicker. Similar to the rest of new British tank destroyers line, the armor in Charioteer is just symbolical. It's even worse than in his predecessor. Armor thickness is never greater than 100mm, no matter what angle did you shot him. Due to this, one doesn't need to aim to accurate, as any hit will penetrate Chariotter's armor.

With this vehicle it is recommended to play as with a classical tank destroyer. The speed of this tank should be used to get to the right position and for retreat to another one if necessary. You should get some camouflage net and binocular telescope as well. Of course, you can play this tank like a medium one, but in battles on level IX and X you will meet experienced players and speed alone won't be enough to survive on the battlefield. The lack of armor makes you a target than can be killed with one shot, even although you have 1050 health points.

You should already have most of the equipment developed. All that is left is to focus on developing two cannons. First one is QQF 20-pdr AT Gun Type B Barrel, although in case of this vehicle it is just a temporary option, even though it has quite nice specifications. The best cannon is 105 mm AT Gun L7, which will make fighting even the tier 10 vehicles pretty comfortable.

There is not much to say about Charioteer's armor. The armor is so thin that you should behave as if there was no armor at all. It can be shot anywhere, on any angle. High-explosive ammunition will be very effective against Charioteer.

...as the driver of the Charioteer?

Use terrain covers to hide your tank. Bushes, trees, ruins - all of them increase your chances for survival.

Mounting a camouflage net is necessary. You can't allow to be found by enemy. Your vehicle has a little camouflage factor, so a net will be very useful.

Tank commander must have the Sixth sense ability. Without it playing is almost impossible. You must know when you have been discovered by enemy. Enemy artillery is worst for you, in 99% cases it can one-shot you.

Change your position on the battlefield as often as it is possible. If you are discovered, position change is necessary. Your spot should be in a safe distance from the center of the fights as well.

If you have a cannon with good rate of fire, try to detrack Charioteer. By doing so, you will remove the only Charioteer's defense - his speed. When the vehicle is immobilized, it becomes a perfect target and can be killed in a matter of few seconds.

Load some high-explosive ammunition. With the thickness of Charioteer's armor penetration is guaranteed, and the damage done by those bullets will be greater.

Don't try frontal assault. Although it is a tier VIII vehicle, it has a level X cannon with good penetration that is enough to pierce through any vehicle in the game.