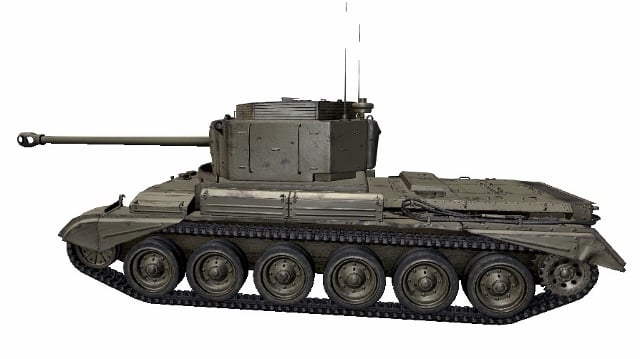 Challenger is the first in the line of new, British tank destroyers based on the suspension of medium tanks. This vehicle connects traits of a medium tanks with features typical for a tank destroyer. In this case the characteristics of a medium tank are dominant. Once again you will be given the OQF 17-pdr AT Gun Mk. VII cannon, which was good on V and VI tier, but in a level VII destroyer might force you to aim more precisely and outmaneuver your enemy. The rate of fire hasn't changed, but accuracy and focus of the viewfinder have been upgraded. Thanks to this just a moment after stopping the vehicle you're ready to give a precise shot. The tank has a rotating turret which makes him even more similar to medium tank. But it is worth remembering that the rotation is slow and in many cases you should help it by moving the hull as well. The vehicle has a great 650HP engine while its weight is pretty small. Top speed has been set at 52 km/h. All of that combined and Challenger becomes probably the fastest tank destroyer of its tier. The biggest disadvantage of Challenger is its armor, and more specifically, lack of one. Front armor has theoretically 88mm thickness, but it is combined if simple, iron plates that won't stop even medium VI tier tanks. Your enemies will be mostly of tier VIII and even IX.

Tactics while playing this vehicle should be different than with other tank destroyers. You should play him like a medium or even light assault tank. Of course, it is possible to shoot from greater distance, but low camouflage makes you an easy target to be spotted by enemies. The best strategy is to keep on the second line of the assault and use mobility to avoid enemy fire.

In the Challenger case you have the best cannon developed since the beginning. Your task is to upgrade suspension and the engine as quickly as possible. You should remember about developing the best radiostation as well - the WS No. 22. Her reach is 700. Such great distance allows you to know what is the situation even on the other side of the map. 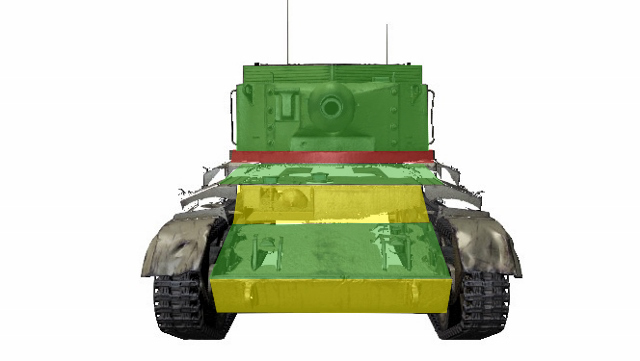 Armor of the Challenger is not one of its advantages. It has two places you shouldn't shoot at nevertheless. The first one is the turrets mantlet. If you're unlucky you might hit a point where the armor is 170mm thick. The second, not obvious spot you should avoid, is the back of the turret. Usually armor at that spot is symbolical and it is easy to penetrate it. In case of Challenger, it is different. The back plate of the turret has 200 thickness and it can withstand even a bullet shot by a tier IX vehicle. The rest of the Challenger is far worse. The maximum thickness of the armor is 88mm without any angle. Unless you are shooting under large angle, you should easily penetrate it. The turret doesn't even have a mantlet, so you can shoot it in whatever point you want and you will get through anyway.

...as the driver of the Challenger?

During combat you can choose one of the two tactics. The first is to rush forward along with light and medium tanks and try to attack enemy tanks from sides or the back . The second is to play like a typical tank destroyer. In that case, hide in the bushes, activate the camouflage net and use the reach of the radiostation.

Try aiming the weak spots on enemy armor. Your cannon is accurate enough to pierce even IX tier vehicles if you know where to shoot.

If you have chosen the medium tank tactic, stay on the move the whole time, hide behind cover, ride out, give one or two shots and then change your position on the map.

Avoid direct confrontation with other vehicles. You have to little health points and too thin armor to win such battle.

When you face Challenger you can use high-explosive ammunition. Such bullet should easily pierce through enemy turret and additionally damage the modules and hurt the crew.

When you are being assaulted from greater distance, keep moving. Challenger has very accurate gun, but with average penetration. If you move even a little, it will be harder for him to hit your weakspots.

When you're driving a medium or light tank, don't try to outmaneuver your enemy. With his mobility and rotating turret, you won't have great chances for success. Such tactic is good only of enemy is detracked and you can use the low speed of rotation of Challenger's turret.

Don't shoot the back of Challenger's turret. The armor at that spot has 200mm thickness. You can shoot any other place instead.