The 113 is the last Chinese heavy tank available in the game. What is interesting, this vehicle, in its construction and playing style, resembles a medium tank, rather than a sluggish steel giant. It is poorly armored and its only protection is the resistant turret, the glacis plate, which is inclined at a considerable angle and its high top speed. It is armed with the 122mm 60-122T cannon, which is, unfortunately, one of the weakest weapons available at tier ten. In spite of its unique features, the 113 is not too good a vehicle: it is difficult to handle and it does not provide sufficient results- in this case, it is better to invest in the actual medium tank: the Chinese 121.

The 113 has the elite status from the very beginning. 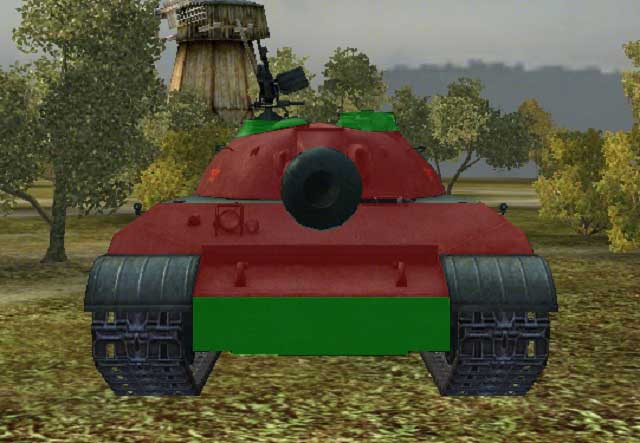 The pattern of the front armoring is surprisingly simple: the glacis plate is inclined at an angle of 68 degrees, which is why most of the shells fired at it will ricochet. If the 113 is slightly angled, this part of the armoring is, virtually, indestructible. Fortunately enough, the more you approach the tank, and the more you lower the cannon, the easier it gets to penetrate this part. The lower-front armor plate is very weak, possible to damage even for tier six tanks. That is why it is the best target during a frontal attack.

The turret is just as resistant as in the predecessors - the front is nearly impenetrable, the sides occasionally ricochet and the rear, nearly always, takes damage.