The 110 is a vehicle that combines the characteristic features of the IS-2 and the Soviet IS-3 heavy tanks. It also has the "pike-nose" which, due to its inclination, is capable of reflecting the majority of the enemy shots. Apart from that it has a high top speed and a turret resistant to damage. Unlike the IS series tanks, it is armed with a cannon of a smaller caliber: the fast-firing 100mm 62-100T.

From the very beginning, your tank should be using the modules developed for the IS-2: the 122mm D-25T cannon and the 12150LS driving unit. In the first place, you will have to develop new suspension, then the turret and the 100mm 62-100T cannon. 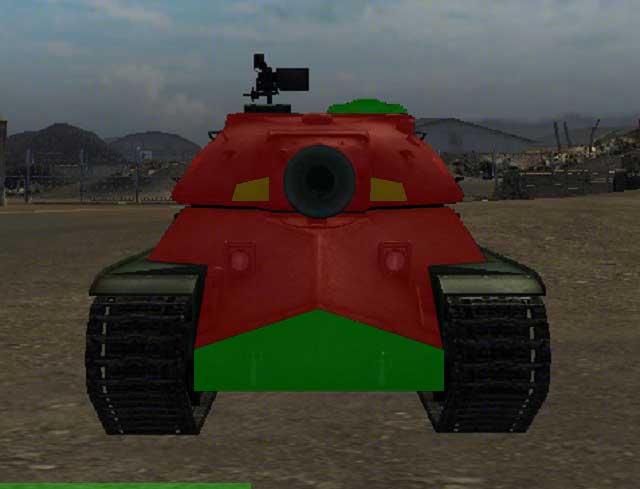 The glacis plate, i.e. the pike-nose, is virtually invulnerable to fire from cannons of the penetration value ranging 200-220mm; the better cannons are capable of penetrating it but, in spite of that, I recommend against firing at this fragment of the 110 tank. A much better points is the lower (triangular) plate - you can damage it using cannons of 175mm penetration value. In the case, in which the opponent is angled, you can aim at the sides of the nose - without the protection ensured by the natural, big angle of attack, you can penetrate it without major problems.

Unlike in the Soviet IS-3 the sides of the 110 are very vulnerable to fire, because it does not have the double armor layer. Taking shells to the tracks is still possible, but it has been limited to the lowest caliber cannons- shells fired from cannons of the penetration value of 260mm can damage you without major problems.

The turret of the 110 is nearly identical with the one on the Soviet IS-8 heavy tank. It is rounded and it has 201mm of armor at the front, thanks to which it is capable of repelling the majority of shells aimed at it. Only the cannons of tier ten vehicles, which use premium shells, are capable of piercing it. In the case in which you use cannons of penetration values (around 220mm) you can aim at the point marked in the picture, but you need to keep in mind that it may ricochet.