The IS-7 is a continuation of the tradition started with the IS-3 and the IS-8. Again, you will deal here with a quite mobile vehicle which, unlike its predecessors, has been equipped with one of the best armors in the game. The high top speed, combined with the reliable driving unit and a very good cannon, makes this tank one of the most dangerous opponents that you can meet in the World of Tanks - not without a reason, this vehicle has dominated clan games for a long time. Today, because of the high penetration cannons that appeared, this tank has somewhat lost its significance, but you still need to approach this vehicle carefully. It has impressive parameters and is often able to win the entire battle.

IS-7 has elite status from the very beginning.

Skills and perks: sixth sense for the commander, repair for the rest of the crew. Then, brothers in arms for the entire crew. You can also try selecting skills that improve the tank's handling, like the clutch braking or the off-road driving. 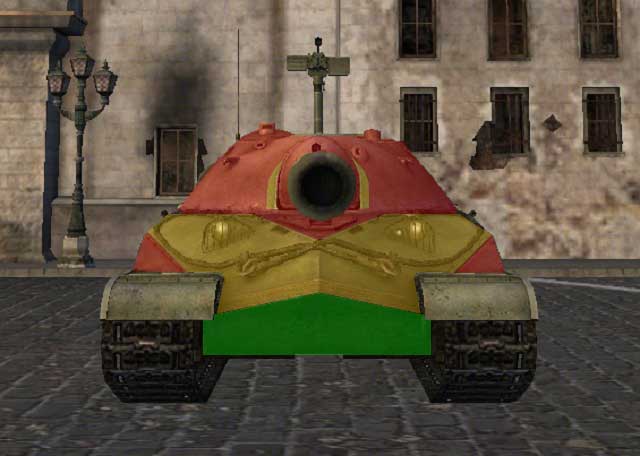 In spite of the armoring, of the thickness of 150mm, the pike-nose, and the angle of the individual fragments, make the IS-7 capable of repelling any shell fired at it. While attacking this tank from the front, you should attack the lower-front armor plate - with good angling (at the right angle, or while the opponent is coming up the hill) you can penetrate it with cannons of the penetration value of 200-220mm. the glacis plate is practically invulnerable to fire from cannons below 260mm of penetration value and the users of these cannons should pick the right targets. While opposite the IS-7, avoid shooting at the nose itself - it is best to aim into the area of the headlights. In the case in which the enemy is inclined at a slight angle, this will be the only weak point in its glacis plate.

The sides of the IS-7 are much weaker than it might seem. It is enough that the opponent is angled at 30 degrees to you and you will be able to penetrate its skirt with a cannon of the penetration value of 220mm, or higher. The most important thing, in this case, is to fire well-aimed shots between the tracks and the skirt.

The turret of the IS-7 is indestructible at its front side. You can try hitting the cupola, or place your shell right next to the cannon armor, but in most cases this will not harm the enemy. Additionally, the turret of the IS-7 is very resistant to shots from the side - in this case, it is better to aim right next to the cupola - this fragment has been situated at a smaller angle and it is easier to penetrate it.