The IS-4 is an improved version of the ST-I. This tank is better, than its predecessor, in any respect: it is better armored, the reload time and the focus time are shorter, it has higher top speed and a better engine. The playing style remains the same, but removing the flaws of the ST-I will allows you to remain in battle for longer than in the case of the ST-I. 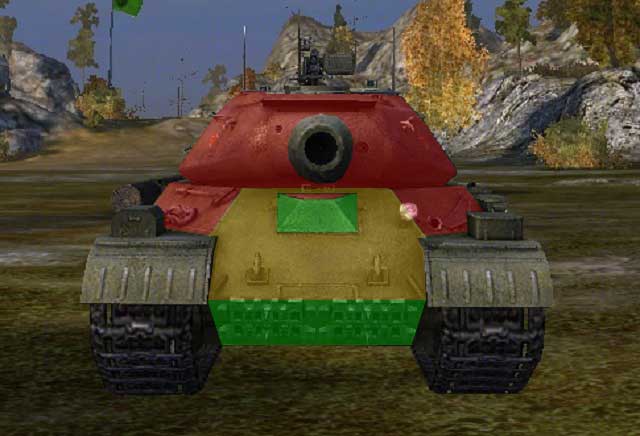 The general armoring pattern for the IS-4 is the same as for the ST-I. Unfortunately, there are several important differences between the two. First of all: the thickness of the lower-front armor has increased - it is still the weakest point on the tank, when it comes to the front armor, but this time you will need a cannon, of the penetration value of, above 200mm (220mm or more is preferred) to deal damage on a regular basis. Also the driver's hatch turned much harder and repels shots more often. The glacis plate is very resistant to fire and, just like in the case of the ST-I, only cannons of the penetration value of 260mm, or higher, are capable of penetrating it on a regular basis.

The sides of the tank became more resistant than in the predecessor. The 160mm thick armor, after it is angled, is capable of repelling many shells, which is why, while attacking the IS-4 from the side, you should aim right below the skirt over the tracks, so that you can hit the lower-side part of the hull. With cannons of larger penetration, you can easily aim at the upper side of the hull - most of the shots should deal damage.

The turret is, virtually, indestructible. There are two small points that are very difficult to find, and which can be penetrated with weaker cannons (of around 200mm penetration value): the roof of the turret, right behind the cannon armor, and the cupola. Apart from that, those armed with better cannons can hit the front side of the turret on both sides of the cannon's yoke - this point is much more resistant, but it is the only way to damage the IS-4, in the case in which it glues to you.