IS-8 is the successor of the IS-3 heavy tank. Practically all the parameters, of the predecessor, have been enhanced here: the armor is thicker, a better cannon is mounted, the top speed is higher. Unfortunately, due to the fact that it encounters the regular tier nine and ten tanks, the slight improvements in the distribution of the armoring, have not improved this tank's resistance to fire greatly. For that reason, unlike the IS-3, which was a vehicle to breach enemy lines, playing the IS-8 resembles playing on a very heavy medium tank. It should circle the enemy forces, harass them with constant attacks and search for the most convenient moment to strike, and then join the main assault force to help eliminate the vehicles that remained in the game.

Again, the most important piece of equipment which you will have to develop is the 122mm M62-T2 cannon. Unfortunately, to mount it onto the vehicle, you are going to need to develop new suspension. Then, develop a new engine, new turret and the radio. 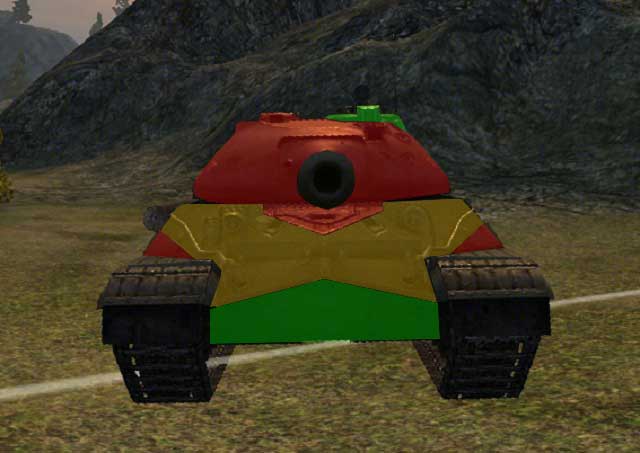 The general armoring pattern of the IS-8 is nearly identical with the one on the IS-3. Unfortunately, the armor is slightly thicker than on the predecessor and the penetration value of the cannons has gone up, alongside with the tank's tier, these are the reasons for some changes in the vehicle's weak points.

The glacis plate is still pike-shaped, but it is resistant only to shells of the penetration value of 200mm. The cannons that fire these shells should aim at the weak point known from the IS-3: the lower-front armor plate . Tank equipped with better cannons can easily take on the glacis plate - practically, any direct hit deals damage.

Unfortunately, the IS-8 has lost its side armor, which the IS-3 had. The double armoring is still there, but it only protects the central part of the vehicle - a direct hit above it, as well as below, penetrate the tank's armor without any problems.

The turret is as resistant as in the case of the predecessor - while fighting enemies, whose cannon descent is small, you can try to stand side-to-side with them. Also, hiding behind elevations or the other natural obstacles, also does the job - in this case, you will have to aim at the cupola on the top of the IS-8's turret.