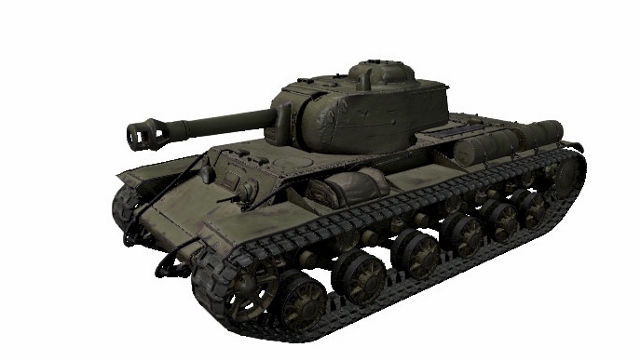 KV-1S has been greatly changes a while ago. The only thing similar to the previous tank is basically the name. All parameters has been changed, including the tier. Currently KV-1S is on V tier. The armor and the cannon have been weakened the most. The front plate is 70mm thick and is set under a small angle. It is still quite good armor for a V level tank. It's far worse with the cannon. KV-1S can have one of the two types of cannons, 122 mm Howitzer S-41 or 85mm S-31. The first one has low accuracy and penetration but deals a great amount of damage. The second one is more accurate, has low reload time, 120mm penetration and 160 damage points. It is quite a good cannon for a V level vehicle. The 122mm cannon is suggested anyway - it requires you to aim more precisely and to fight in close, but the damage dealt compensates that. You shoot with a high-explosive ammo so even if you won't penetrate enemy armor you will deal some damage. KV-1S is usually randomized on the top of the list so you will be able to destroy most enemies with a single shot. The vehicle has 600HP engine and it allows him to accelerate to 43 km/h. You shouldn't expect good acceleration speed from such heavy tank.

First you should develop two best cannons. Play few battles with both of them to see which one better suits you. To unlock the cannons it is possible that you will have to develop new turret and suspension first. 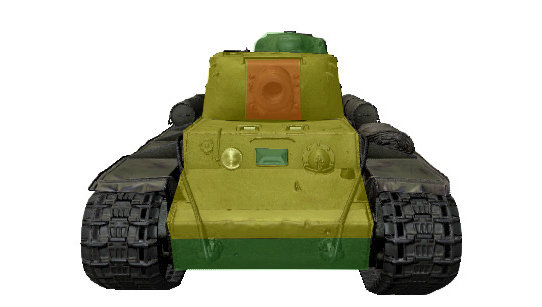 KV-1S armor gives enough protection for a tier V vehicle. Sadly, if your enemies are tanks from higher levels they will easily penetrate your armor from every side. The best position to shoot is the lower, perpendicular plate. Bullets should get there without any trouble. From a close distance you can shoot the driver viewfinder in the middle or commander hatch. It is not recommended to shoot near the base of the cannon since the armor can have even 150mm there. Back and side armor of KV-1S has the same thickness as the front one but is set on the right angle. It is better to shoot the trunk of the vehicle as the armor is 20mm less thick there.

Your tactic should depend mostly on what cannon do you have mounted. If you have the 122mm one you should get as close to the enemy as possible. If you have the 85mm cannon you can shoot from greater distance.

Try to put out only the turret, it is better armored than the rest of the vehicle.

You don't need to be afraid of duels 1vs1 with tanks that have level V or lower. You have great firepower.

If you can't penetrate the front armor try shooting the driver's sight or the lower plate.

Take caution what sort of cannon is mounted on the enemy vehicle. In the city the howitzer is more dangerous, and in greater distance the 85mm cannon is more deadly.

If your enemy has howitzer mounted and you're driving a weakly-armored tank you should increase your distance as quickly as possible. One shot will end with destruction of your tank. If you have a tank with good armor you can attack him, but make sure that your enemy can only shoot the front armor.