The T-62A is the last medium tank available for Russians. This vehicle is discernibly slower than its predecessor, and much worse armored. In exchange for that, it has immense mobility (its rotation time is only several seconds long) and armed with a cannon of high rate of fire: the 100mm D-54TS. This cannon is capable of firing a shell every 5 seconds and so, damage that the T-62A can deal, per minute, is one of the highest in the game. Due to the relatively weak armoring, this vehicle should fight over medium distances and implement the "hit and flee" tactic. It is perfect for fighting in the urban environment, where it is very easy to immobilize the enemy vehicle and lay fire down on its weak points. The T-62A is not only a reliable tank, but also one of the most convenient vehicle to drive, available in the World of Tanks.

T-62A has the elite status from the very beginning. 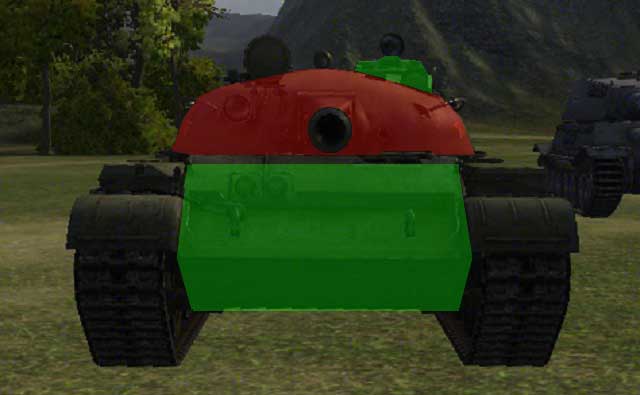 The armoring pattern of the T-62A is identical with the one on the T-54. The most resistant fragment of the hull is the glacis plate, which is capable of reflecting shells of 175mm penetration value and, if angled, also 200mm. The lower armor plate is easy to penetrate, and so are the sides and the rear of the vehicle.

The turret of the T-62A is even more resistant than in the case of the T-54, and only several cannons, firing premium shells, are capable of damaging it. The back of the turret can still be penetrated with any given cannon in the game.