The KV-13 is not a typical medium tank: it combines speed with reliable armor. Unfortunately, due to the fact that it is a transitory tank, which connects the medium and heavy tanks branches, and the lack of direct descendants, this vehicle is not used very often. An additional downside are the frequent clashes with tier nine vehicles, where the KV-13 has immense problems damaging the enemy.

From the very beginning, you have access to the 76mm S-54 cannon, and to the V-2IS engine- you should mount these immediately. Then, develop new suspension and a turret. Also, mount the 85mm D5T-85BM cannon. Now, you can develop the remaining modules. 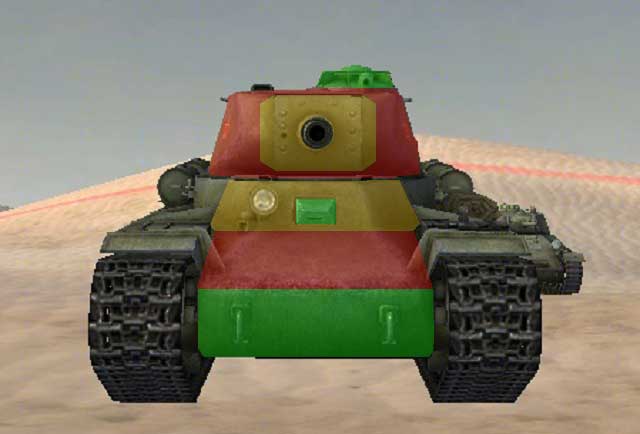 The front armoring of the KV-13 resembles the front-side of the IS, in its shape. You can find two weak points here: the lower-front armor plate and the driver's visor. The glacis plate is capable of withstanding direct hits of the penetration value of 130mm and, after the tank is angled, even 150mm. The central part of the glacis plate, due to its inclination, will usually repel the shells fired at it. The sides of the KV-13 are protected both by the thick tracks and d armoring of the thickness of 85mm. After the vehicle is situated at an angle of, around 30 degrees, it will require a cannon of the penetration value of 200mm, or higher, to penetrate it on a regular basis.

The turret in the KV-13 is similar, in its shape, to the one that you can see on the IS. The front armor, in combination with the cannon armor, will be penetrated, on a regular basis, by cannons of the penetration value of 160mm; shots fired at the sides of the turret may easily slide off and ricochet.