The Conqueror is the successor of the Caernarvon; the hull of this tank is identical with one discernible difference: the new turret equipped with one of the best cannons in the game - the 120mm L1A1 cannon. As you unlock the successive modules, you will get the feeling that you move on the Caernarvon with a larger pool of health points, but this ordeal is worth it: the elite Conqueror is a dangerous opponent whose name of the universal tank is fully earned.

The development of the Conqueror is immensely time-consuming, which is why you should use up the spare experience whenever possible. You start by mounting the OQF 20-pdr Type B Barrel cannon, developed for the Caernarvon. Then, develop the turret and suspension, and finally the 120mm L1A1 cannon. You will receive the Rolls-Royce Griffon engine for free, after you unlock the FV215b - if the mobility of the Conqueror works for you, you can easily skip this step. 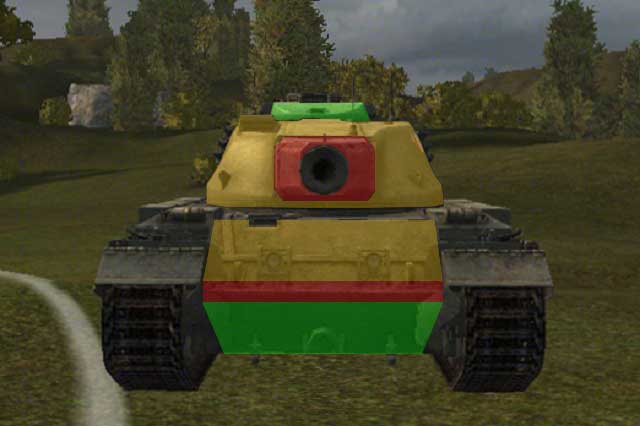 The hull of the Conqueror is identical with the one in the Caernarvon. The glacis plate repels shells, of the penetration value of 175mm, on a regular basis, but it will have considerable problems with stopping better ammo. The lower-front armor plate is very thin and, in spite of being inclined at a considerable angle, it can be pierced by most shells. The sides of the Conqueror are very weak and they do not protect the tank from any attack. When positioned at an angle, the vehicle can be easily penetrated both on the lower-front plate and the side armor mentioned above.

The turret of the Conqueror is quite weak and, if you fire at specific points, you will be able to penetrate it with cannons, of the penetration value of 175mm. The cupola, the turret ring, or the sides of the turret, right next to the cannon - all of these points are easy to damage. The cannon armor is, practically, indestructible - if you aim at this point, the shell will deal no damage to the Conqueror.

The Conqueror is highly vulnerable to critical hits. If you attack its rear, you can easily set it on fire and shots fired against the lower-front armor often damage the ammo compartment and wound the driver.

...as the driver of the Conqueror?