The Black Prince is the last one of the British infantry tanks. Just like its predecessors, this tank is well armored, has a lot of health points and has a cannon of high rate of fire. Still, its top speed and maneuverability are low. In spite of its downsides, it is a very dangerous opponent, capable of defeating any vehicle of its own tier, while in one-on-one duels - it is a reliable but, unfortunately, sluggish tank.

Start by developing the OQF 17-pdr cannon Mk. VII, Then, unlock the Rolls-Royce Meteor engine, suspension and the radio.

Skills and perks: sixth sense for the commander, repair for the rest of the crew. Then, brothers in arms for the entire crew. You can also try selecting the skills that improve on the performance of the tank, such as the clutch braking or the off-road driving. 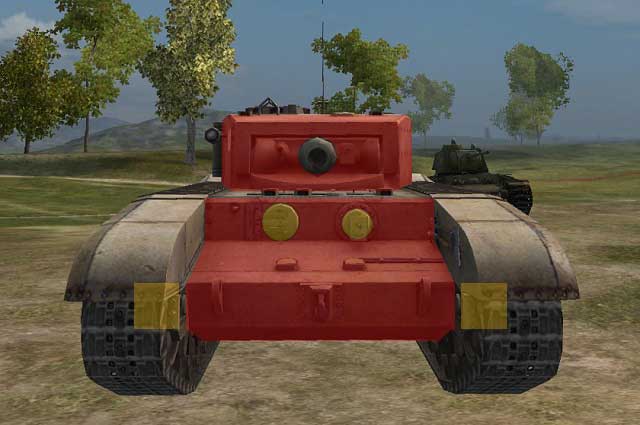 The front armoring of the Black Prince's is almost identical with the one on the Churchill VII. It is 152mm thick all over and its only weak points is the fragment of the hull behind the tracks. With the cannon of the penetration value of 200mm, you can easily fire at the front of the Black Prince - only occasionally will the shots ricochet. The sides of the tank, if angled, are resistant to most attacks - fire at them only if they are inclined at a low angle.

The front of the Black Prince's turret is its most resistant fragment - it has a very thick plate capable of repelling any shot fired at it. While firing at the turret of this tank, you should aim at the small, flat fragments and avoid hitting its center. The sides are considerably weaker and any cannon of the seventh tier should be capable of penetrating it without major problems.

...as the driver of the Black Prince?

...against the Black Prince?