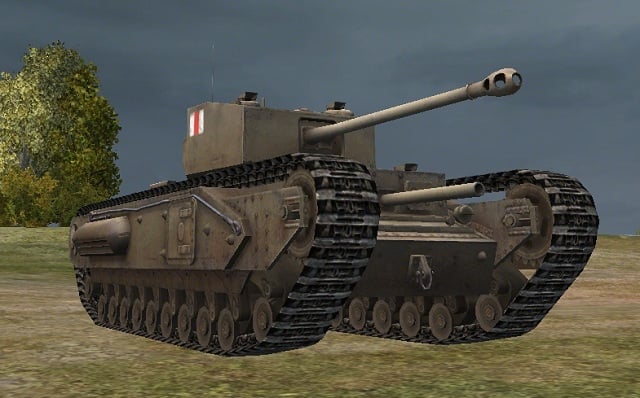 Churchill I is the first British heavy tank available in the game. This vehicle is, to some extent, a counterpart of the Soviet KV-1: it is sluggish, well armored, has a lot of health points and a cannon that can deal with opponents in no time at all. This tank is good for both combat over medium distance, where it is capable of destroying the enemy using the high accuracy of the 75mm Vickers HV cannon, and also block the crucial points, or lead an attack, while taking on the enemy fire. Mastering this vehicle will be profitable for you because, the next two vehicles (Churchill VII and the Black Prince) are nearly identical in how they play.

Before you start playing with Churchill I, I recommend that you develop completely the Valentine Mk. III medium tank, thanks to which you will have access to several, already unlocked cannons. Depending on your preferences, you can remain with the QF 2-pdr Mk. X cannon, or mount OQF 3-inch Howitzer Mk. I. the next step is the development of the new suspension and the turret. After you mount these modules, you will be able to replace armament to the 75mm cannon Mk. V. Now you only have to unlock, the slightly more effective, 75mm Vickers HV cannon, the engine and the radio.

Skills and perks: sixth sense for the commander, repair for the rest of the crew. Then, brothers in arms for the entire crew. You can also try selecting a skill that improves on the tank handling, like the clutch braking or the off-road driving. 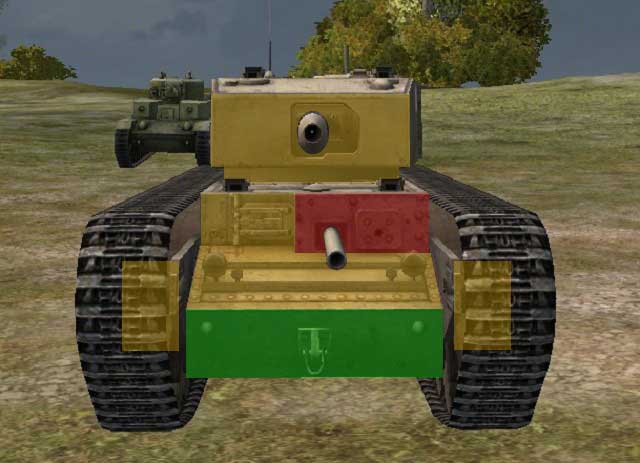 At first look, Churchill I may look as if it was nearly indestructible but, the practice will quickly verify that. The plates of the armoring, in spite of their thickness, are quite easy to penetrate, because the angle of their inclination is not too high. For that reason, if only you have the cannon capable of penetrating 100mm of armor, you only need to position yourself at the angle of 90 degrees, towards the Churchill I and start your fire. While attacking the tank from the front, you can aim at the tracks, because unlike in the case of the other vehicles, you can deal damage if you score a hit. Apart from that, at the front, there are several smaller points that are vulnerable to fire - they have been marked in the picture. While attacking Churchill I from the side, it is sufficient to aim at the center of the hull, best towards the rear of the vehicle, in hope to set the vehicle on fire.

Churchill I, just like most of the vehicles, has access to two various turrets. It is worth knowing, however, that the vehicle, while equipped with its basic version, has the front much better armored than while mounted with the improved turret. If you encounter the Churchill I with 650 health points , do not attack this point. In the case, in which the enemy tank has 700 health points you can easily fire at the turret - it is much weaker and the cannons, of the penetration value of 100mm, can penetrate it without any problems.

I recommend against attacking the Churchill I if it is angled towards you- both its sides and the front reflect a lot of shells, and the enemy is capable of defeating you, thanks to its firepower.

...as the driver of the Churchill I?

...against the Churchill I?