T57 Heavy is the crowning jewel of the line of American tanks equipped with revolver magazines. This tanks is both the heaviest and the best armored vehicles in the branch initialized by the T71. Just like its predecessors, i.e. the T69 and the T54E1 medium tanks , it is a support vehicle that moves directly behind the frontline and appears near the enemy only to fire the entire magazine, after which it retreats and waits for another opportunity to strike.

When it comes to playing style, this tank is very similar to the French AMX 50Bbut it is slightly slower and slightly better armored. Additionally, its reload times are shorter (22 seconds at most) which allows it to return to battle more often.

The T57 Heavy has the elite status from the very beginning.

Skills and perks: sixth sense for the commander, repair for the rest of the crew. Then, brothers in arms for the entire crew. Alternatively, you can choose the snap shot (the gunner) and smooth ride (the driver). 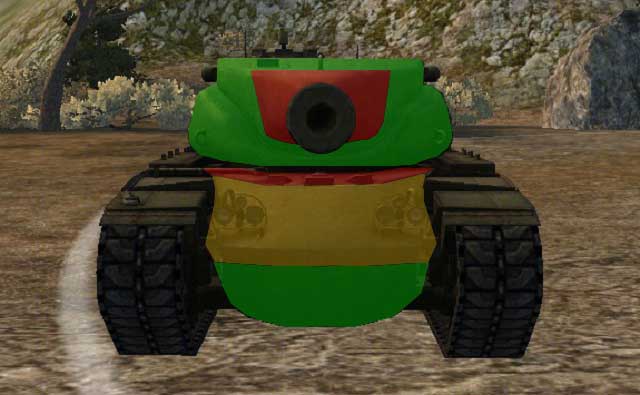 Unlike the typical heavy tanks, the T57 Heavy is quite poorly armored. Its hull resembles tanks such as the M103 or the T110E5 and has similar weak points: the lower front armor is the most vulnerable to fire and the weld and the glacis plate are capable of repelling some of the shell. This vehicle, just like the majority of the American vehicles, has thick tracks, which perfectly increase the resistance of the side armor, if the hull is slightly angled. Enemy shells at the right angle, or into the back of the vehicle, are unstoppable and always deal full damage.

The oscillating turret of the T57 Heavy is just as vulnerable as the hull. Due to its unique design, it was impossible to apply thicker armoring and an additional cannon armor plate, which is why, every shell that hits a flat surface, should be capable of penetrating it. Only shells that impact the area around the cannon may ricochet sometimes.