This tank is a developed version of the WZ-120. In comparison with its predecessor, this tank has thicker armor of the hull and of the turret, higher number of health points and an even more effective cannon: 122mm 60-122TG of the increased penetration value and high rate of fire. The combination of good mobility, low-profiled shape, excellent camouflage and immense firepower, makes the 121 one of the most dangerous enemies in the battlefield. Fortunately, the limited cannon vertical operation angle, considerably limits the tank's effectiveness in hilly and mountainous areas.

From the very beginning, the 121 has the elite status. 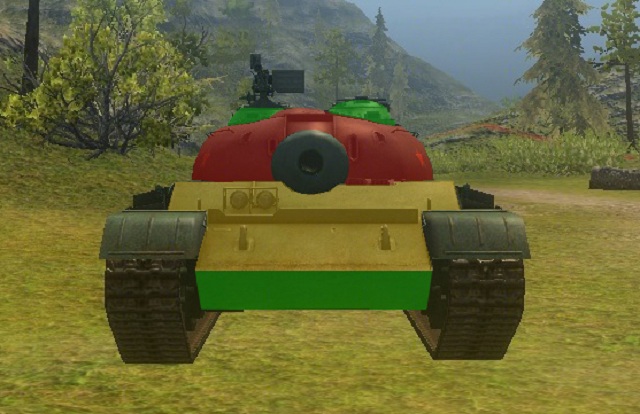 The armoring pattern of the 121 is identical with the one in the WZ-120. The glacis plate has been thickened a bit thanks to which, after it is slightly angled, it will be able to ensure you with some protection against cannons, of the penetration value of 220mm. The sides and the rear are, still, very weak and any tank that you encounter will be capable of damaging them.

The turret of the 121 is excellently armored and, thanks to its semi-spherical shape, most shells will not deal damage to you. Only the well-aimed shots fired, from tier X cannons, will be capable of penetrating it.