The T-34-1 is the first, entirely Chinese construction, which draws extensively on the solutions implemented in the Soviet vehicles of the T-34 series. Unlike its Soviet counterparts, its turret, which now has a semi-spherical shape, is better armored and uses the 100mm cannon, thanks to which it can easily conduct fire from behind low walls an attack frontally some of the vehicles of the IS series, or the German Tigers. While in combat with vehicles of higher tiers, thanks to its mobility, it can flank the enemy and lay fire down on its weak points. In general terms, it is an excellent vehicle, which can serve as a training ground before you change to Chinese medium tanks of higher tiers.

The development of the T-34-1 should be started with developing a new suspension and then, the turret. Now, you will be able to mount the your vehicle with the 100mm 44-100JT cannon. The only thing left to do, then, is develop the missing engines and the radio to make the tank reach the elite rank.

Just like in the case of the other Chinese tanks, there are several relations here:

As you can see, while developing the T-34-1, you can save a lot of time, if only you unlock the successive heavy tanks. I recommend that you use the option of "automatic" development of new engines because, even without them, your vehicle is sufficiently mobile. 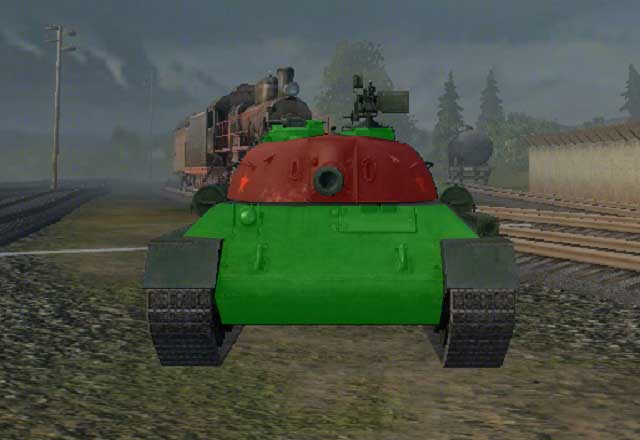 The armor of the T-34-1's hull is, as if, it was made of paper - practically any direct hit will penetrate it. It is only cannons of the lower tiers that will, sporadically, ricochet.

The improved turret of the T-34-1 is its advantage. The 170mm of armor, in combination with the spherical shape, can easily repel any shell fired by the vehicles of tiers V, VI and VII. The larger cannons, most usually, will penetrate the glacis plate but still, an ill-aimed shell will often slide down without dealing damage to you.

The ammo compartment is located at the back of the turret and directly under it; the engine, which is a standard, at the back of the hull. These modules have low number of health points: the T-34-1 will sporadically burst in fire or explode.