The E-50 Ausf.M is a modified version of the E-50 of the IX Tier. Its features are the increased amount of health points and much better mobility, in comparison with the predecessor. Additionally, it has been equipped with a better cannon, of the highest penetration value and accuracy, available for medium tanks. From the E-50 Ausf.M , also one of the greatest flaws, haunting all of the German tanks, has been eliminated - the gearbox is at the back of the vehicle, thanks to which this tank does not set on fire after being hit into the lower front armor.

The E-50 Ausf.M has the elite status from the very beginning. . 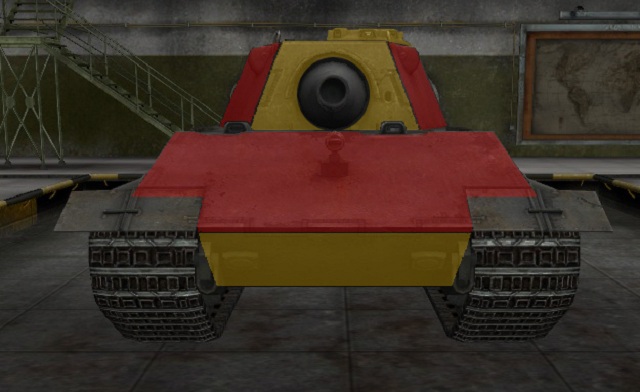 The armor pattern in the E-50 Ausf.M is identical with the E-50's. The only difference here is the location of the gearbox, which now is at the back of the vehicle. Thanks to this, direct hits into the lower front armor plate DO NOT set the tank on fire.

The glacis plate of the E-50 Ausf.M is a 150mm thick steel plate, inclined at a considerable angle. This fragment is practically impossible to damage, apart from some of the tier X cannons. Fortunately, the lower plate is, barely, 100mm thick, thanks to which cannons of the penetration value of 200mm , or higher, will be capable of damaging it. The sides and the rear of the tank are quite susceptible to damage, because they are protected by 80mm of armor.

The turret in the E-50 Ausf.M is similar, in shape, to the one that you have already seen on the Pz.Kpfw.V Panther and Panther II. Its glacis plate is 185mm thick but, it is quite small, due to which the majority of shells hits either the thick cannon armor or the side armor which is inclined at a considerable angle: as a result, the shell will ricochet and you will deal no damage to the enemy. While attacking the turret, you either need to take a good aim (this is usually possible only as late as in combat at short distance) or aim at its sides or its rear side.