The Indien-Panzer is quite unique vehicle. This very poorly armored tank, which is susceptible to damaging of modules, has very high mobility; additionally, it is armed with one of the best cannons available for tier VIII medium tanks. Thanks to the perfect angle of the cannon's operation, it can effectively use the "hull down" tactic and conduct accurate fire against the enemy, while remaining invulnerable to fire itself. The high penetration value of the 9cm KwK 54 cannon, in combination with the high damage and very high rate of fire, will allow you to eliminate successive enemies and, even win a direct exchange of fire in one-on-one dues with the other tier VIII medium tanks.

Before you start playing with the Indien-Panzer, I recommend that you first gather, at least, 14000 spare experience points and unlock the 8.8cm KwK 43 L/71 cannon, on another tank (the Panther I or the Tiger) - otherwise you are up for an ordeal.

You start the development with improving on the suspension (this is where you allocate the spare experience) and mounting the 8.8cm KwK 43 L/71 cannon. Unfortunately, this tank is very sluggish, which is why your next step will be to upgrade the engine to the MTU MB 837 A - this will improve the vehicle's mobility. The final step is to unlock the 9cm KwK 54 cannon and the radio that is missing here. 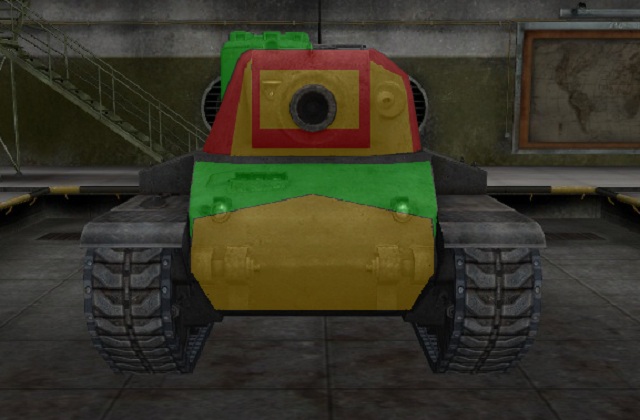 The hull of the Indien-Panzer has a very unique shape. Although its front is rounded and it is protected by 90mm armor, cannons of the penetration value of 175mm are capable of piercing it in practically, any spot. The weaker cannons should be aiming at the upper half of the glacis plate (60mm armor) or at the rounding of the glacis plate (90mm but at the right angle relative to you)

The turret's armor is also complicated. The machine gun nest on the right of the turret only has an armor that is 90mm thick. That is why, if you manage to hit it, it is easy to pierce it. The case is similar with the cupola - it is only protected with 90mm thick steel plate. The thickness of the cannon's armor is 130mm, which is why, cannons of the penetration value of 175mm, or higher, are capable of piercing it but, you should expect random ricochets.

The ammo compartment is located at the front of the hull (!), and the engine at the back. Several quick shots into the tank's front is capable of blowing the Indien-Panzer up.

...as the driver of the Indien-Panzer?