The Panther II is a direct descendant of the Pz.Kpfw. V Panther. This tank has an even thicker armor, a whole lot of health points, which puts it at a par with heavy tanks, and also a great 8.8cm KwK 43 L/71 cannon. Unfortunately, this vehicle still has the majority of its predecessor's flaws, like the modules that are susceptible to damage or the low mobility. The new cannon provides you with way more options in the battlefield - thanks to the nearly doubled damage, you can easily damage, or even destroy heavier tanks, and the penetration value of the cannon will allow you to pierce nearly any armor in the game. The Panther II is a perfect prelude for playing with the tier IX medium tank: E-50.

The development of the Panther II is to be started with mounting the 7.5cm KwK 45 L/100 cannon. The next step is developing a better suspension, which will allow you to use the Maybach HL 230 TRM P30 engine, which you have unlocked earlier (with the Pz.Kpfw.V Panther or the VK 30.02(M)). Now, you can improve on the turret and, finally, develop the ultimate 8.8cm KwK 43 L/71 cannon. 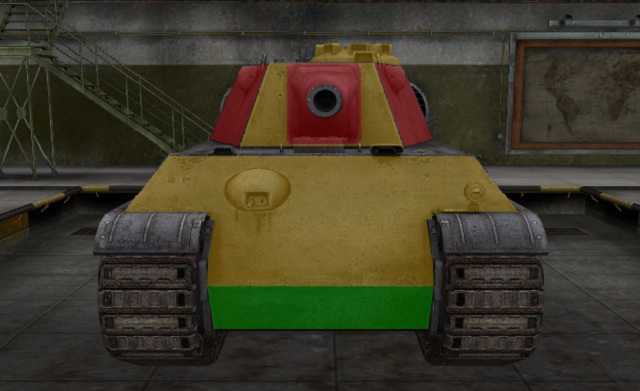 The shape of the glacis plate in the Panther II is the same as in the case of the Pz.Kpfw.V Panther. The 100mm thick steel plate, after being angled, is capable of repelling shells of, around, 175mm penetration value. The sides and the rear are, as always, vulnerable to fire.

The Panther II's turret is quite is quite resistant to direct hits. Its front plate is 120mm thick but, it is quite small, which results in most of the shells hitting the thick cannon armor, or the side armor inclined at a considerable angle: as a result, the shell will ricochet and you will deal no damage to the enemy. While attacking the turret, you need either to take a good aim, or target its sides or the back.

...as the driver of the Panther II?

...against the Panther II?