Another German medium tank prototype , the VK 30.01 (P), is a not too fortunate a construction. Its features are the small number of health points, poor acceleration and maneuverability, bulky construction, medium armor and a non-typical situation of the turret - which is situated at the front of the hull. To accompany all these shortcomings, this tank does not have too many strong points - the high top speed is useless in most cases and the armament does not stand out from the other tier VI vehicles. Unfortunately, if you are bent on unlocking the Tiger (P) or the Maus, you will have to play with this failed prototype .

The development of the VK 30.01 (P) is considered to be one of the longest, and the most difficult processes among tier VI vehicles. First of all, you are going to miss the mobility and firepower; unfortunately, both of these modules are quite expensive. I recommend that you first unlock the 8.8cm KwK 36 L/56 cannon, which will allow an interrupted exchange of fire with the other tier VI tanks. Now you can unlock the 2 x Porsche 2x Porsche Type 100/1 engine, which will ensure you with increased mobility. Another step is a new suspension and the turret. Now, you can mount the 7.5cm KwK 42 L/70 cannon, or stay with the 88mm cannon. After you have selected the armament appropriate for you, you can unlock all the other modules, as well as the Pz.Kpfw.VI Tiger (P) heavy tank. 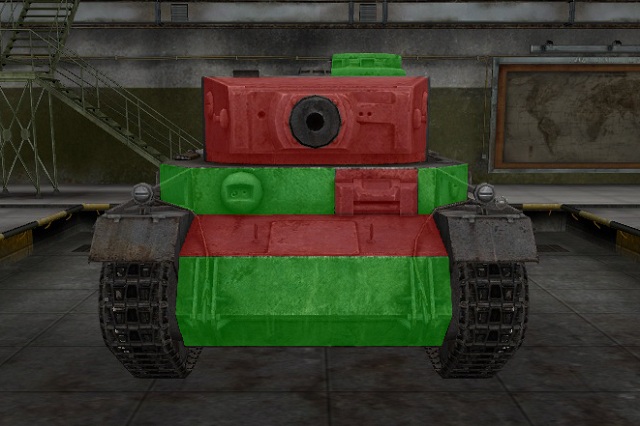 The hull of the VK 30.01 (P) is quite irregular in its shape : you can find here the elements that are easily damaged (the upper-front armor plate) as well as the ones that will reflect shells with quite irregular pattern (see: the screenshot). The heavily inclined fragments of the armor can often stop shells of the largest caliber, which is why, while shooting at this tank, it is better to position yourself at the right angle. Fortunately, this vehicle has one huge downside: the high and poorly armored sides. Each shot at its flank should deal damage to it.

The turret, when it comes to its shape, resembles the one seen in the Tigers - and unfortunately, it is similarly armored. The protection is resistant to impact and it will often save your tank from damage. The commander's cupola is a weaker point but, it is quite difficult to hit. This tank is best attacked from the side or from the back, where the turret is protected with just 82mm steel plate.