VK 30.01 (D) is a direct descendant of the Pz.Kpfw. III/IV. Just like its predecessor, it is a very swift vehicle of high mobility, equipped with good armor. Just like its predecessor, its armament is quite limited: again, you will have to use the cal. 75mm cannon. Among all German tier V medium tanks, this vehicle has the greatest horsepower to weight ratio, which is why it is best suited for the quick sojourns behind the enemy lines, or to circumvent the enemy's heavier vehicles. Its greatest shortcoming is that the damage it deals per minute is relatively low, which is why the target will often receive reinforcements before you manage to destroy him.

The development of the VK 30.01 (D) requires a lot of patience. You need to decide whether you prefer to increase your mobility, or to receive greater firepower. I would recommend that you decide on the latter and develop a new suspension, new turret with the 7.5cm KwK 42 L/70 cannon to follow - this will allow you to attack the enemy from the front side and operate in the second line. Now you can unlock new driving units, which will allow you to move around the map and operate as a flanking support tank. 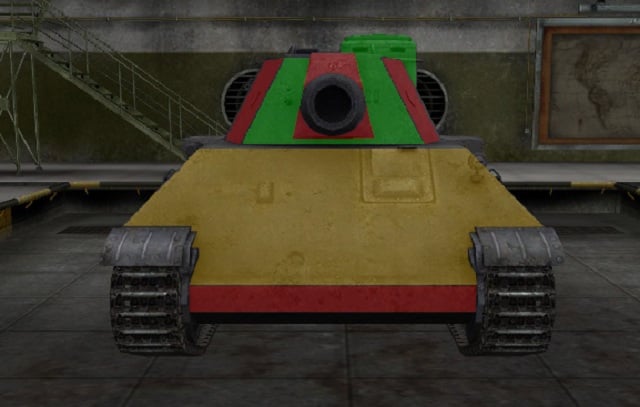 The hull's armament in the VK 30.01 (D) is similar to the one in the Pz.Kpfw.III/IV. The glacis plate protects you from tier IV vehicles' fire. The side armor was weakened, which is why you should never rely on it. The rear is a bit thicker, but still insufficient. You need to watch out for the lower-front (flat) part of the glacis plate - with the thickness of 100 mm, it is capable of making shells ricochet off it.

The turret in the VK 30.01 (D) is quite resistant to front-side fire. Thanks to the fact that it is narrow, many of the shells will ricochet off the side plates, which are inclined at considerable angle. The cannon's armor, although being thin, with the thickness of 80 mm, can also protect the vehicle from losing health points. The weakest point f the turret is its flat front plate, which can be pierced by, virtually, all tier IV vehicles.