KV-3 is another soviet KW series tank - this time we're dealing with first line vehicle, which is made for short range clashes. Despite a lower maximum speed this machine is more mobile than its predecessors due to the better engine. In addition the entire armor is thicker and new, more resistant turret can carry one of the strongest 7 tier cannons: 122 mm D-25T. A low accuracy of the gun combined with average mobility and very good armor and large amount of HP, create a tank that reigns in urban combat at short distances.

Newly purchased KV-3 has an access to the cannon developed for the previous machine - 107 mm ZiS-6, so it is worth to mount it right away. Next step is to research a new suspension and first engine: W-2IS. Thanks to that you'll be able to mount the turret and three more cannons available for this tank. Finally, I recommend developing and using the 122 mm cannon. Gun 100 mm D-10T is not bad, but it lacks fire power guaranteed by its stronger counterparts. 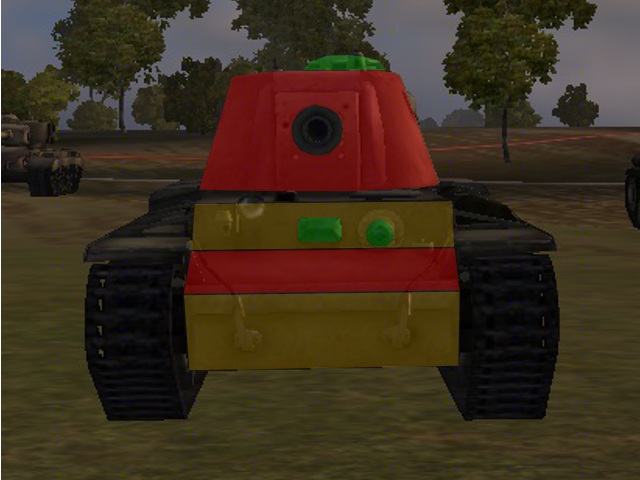 KV-3 is very resistant to damages - shells often easily rebound on its armor and some hits can return information about armor penetration despite no inflicted damage.

KV-2 hull looks like its counterparts in KV-1 and KV-2, but it is a bit longer. Attacking the tank from the front, we can aim at same weak points as its predecessors: driver sight and machine gun stand. But, unlike KV-1 and KV-2 I do not recommend attacking the top front plate around weak points - if the shell hits few cm higher or lower, it will ricochet. It is better to attack bottom front plate, which is bigger and easier target to hit. When attacking KV-3 from the side, we do the same as with its predecessors. The only difference is in additional 15 mm of armor, which should be no problem for 5 and higher tier tanks. In addition, penetration of the rear part of the hull damages the engine and set the tank on fire.

KV-3 turret is completely different story: despite theoretically low thickness of the armor it is very resistant to hits and is able to stand even cannons of 300 mm penetration. When we attack the tank from the front, we encounter a very thick cannon yoke (it "eats" our shots) and the proper armor behind it, set at the very high angle - our shots will almost ricochet on it. Sides of the KV-3 turret are relatively weakly armored, but its rounded shape allows for ricochets from time to time.