Continuing our tour over the American heavy tanks tree, we find the successor of T29 - T32. It is smaller than its predecessor but better armored, with less weak points and more HP. In addition it is slightly lighter than its predecessor, thus reaching maximum speed faster. T32 is one of the best balanced tanks in the game: it combines good armor with high mobility and solid (though not sufficient) cannon. For these reasons it is considered as one of best tanks in the game and is frequent choice in World of Tanks tournaments.

T32 is not much different tan T29 in gamestyle - it can perform same maneuvers and its hull down position is even safer than in its predecessor, due to better armored turret (both front and sides) and smaller hull. Front plate is upgraded, so this tank is very good in close combat, especially in frontal "hugging" to the enemy. Few tanks are able to defeat it in such position.

Because T32 uses modules, which were used with T29, we just have to research new suspension to mount them on the tank. Next step is developing new turret, because the basic one has only 114 mm of armor on the front and every opponent may penetrate it. After mounting new super-turret, we only have to collect experience for M103. 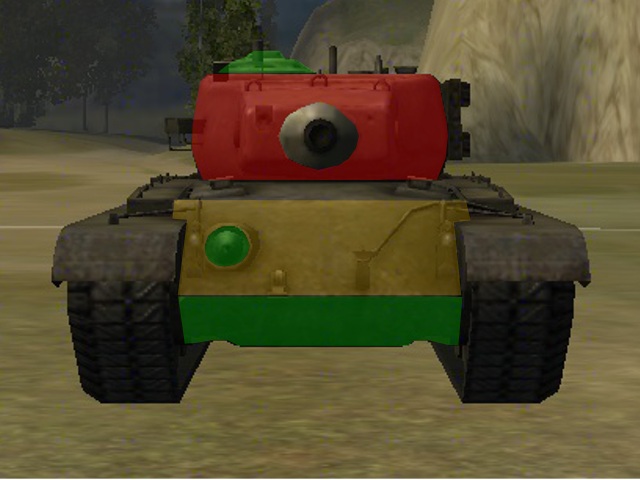 Like T29, T32 has quite weak hull and very resistant turret. Top front plate is a little better armored that at its predecessor and is set at higher angle, thus after setting the tank at slight angle, many shots can ricochet on it. The safest way is to aim at the machine gun stand or bottom front plate. The turret is indestructible from the front - only strongest cannons in the game have any chances to penetrate it and this doesn't happen often. Sides and rear of the turret are also heavily armored, but in this case high caliber cannons can damage it. If T32 "hugs" us, we are practically lost. The only option is to shot at commander's cupola (but it is very hard to aim it) or changing to HE shells and aiming at the cannon. In the second case we will have to wait for support of our team, so our colleagues can destroy the opponent.

Sides and rear of the hull are weakly armored and easy to break through. Ammo rack is located under the turret and the engine is located in the rear part of the tank.