T29 is the first heavy tank with features characteristic for American machines: relatively weak hull and indestructible turret, which can rebound even shells shot from Maus or Is-7. This tank, often considered as the best 7 tier vehicle, has well-balanced parameters such as mobility, maximum speed, durability and firepower. This is one of the best machines to keep the front line, especially if it is possible to set it in the hull down position (more information can be found in Advanced tips). In this position the tank can stop an attack of stronger machines with no problem. During the attack T29 is doing a bit worse, but still it is opponent who can't be underestimated: many tankers have lost a clash with the American machine in the close combat, because they made facehug possible. After mounting 105 mm T5E1 cannon this tank is able to damage any vehicle available in the game.

If we have used this guide while playing M6 tank, we should already have 90 mm M3 cannon - just mount it on the tank. Although, if we do not have it yet, it is first and most important module to research. After that we should develop new suspension and 105 mm T5E1 cannon. After mounting the gun we finish collecting experience points for the turret (it adds 100 HP and increases view range), develop both engines and finally a radio. Only when we have fully functional tank, we start the path leading to T32. 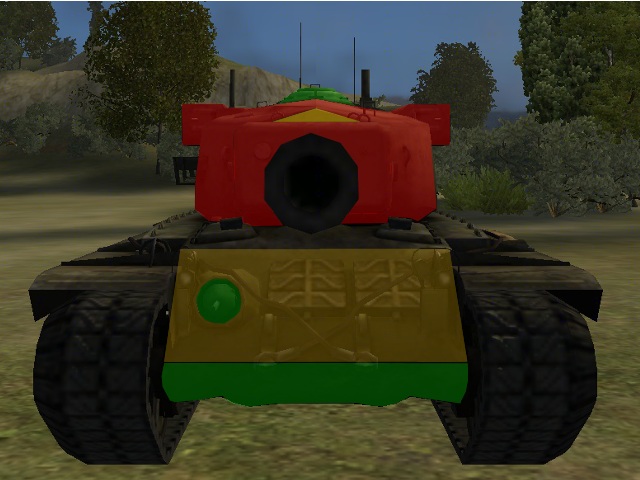 A characteristic feature of T29 is medium armored hull and very resistant turret, so when we fight against it, we have to now, where to aim to destroy it. Despite of 102 mm of thickness, top front plate, especially after setting the tank at slight angle, can rebound even shells with 140 mm of penetration. Thus it is best to aim at machine gun stand or bottom front plate. If we have cannon of 160 mm penetration or more, just aim at the front of the hull - most of shots should inflict damage. Unfortunately, a good driver of T29 knows which elements of his machine are weaker, so he will often search for hull down position or try to frontally "hug" our machine. In such cases we have to attack the turret, and this is not a simple task.

Shots at front of the turret have no effect - 279 mm of armor effectively protects it against penetration. However this tank has two weak points, which can be used against it. First of them is commander's cupola and this is our main target, if we attack the turret - most of shot should penetrate it. Another target is triangular piece of armor just above the cannon's yoke - in this case we have to have at least 200 mm penetration cannon, but this is better option that attacking indestructible front armor. Sides and rear of the turret are not very resistant to shots, so we can also aim them. Hits at the "ears" do not any harm to the tank.

In addition to above, T29 has same weak points as rest of the tanks in the game - sides and rear. By aiming below the tower we are able to hit ammo rack and shots at the rear of the hull can set this vehicle on fire.