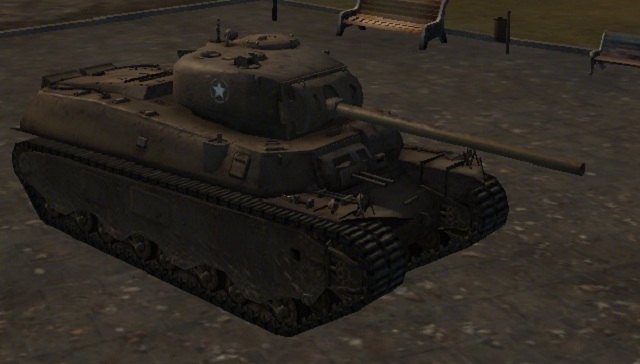 Heavy tank M6 is an older brother of T1 heavy. The parameters of both vehicles are almost identical: side and rear armor, turret, maximum speed and engine are inherited from the 5 tier machine. Unlike the T1 heavy, M6 has tougher front armor, more HP and what's most important, an access to excellent 90 mm M3 cannon. Even if we take into account that this tank does not encounter enemies which are one tier higher than its predecessor, game style remains unchanged. We still try to flank the enemy and use our mobility and take frontal battles only as a last resort. Thanks to better accuracy of 90 mm M3 cannon we are able to attack targets from longer distance.

Since part of modules is taken from T1 heavy, we can mount them right after buying the tank. These are: Wright G200 M781C9GC1 module, SCR 538 radio and 76 mm M1A1 cannon. The next step is to research 76 mm M1A2 cannon or new suspension. We end tank development with researching the turret, 90 mm M3 cannon (we'll need it for the next tier machine) and heavy tank T29.

Weak points of M6 are identical as with T1 heavy. Vehicles of 6 tier should have no problems with penetrating its front armor. When M6 is set at the angle, we can increases chances to break through by shooting at lower part of front armor. If we still have problems with penetration, we can attack from the flank - both, sides and the rear are same as in T1 heavy and we can penetrate them with any available gun.