Discussion on more advanced tactics should be started with presenting weak points on the enemy armor, the general positions of modules inside the tank and methods of eliminating enemies from the battle.

None of tanks available in the game is homogeneous body of steel. Depending on the section we shoot at, the armor thickness can vary in a large range. For example the front plate of KV-4 tank has given thickness of 180 mm, but in practice there are some places on it, which can be break though with cannon of 120 mm penetration, such as machine gun stand and driver's sight. Basically all tanks available in the game share some weak points. These are: bottom front plate, side armor between tracks, rear armor, commander's cupola and rear of the turret. There are exceptions from this rule, but in most cases a shot in such places, even against higher tier vehicles, should guarantee penetration.

Another important information is location of modules inside the vehicles. Unfortunately, in this case practically almost each tank has different distribution of the equipment inside the hull. Only common and most important elements are: cannon, engine and ammo rack. The cannon is easiest to find and doesn't require any further comments. Just hit it with HE shells and sooner or later it will be damaged, thus reducing enemy accuracy or eliminating him from shoot-out - this is an effective method of getting rid of tanks, which we are not able to damage in any other way. The engine is usually located at the rear, therefore by flanking the enemy we might try to shoot at its rear, increasing our chances to set the enemy on fire. In case of German tanks we also could try to shoot the bottom front plate, hoping for the same effect. The last important module is ammo rack. As we know from previous chapter, damaging it increases cannon reload time and destroying it results in spectacular explosion of the enemy. The ammo rack is usually located under the tank turret or (in case of Soviet vehicles) also in its rear part. If we're armed with large-caliber cannon, we should aim at these points and hope for destroying the enemy with one shot.

The last element which is common for all machines are tracks. We should master the art of damaging them, because in many cases the immobilized tank equals destroyed tank. The surest way to stop the enemy is to fire at frontal or rear drive wheel/idler. Unfortunately they are not always visible - in that case we have to shoot tracks from the front, but it often happens that the shell hits and doesn't do any damage. Indeed, this is one of tactics used by Soviet and American commanders. Since the tracks hit doesn't influence tank's HP, placing the vehicle at slight angle to the enemy makes at least some shots harmless. Same tactics can be used in case of German tanks, but it is more risky. Due to high sides, which can be damaged, we must choose wisely the angle at which we set our tank towards the enemy. 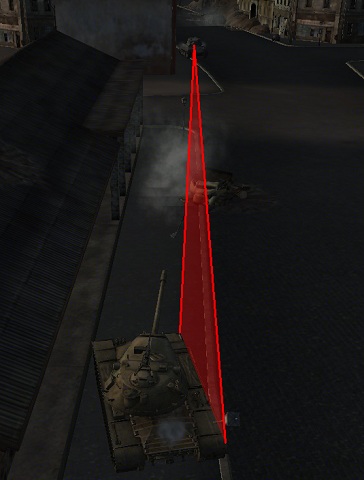 The opponent facing the tank set at the angle - he can choose whether shoot at the front (in this case more durable) or tracks. At this setting tracks of M103 are not penetrable.

An extension of this tactics is the method of leaning out from behind buildings or ruins. Most of beginners move perpendicular to the opponent, getting shot in the front wheel, thus losing HP and risking breaking the tracks and another series of attacks at the exposed fragment. Proper attack from behind the building should be carried out diagonally with front plate set at the high angle to opponent. Thanks to that, there is a high chance that first enemy shots will ricochet on our armor, making the counterattack possible. After that we should retreat behind the cover. Third method is to set our tank with its side at very high angle, accord to the rule described in previous paragraph. All we risk then is to get hit at tracks and immobilization, but subsequent shots should not cause any harm.

One incorrect and two correct methods of leaning out from behind the corner of the building.

Another maneuver very popular among some (especially American) commanders is so called hull down position. We set the tank behind terrain obstacle or a wreckage in the way that only turret is visible. Because American tanks such T29 or T32 have quite vulnerable hulls and almost indestructible turret, it is natural to attempt using all advantages, while hiding flaws. A tank set in such position is one of the toughest enemies do eliminate, because as opposed to the vehicle hidden behind the building's corner, it is able to keep observing the field and carry out the shoot-out. One of methods to deal with such opponent, available only in close range, is to shoot at vulnerable turret points. Hitting commander's cupola or weaker armored points on the front can inflict enough damage to destroy the enemy or force him to retreat. At longer distance the fight with such opponent is more difficult, if not impossible. We can try to use HE shells, but due to small amount of damage inflicted and limited amount of shells we can have, usually the better idea is to find another way around and try to flank the enemy. As a last resort, if we outnumber opponents, we can try to ride over the battlefield and fight on the close range. 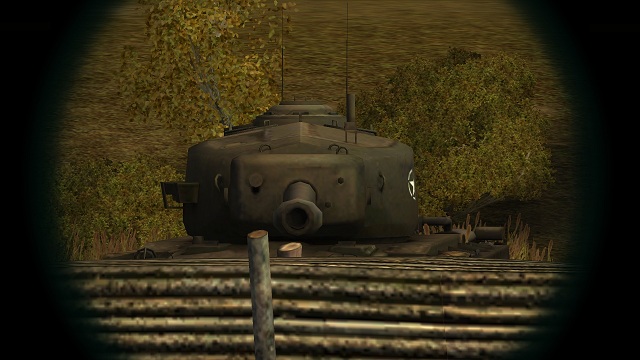 Favorite American tankers maneuver. In this case, the best way is to find another way to attack.

The last type of maneuvers popular among tankers is so-called "hugging": facehug or sidehug. Frontal contact of two tanks in most cases turns into shooting duel: this player who is able to better penetrate enemy turret - wins. One of the best vehicles for such clashes is American heavy tanks, Soviet IS series heavy tanks and German E-75. During these duels both sides try to penetrate weak points on enemy tanks, which can be avoided by rapid turnover of the hull and turret. Soviet tanks, thanks to their low profile, can be easily hit at the commander's cupola. On the other hand IS-3 or IS-8 can use their small size and after sudden withdrawal, fire at the front plate of the enemy.

Cases of sidehug are much less common, but effective against some vehicles. For example German super heavy tank Maus is very vulnerable for such type of maneuver carried out by low medium tanks like T-54. Due to highly mounted turret, it is not able to hit its opponent and thereby it can be easily destroyed. 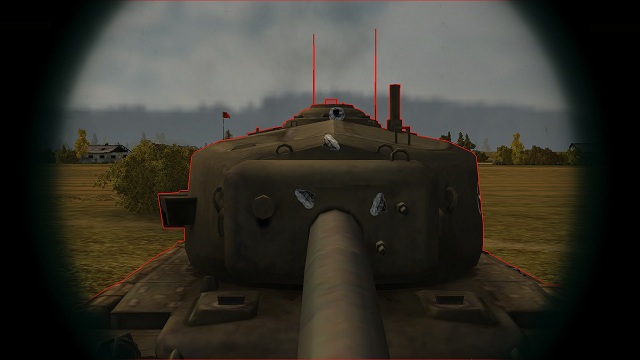 American tanks are simply designed to hug the enemy: their only weak point is the commander's cupola.
See/Add Comments
JOIN FOR UPDATES