Self-propelled guns, commonly called artillery, allow you to fire at enemy while being hidden far behind front line. In most cases drawing makes only few of these vehicles available on the battlefield, but it must be taken into account that even just one machine can completely change the battle result. 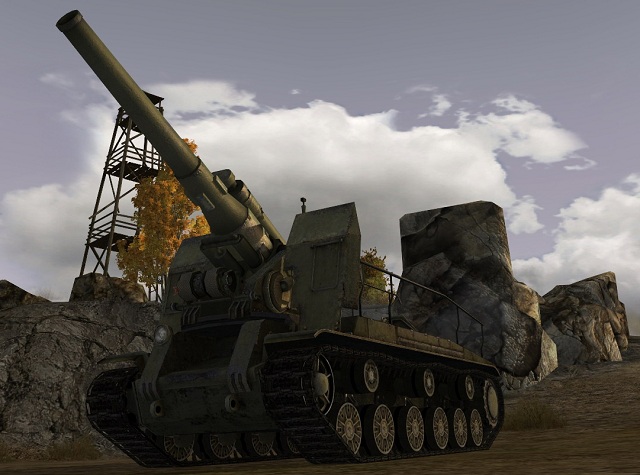 Russian S-51 is looking for its next target. This vehicle does not have to hit the target: the explosion of a projectile is able to destroy some of the lighter machines.

The first and most important feature of artillery is the ability to fire over allies, hitting enemies hidden away behind hills or ruins. In order to fire such shot just activate sniper mode (SHIFT key by default), so we will see entire battlefield in bird's-eye view. This mode (also called Strategic View Mode) allows us to shoot at enemy wherever he is placed on the battlefield. In addition we get a new indicator that makes aiming easier - this is a line from our tank to the middle of the sight. Depending on its current color, we will know when our shot is blocked (red) or when we're able to directly hit the enemy (green). It is also worth to remember yet another relationship: the sight changes its shape along with increasing distance from the target. If it is elongated, it means that opponent is pretty close and we have the best chance to hit him. Round sight means that we're almost out of range and shells can fall down on both sides of enemy vehicle and flattened sight symbolizes maximum range for our fire. For this reason, despite the possibility of covering the entire battlefield from the starting place, it is good to change our position from time to time, to increase our chances to hit.

Artillery sight shape depending on the distance: short, medium, maximum range. The last photo shows the effect of terrain obstacles on the accuracy of fire.

There are several important tasks for self-propelled guns during the battle. First of all, they must focus on damaging or destroying hardest armored enemy tanks. Even best defended position can be taken after softening it with artillery fire. On the other hand, a massive defensive fire of self-propelled guns is able to break down any offensive and force attackers to retreat. Another equally important task is to destroy enemy artillery positions. There are two ways to do it. First and easiest one is to follow our scout and attack detected self-propelled guns. Unfortunately not always our light tank is able to get to enemy rear lines. Then we have to use more difficult method called counter-artillery/counter-arty. In this case we have to excellently know the current map and where the enemy artillery usually is placed. Then we activate sniper mode, point the sight on the area where enemy artillery resides and ... wait. When we see the enemy shell trace, we point the sight to its end and fire. With any luck after few second we will get confirmation of hitting enemy vehicle and see burning wreckage. But we have to remember that the enemy will also hunt for our artillery. There is one fairy simple method to avoid counter-fire: right after starting shooting we have to move few meters forwards or backwards, because undetected and mobile artillery is very difficult target to hit. 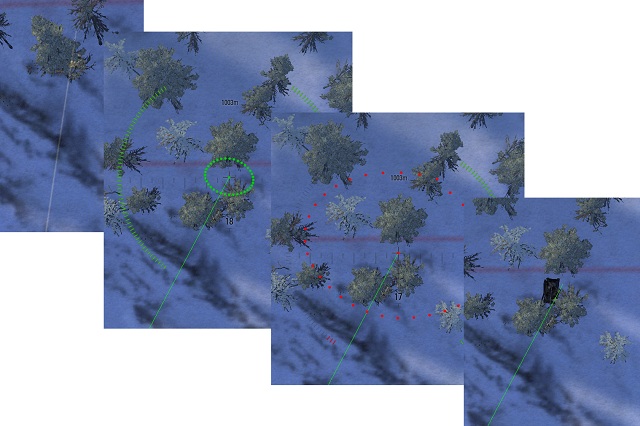 A brief pictorial history of counter-artillery: after detecting enemy shell trace, we fire at him caliber 155 mm gift. The moral of this is: always change your position after firing.

Self-propelled guns are most important vehicles in the team, thus protecting them and detecting and destroying enemy artillery positions should be a priority in every battle. Most players believe that playing as artillery is not fair or is very simple - but they could not be more wrong. Using artillery is quite safe, because mostly the entire team protects us, but the difference between beginner and experienced commander is colossal. Beginners usually select the easiest targets to destroy and despite earning several kills they lose battles. Experienced tankers aim not at easiest targets, but at most valuable ones: damaging PzKpfw VI Tiger tank is more important than destroying PzKpfw IV for example. Unfortunately, it is impossible to predict every situation which can happen during the game, thus it is impossible to create a list of vehicles to be destroyed in proper order. At this point I can give only general tip: always destroy enemy artillery first, after that - tank destroyers and later on - heavy, medium and light tanks.