If playing the games, you prefer to be a sniper, lurking for your enemy in bushes, then tank destroyers are perfect for you. With disadvantage of less hit points that other tanks of the same tier, these machines get the access to the most powerful cannons in the game and (mostly) have best camouflage factor, allowing them firing from hiding.

Hidden Ferdinand and Jagdpanther are waiting for targets. Firepower of both vehicles can damage and even destroy some of heavy tanks.

Tank destroyers, as the name indicates, are primarily used for rapid destroying of armored targets. However, in this case, we have to remember one important thing: they are not first line tanks. Even if they have very thick front armor, these vehicles should fight at long distance, because at the short distance they can be easily flanked and destroyed. In addition, detected tank destroyed always becomes a tempting target for enemy artillery, so therefore we have to look for sheltered location, away from the front lines. Once we find a good position, there is nothing else but activating the sniper mode and waiting for an enemy.

Tank destroyers are the foundation of a good defense. Set 400-500 meters behind the main front line, they are almost impossible to detect, and in the same time they can hold enemy at bay, stopping every opponent, courage enough to get closer. Thanks to large caliber of installed cannons, several destroyers working together can even destroy one heavy tank in one shot. As the tactics of commanding such vehicles is quite simple and gives tangible results, the question remains: how to fight against them? There are several methods to destroy tank destroyer. One of them is effective reconnaissance connected with shelling detected vehicles. Due to the weak top armor, most tank destroyers can be turned into a flaming wreck with only one good hit. Another method is to flank enemy positions. Apart from few exceptions, most of tank destroyers have cannon mounted in the hull, so it is just enough to place our medium tank at destroyer's side and we can shoot it with impunity. The third and the most risky method is a frontal attack. In this case it is best to fight at a short distance, making sure that tank destroyer doesn't hide from our shots. Most important thing is to attack as soon as we reload. Playing "shot for shot" will probably end in out defeat. 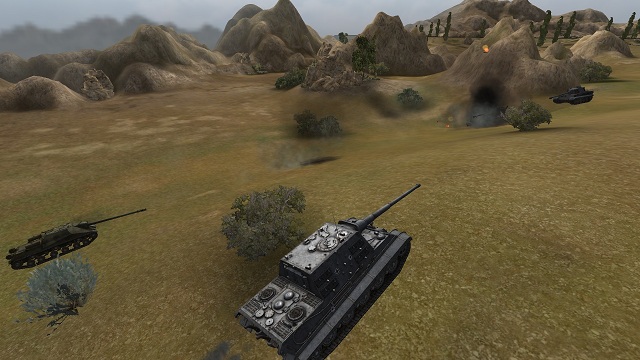 Well positioned tank destroyers can completely block the flank. One of opponent's vehicles has discovered it right now.
See/Add Comments
JOIN FOR UPDATES