Target at range, aim, fire! Penetration! But now it would be good to know what damage we can cause to the enemy with our shells.

Same as with the armor penetration, damage inflicted by our gun is averaged - actual values vary from 75% to 125% (exact range can be read by clicking RMB on our tank's ammo in the garage). Damage which can be inflicted depend both on the shell type we're using (armor piercing AP, subcaliber APCR, cumulative HEAT or high explosive HE) as well as on the area where we hit enemy tank.

Inflicted damage can be divided in two types: hull damage, which reduces hit points if the vehicle and "inside" damage of the crew and modules. If you use AP, APCR or HEAT shells, then penetration of enemy hull armor will reduce vehicle hit points with the listed damage +-25%. If we use HE shells and manage to penetrate enemy tank, damage is calculated identically as with other types of shells. But if the shell doesn't penetrate hull armor, we might still damage it seriously. In this case inflicted damage vary between 0 (small caliber HE shell hitting strongest armored part on enemy tank) and half of the gun's listed damage for that type of shells. In addition you should know, that explosion caused by HE shell will always try to "find" the weakest point at the enemy tank (in the range of the blast), so if you use it, it might be a good idea to aim at the top of the tank or sight. 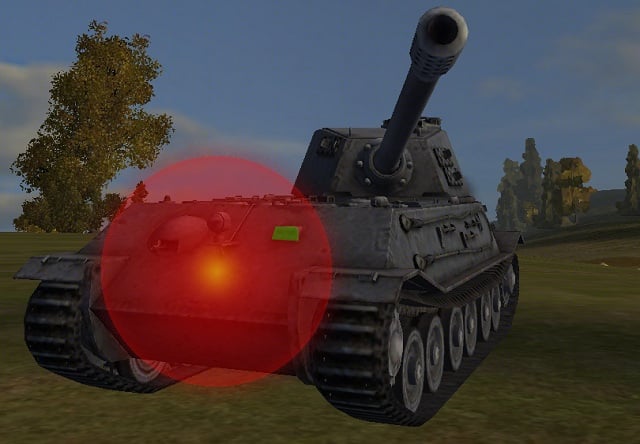 Despite the fact, that the shell hit the hardest enemy armor, the blast wave got inside the vehicle through driver's vision slit (marked in green).

Another type of possible inflicted damage is inside damage. All shells after penetrating the hull armor (or after explosion on its surface in case of HE shells), can injure the tank crew or destroy single modules as an engine or ammo rack. If the shell or the blast wave of HE shell hits the module, it not necessarily gets damaged. There exists so called "saving throw". Once it fails, the module get hit and eventually destroyed. The chances of damaging specific module are as follows:

A damaged module is represented in yellow, while destroyed one - in red. Damaged modules can be fixed up to 100% by using special consumables (i.e. repair kits) or up to 50% by the crew, automatically. Damaged modules affect the entire tank as follows: 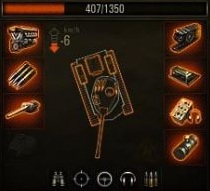 As for the crew, chances that each of tankers gets hit are 33% for AP, APCR and HEAT shells and 10% for HE shells. Unlike equipment, crew members can be only fully operative or knocked out.

In addition to destroying the tank by inflicting it sufficient damage points or by explosion of ammo rack, there is a third possibility: make the tank inoperable by knocking out all crew members. Once the tank loses its all tankers, it becomes inoperable even it has still hit points. Such vehicle is considered destroyed.