Each gun available in the game has its own accuracy (also called dispersion), given in meters over 100 meters distance. For example a gun with accuracy 0,35 m means, that most shells fired at the enemy, which is distant from us at 100 m, will land at 0,35 m from the middle of the sight.

How does it work in practice? During the game we're non-stop accompanied by a circle, which changes its size - this is dispersion of our gun. Its size is three times gun's accuracy, so in our example the dispersion's circle is 1,05 m. If we're standing still and shooting then each shell will land inside this circle with the majority of them landing close to its middle. Only several projectiles will end at the edge. 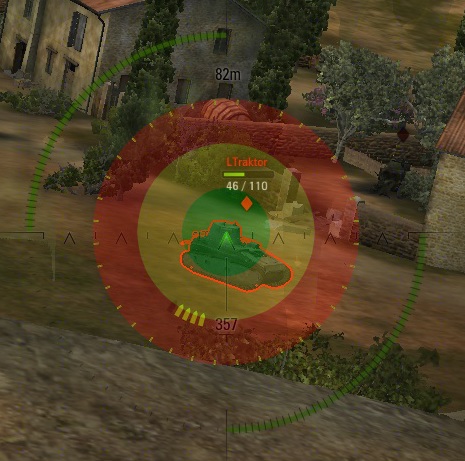 Unfortunately, we are not always able to fire with all aiming devices fully contracted. Wounded crew, damaged gun, turning the turret, moving the tank or even a shot fired recently - all these things have a negative impact on our accuracy. Fortunately, there are few skills and assets available for the crew, which reduce above penalties.

In addition to the accuracy, aim time is also important. A number given in the game indicated how many seconds we need to reduce the sight circle to 1/3 of its initial value. But this doesn't always guarantee an accurate shot: if we were moving recently or were turning the turret, the total time needed to aim the target can be higher than the value shown in the gun's description.

Gun's dispersion with the sight fully contracted (on the left) and while moving (on the right).
See/Add Comments
JOIN FOR UPDATES