Mechanics - why we can't break it through? Certainly you heard a tank commander shouting these words, while the shells were just ricocheting on the enemy armor, inflicting no damage at all. After this chapter you'll learn how to shoot in World of Tanks, how damage is calculated plus some additional useful info.

There are two methods of aiming at the enemy in World of Tanks: manual and automatic. Automatic aiming is activated by pressing RMB by default after pointing your sight at enemy tank. It is disabled by pressing E key. After enabling auto-aiming our tank will be following the enemy, aiming at its middle - just pull the trigger to shoot at the current position of enemy tank. Unfortunately auto-aiming has many disadvantages: it doesn't take into account opponent's movement, so shots fired at the moving enemy almost always miss. In addition it tracks the target as long as it is visible - even if it hides behind the terrain obstacle. For this reason it is worth seeing where your opponent really is, before you waste ammo by shooting at hills or ruins on the way. Thirdly, shells are often fired at the most heavily armored part of the enemy vehicle. Despite above flaws, auto-aiming is sometimes used in shooting at still, poorly armed targets at long distance or during the circular fight, when you're mostly focused on driving than on firing accurate shots.

The second and also most commonly used method is manual aiming. In theory, just point your mouse cursor at the target, wait until the turret turns in that direction and press LMB. But in practice, during shooting, we have to consider several parameters. Tank guns available in the game differ between each other in the muzzle velocity of fired projectiles and their trajectories. For this reasons we have to learn when to fire to hit the opponent. If you shoot at the still target, it is enough to aim the tank and fire - the shell will hit the enemy directly. Unfortunately, it is more difficult with the moving target: we will have to predict the direction in which it will move and shoot with the lead. At this point the projectile speed is very important. German guns 8,8 cm PaK 43 L/71 have very high muzzle velocity, so you just aim in front of the enemy to hit him. On the other hand, projectiles fired from howitzers, like 152mm M-10, are much slower and require more corrections due to the speed of the target. 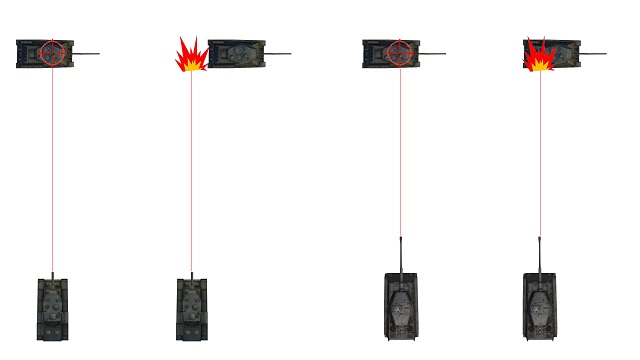 Shooting with the lead: 152mm howitzer (on the left) has to aim in front of the enemy, if it intends to hit the target.

Manual aiming can be supported by sniper mode. It is activated by appropriate key (SHIFT by default) and the mouse scroll is used to select one of three zoom levels. Thanks to the sniper mode we can easier hit enemies moving at long distances and aim at weak points of enemy's armor. But sniper mode has also its drawbacks - eyeshot is limited, so after each shot you might check your opponents' positions on the map or switch it off and look around the area.