Even though World War Z focuses on the story-related aspect of the game, in which four players complete various missions, the game still gives access to various PvP modes. There are several modes to choose from, in which the players can use character classes different from those limited to the story mode. In this chapter you will find information about the available PvP modes - information about the available classes can be found in the next chapter. 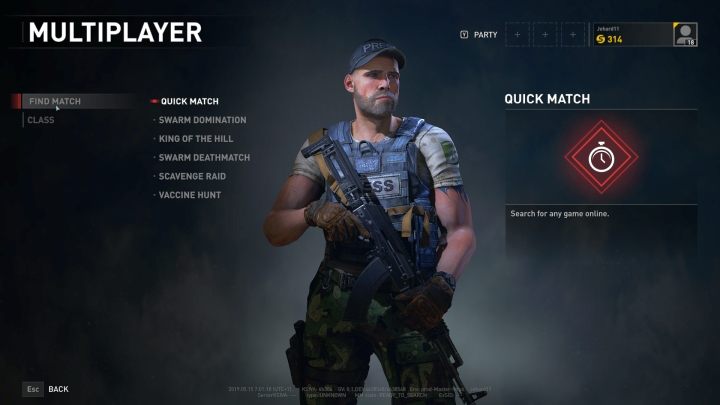 Accessing the PvP mode is simple - you need to go to "Multiplayer" and then select "Find Match" option. From there you will be able to select one of the available game modes - or use the automatic matchmaking option for the game to select it randomly - as well as pick and customize your character class.

The Quick Match is the first option you can select after choosing entering the Multiplayer screen. This is basically an automatic matchmaking system - the game will pick a game mode randomly - from the available game modes - and find players willing to play with you. This is a perfect choice for those that do not have a preference for a specific game mode and do not want to wait - a game will be found in just a few seconds.

The Swarm Domination is a variation of the popular domination mode, which can be found, for instance, in the Battlefield series or in the recently released Tom Clancy's The Division 2 (albeit under different name). In this mode the teams have to capture and hold control zones in order to earn points.

The team with the most points at the end of the time limit will win the entire match. A thing worth mentioning is the fact that the area will be swarmed with zombies. The zombies will appear on the control zones - if enough of them will stand on a control zone before they are eliminated, the control points will become neutral and the team will need to clear it off the undead and capture it again.

King of the Hill

This mode is very similar to the Swarm Domination - the only difference is the fact that there is only one control point to capture and hold. The team controlling the point will gain victory points for every second - the one to score higher at the end of the match will win. In this mode the zombies will also appear in swarms and will try to push the controlling team off the control point.

The Swarm Deathmatch is the variation of the team deathmatch mode which can be found in other games, such as the Call of Duty or Quake franchises. Two teams will compete against each other in order to gain as many kills as possible - the team with more kills at the end of the match will win.

Zombies also appear in this mode - they will appear in small numbers and from time to time a zombie swarm will appear, rushing towards the location marked on the screen.

In the Scavenge Raid mode the teams will have to collect resources scattered around the map or collect them from fallen enemies to acquire victory points. As always, the team to collect the most will win the entire match and zombies will wander around the map as the "third team".

The Vaccine Hunt mode is a variation of the capture the flag that can be found in other titles. Both teams need to find, acquire and hold onto a vaccine in order to acquire victory points. The team with the most points at the end of the time limit will win the entire match.

To sum up, we present a list of tips that might come in handy when playing any of the PvP modes: