The Exterminator in World War Z is the crowd control specialist of the team. The character of this class will focus on dealing with zombies using Molotov Cocktails and/or Claymores, as well as fully automatic weapons. The class also offers various bonuses to the entire party, increasing the effectiveness of defenses and the resistance of party members against fire and explosives. In this chapter you will learn more about the Exterminator class in World War Z. 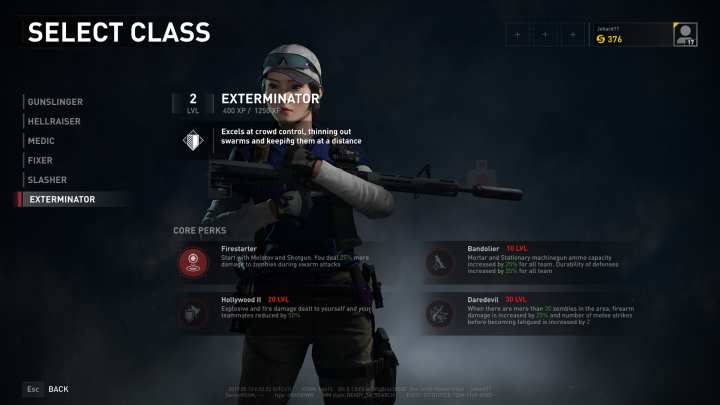 The Exterminator is the crowd control specialist of the team in World War Z.

The Exterminator class is the crowd control specialist of the team, somewhat similar to the Hellraiser in the case of used equipment, but focusing not on obliterating foes but rather on limiting their movement. The core part of the class is the Molotov Cocktail - a well-known improvised explosive, capable of setting dozens of enemies on fire, preventing them from moving and killing them after a short time. The Exterminator, similarly to the mentioned Hellraiser, also has access to the Claymore mines. The class is extremely effective when dealing with the Bull - a well-targeted Molotov will set the special zombie on fire, disabling it from combat for several seconds, allowing the team to quickly eliminate the threat. The perks of the Exterminator increase the effectiveness of both the Molotovs and Claymores, increase the resistances of the character and the team against fire and explosive damage and even allow the character to boost defenses.

The class starts with a Molotov Cocktail and a Shotgun. Additionally, the class shines when dealing with a zombie swarm - all of the damage done by the Exterminator is increased by 25% when the zombie swarm appears and with the proper perk (Daredevil) this can be further enhanced.

The Core Perks of the class are: Firestarter, Bandolier, Hollywood II and Daredevil. The descriptions of all of them can be found in the further part of this chapter.

The Exterminator, like other character classes in World War Z, has access to 31 different perks. All of the perks were presented in the following table.

To sum up, we present a list of hints that will make playing the Exterminator character class easier and more effective: