The Slasher in World War Z is the frontline character. The character focuses on dealing with the zombies using melee attacks, with perks increasing the damage done and at the same time decreasing the damage taken from enemies when fighting in close quarters. This class also provides benefits to the entire team, increasing allies' effectiveness in melee combat. In this chapter you will learn more about the Slasher class in World War Z. 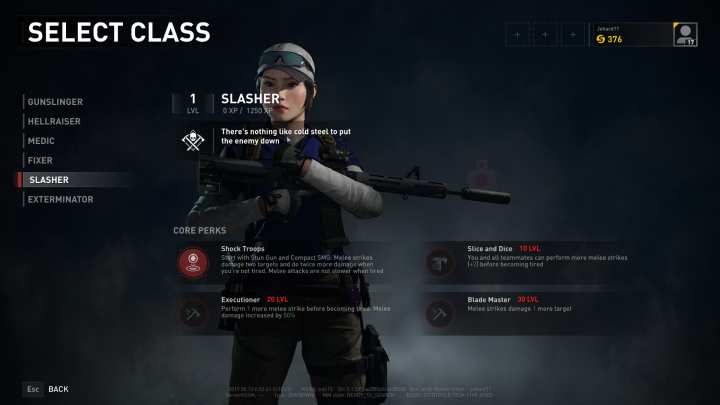 The Slasher is the melee specialist of World War Z.

The Slasher is the melee specialist in World War Z - majority of the class' skills focus around increasing the effectiveness of the character when fighting in melee, using the machete. The perks increase both the damage done via those attacks, as well as the number of attacks that can be performed before the character gets tired. What is more, the class gains a huge, 50% damage reduction and 90% friendly fire damage when fighting in melee range, allowing the class to stay in the middle of the enemies, even on higher difficulty levels. The class deals immense damage with melee strikes - with proper upgrades, even the Bull will be downed in just a few hits, before he can do anything. Additionally, the class offers bonuses to melee attacks to the entire party, allowing allies to perform more melee attacks before they get tired.

The class starts with a Stun Gun and a Compact SMG. The Stun Gun shoots electrodes, capable of stunning and killing over a dozen of enemies in one hit. The tool can be further enhanced with perks, turning it into a deadly weapon. What is more, when fighting in melee the class can hit two enemies at once, deals double damage when the character is not tired and getting tired does not make melee attacks slower.

The Core Perks of the class are: Shock Trooper, Slice and Dice, Executioner and Blade Master. The descriptions of all of them can be found in the further part of this chapter.

The Slasher, like other character classes in World War Z, has access to 31 different perks. All of the perks were presented in the following table.

To sum up, we present a list of hints that will make playing the Slasher character class easier and more effective: