The Hellraiser character class in World War Z is the demolition man of the game, focusing on using explosives to eliminate enemies. This class offers a mix between defensive and offensive capabilities, giving players access to skills increasing the effectiveness of his own abilities and offering a nice boost to the entire party at the same time. In this chapter you will learn more about the Hellraiser class in World War Z. 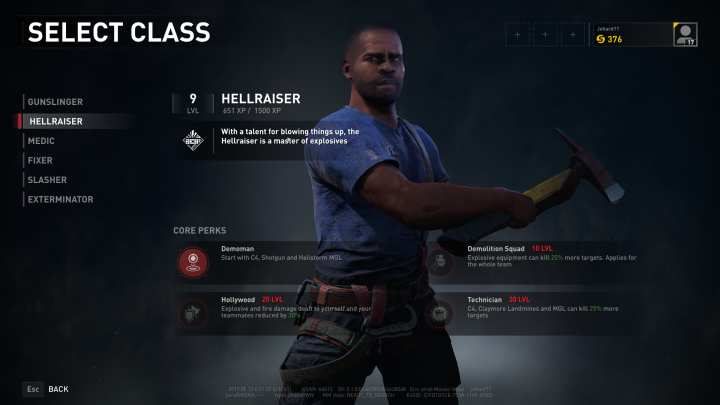 The Hellraiser is an explosive specialist, effective against clusters of foes.

The Hellraiser class is the explosives specialist - a large portion of the class' perks increase the effectiveness of explosive weaponry and gives access to more types of those tools, offering some very powerful boosts to the entire team as well. As you progress in the Hellraiser skill tree, you will be able to increase the effectiveness of explosives - allowing them to blow up more targets at the same time, ignite the area after the explosion or give a chance to plant Claymores at no cost to equipment, as well as and unlock various weapons for short-ranged combat, namely shotguns.

The class starts with C4 charges, a Shotgun and a Hailstorm MGL. The Hellraiser is the only class in the game capable of starting at level 1 with a heavy weapon (Hailstorm MGL) in their inventory. It is also one of the two classes - along with the Fixer - to be able to start with a Breaching Charge.

The Core Perks of the class are: Demoman, Demolition Squad, Hollywood and Technician. The descriptions of all of them can be found in the further part of this chapter.

The Hellraiser, like other character classes in World War Z, has access to 31 different perks. All of the perks were presented in the following table.

To sum up, we present a list of hints that will make playing the Hellraiser character class easier and more effective: