The Gunslinger character class in World War Z is the class focused around increasing the overall effectiveness of weapons, grenades and damage dealt by the class, as well as the entire team. This makes it a good choice for beginners, as it is easy to understand and relatively quick to master. In this chapter you will learn more about the Gunslinger class in World War Z. 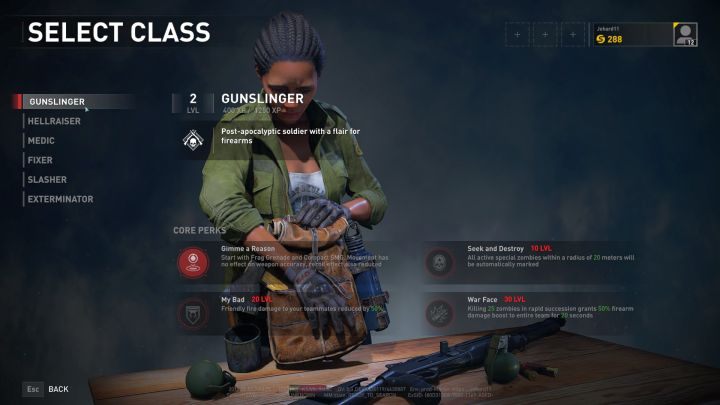 The Gunslinger is a firearms specialist, but also a valuable support class.

The Gunslinger class is basically a firearms specialist - a large portion of its perks increase the effectiveness of weapons the class uses, along with some enhancements to grenades and overall character effectiveness. As you progress in the Gunslinger class, you will be able to decrease the effects of friendly fire in the entire team, increase the reload speed (and give special abilities related to the mechanic) and increase ammo capacity and damage of weapons. The final perk of the class, War Face, offers a huge boost to damage for the entire party.

The class starts with Frag Grenades and Compact SMG. The special ability of the class is the fact that movement has no effect on accuracy of the weapons (you can shoot while moving) and the recoil of weapons is greatly reduced.

The Gunslinger, like other character classes in World War Z, has access to 31 different perks. All of the perks were presented in the following table.

To sum up, we present a list of hints that will make playing a Gunslinger character class easier and more effective: