On this page of our guide to Wolfenstein: Youngblood you will find a detailed description of Raid Mission: Brother 2. This is a long and difficult main task, during which the logistics and transport center is infiltrated. Sisters must reach the top of the tower where the Bruder 2 Ubergarde boss has to be defeated. 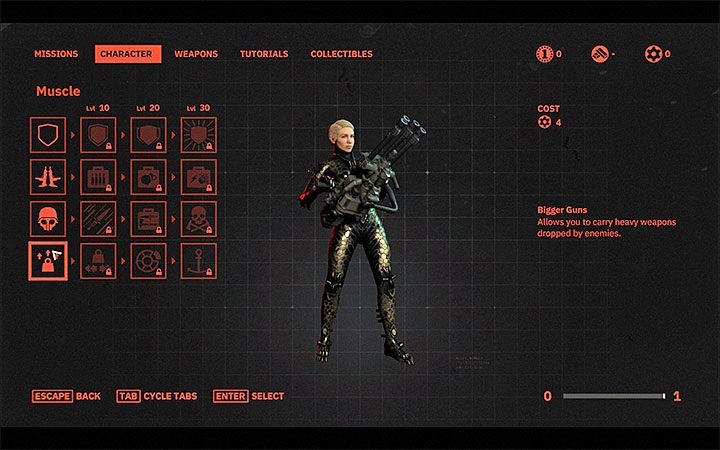 Before you take care of this difficult main mission (raid) we recommend taking care of three things:

How to get to the Brother 2 district? 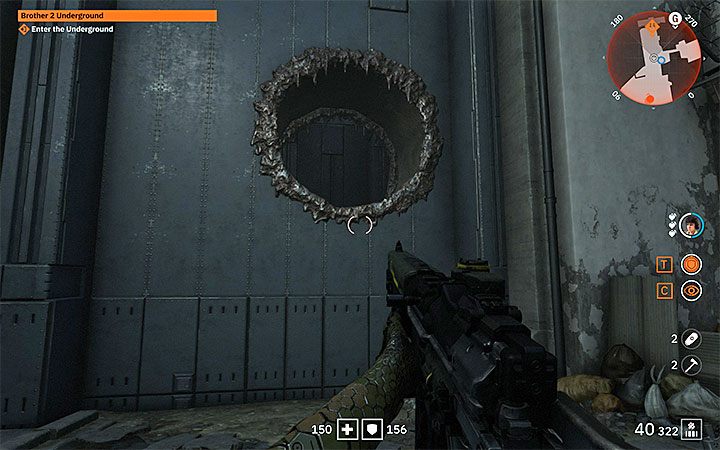 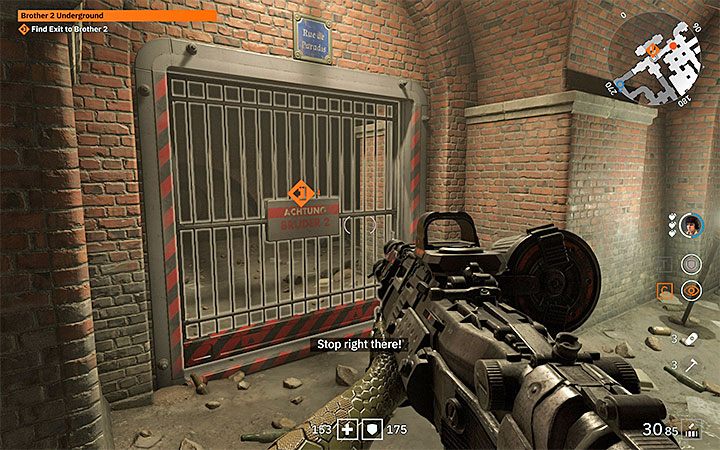 Brother 2 is one of the areas of Paris that is initially inaccessible. Brother 2 district is next to the Political Detention Area 4. The two locations are separated by a huge gateway, which makes it impossible to move through them. The solution to the problem is to reach the Brother 2 district by underground. In order to execute this plan, you must take care of the following two side tasks. Each of them is described on separate pages of the guide:

The entrance to the canals is next to the bus with laser gun and it is a hole in the wall of picture 1. The entrance to Brother 2 is at the very end of the underground and is shown in picture 2.

Crossing through the lowest levels 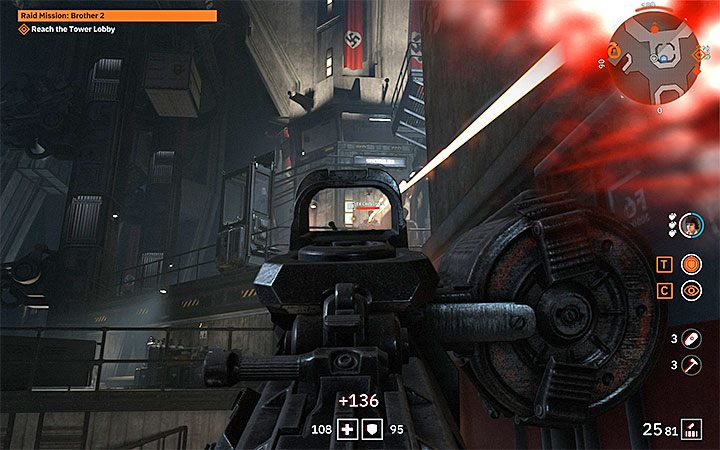 You start at the lower levels of Brother 2. There are multi-level structures and the whole building is surrounded by water. Avoid jumping into the water as much as possible, as you will not be able to continue your attacks and if you need to (quickly) reach a ladder or a lower shelf.

There are many enemies in Brother 2's basement. Pay special attention to Supersoldats and drones, which are worth destroying as soon as they appear. 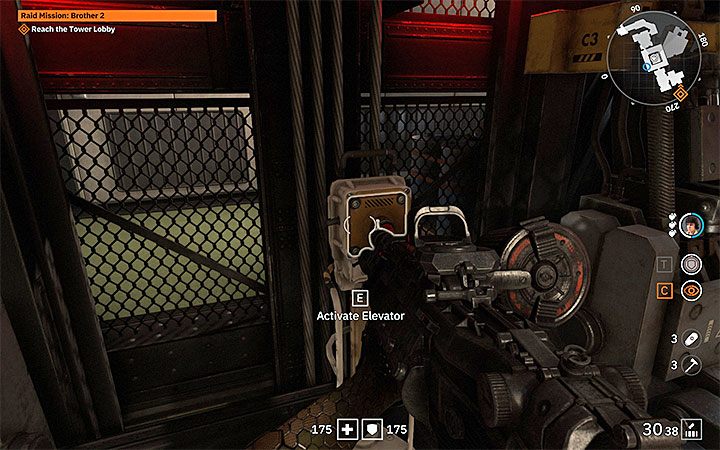 When climbing, check for balconies and stairs that will take you to higher levels. You can also jump into more distant platforms with double jumps, but be careful not to misdirect the jump and fall down (or even worse - fall into the water).

Ultimately, you must reach a large vertical shaft. Here you can press the button and operate the lift or simply use the stairs surrounding the elevator shaft. When you reach the top, destroy a new padlock and then reach the yellow gate - it can be lifted thanks to the cooperation of the sisters.

To get to the lobby of the Tower 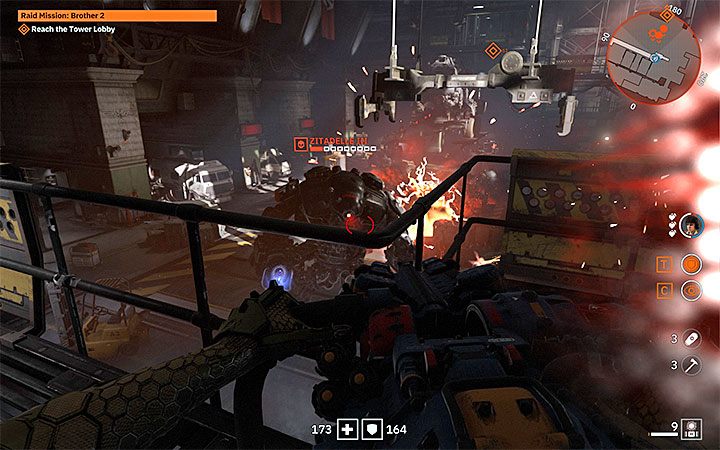 Another location is a huge garage. You start at its upper level and can make (double) jumps to other high elements, or go down and start sneaking. Also, you can start direct battle with enemies. If you are going to avoid detection, travel to the edge of the garage or find holes in the floor leading to small shafts.

The garage is patrolled by Zitadelle mini-boss. Fighting this huge machine is not mandatory and can be avoided. In the case of battle, aim for the shoulders of the boss, but also its weapons. Remember to use weapons that weaken horizontal armor rectangles. If necessary, hide behind large obstacles or retreat to the top. 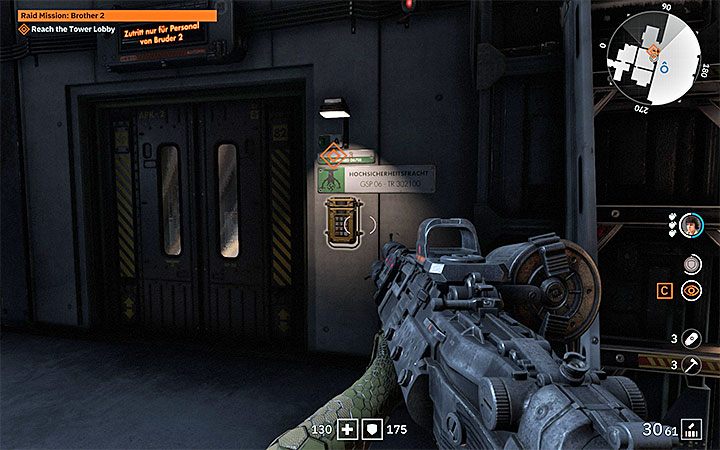 Ultimately, you need to get to the opposite end of the garage and walk up the stairs to the top. There's a new yellow gate to raise. The next location is a big hall, but you shouldn't meet any heavy opponents.

You must locate the exit shown in the picture, next to which there is a keyboard to enter the code. The first sister must set herself up at the keyboard and the second sister must reach the code generator located next to it. In our case, the correct combination was 5231. 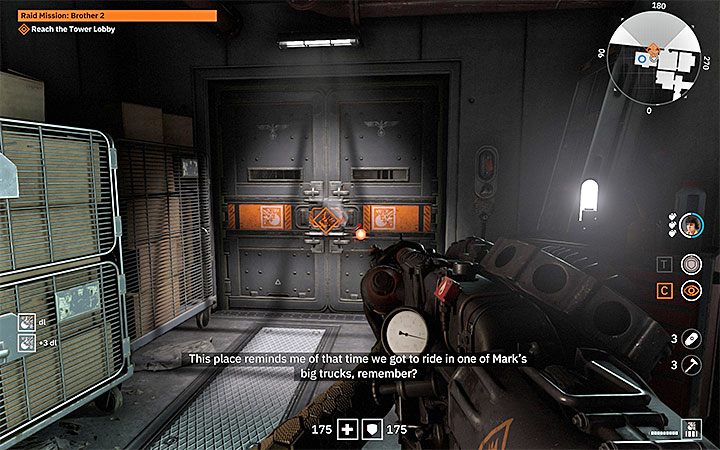 In the new room you will find the heavy weapon Dieselkraftwerk. You need to immediately use it to destroy the nearby door - press the attack button to send a self-adhesive grenade towards the door and press the aiming button to blow it up. 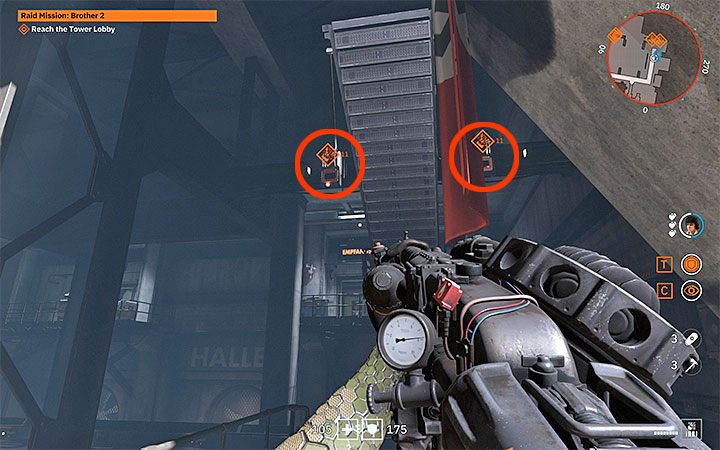 In the new location you will have to fight against Supersoldatas. More important is the puzzle and the Dieselkraftwerk weapon is once again needed to solve it. Get interested in one of the two raised bridges. Stand below the bridge and throw the limpet grenades towards the two side hooks - we've marked them on our picture. Detonate the charges to break the ropes and lower the chosen bridge. You can now go to the lift gate, which will allow you to move into the lobby.

Using the elevator in the lobby 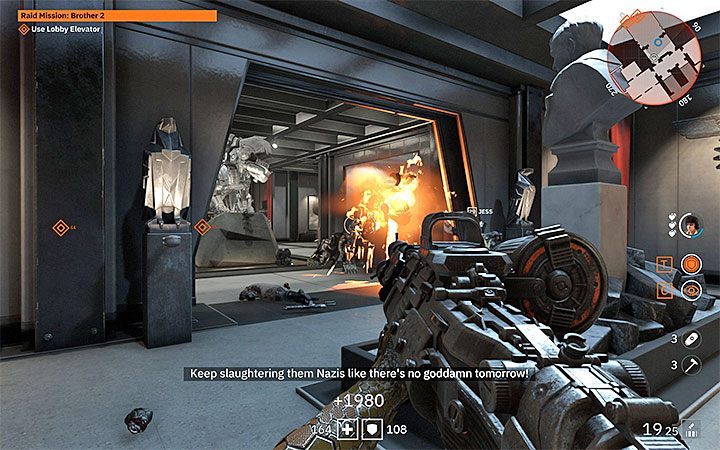 In the lobby, you can sneak around again even if you have fired off the alarm in previous locations. In particular, we recommend quiet elimination of at least one commandant. Watch out for Jager opponents and the Panzerhund. Better leave it for the end. Use good weapons to destroy horizontal shields and keep the Panzerhund at bay to avoid its fire attacks.

There are two elevators at the end of the lobby. You can choose any of them to get to the Lounge.

Climb to the top of the Tower 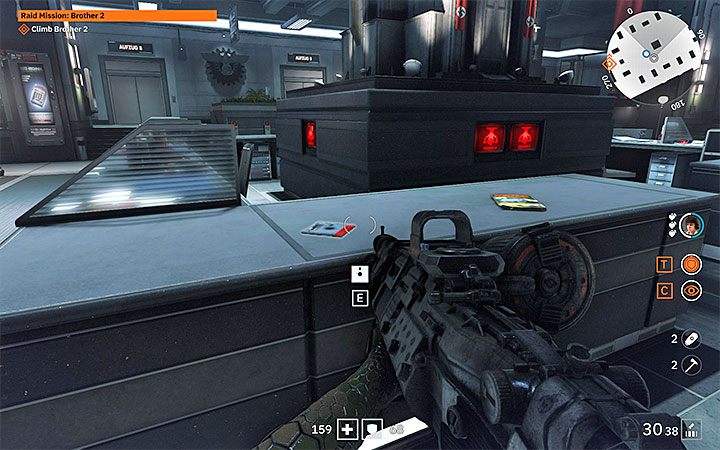 You cannot immediately get out of the Lounge, because the doors at the opposite end of the room are unlocked via a code through the keyboard. Start by getting rid of the nearby enemies.

Go to the central, square reception. Here, you will find a floppy disk (Re: Lounge door access code) (in the picture) and a Floppy Terminal to decrypt it. In our case, the code was 0451. 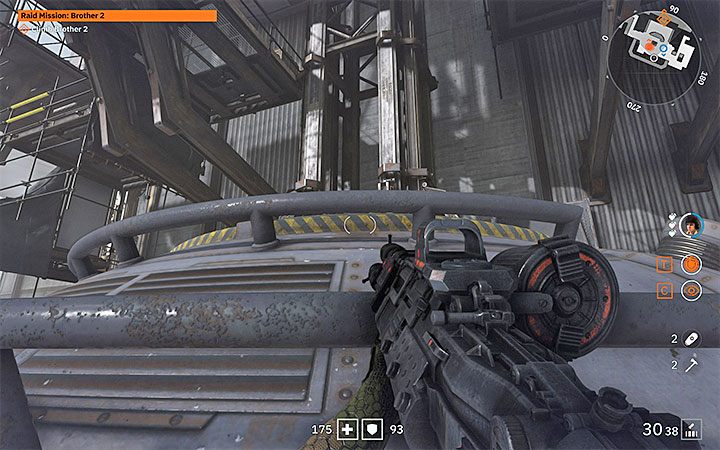 Shortly after opening the door, you will reach the outdoor balconies. You have to climb using double jumps. Make sure not to make a mistake and fall into the abyss.

Take advantage of the long staircase and enter the round room with two levers of the Docking Station. Each of the sisters must pull one of the levers. 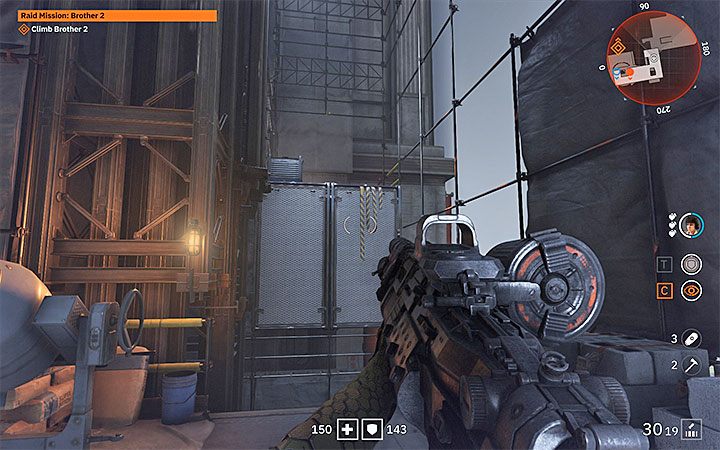 Go outside. In several places, you need to jump on the distant, or high shelves (see example in the picture), so be sure to rely on the double jumps that will ensure the success of such an action.

Again, get to the round room. There, you will find a yellow gate that you can lift.

Using the elevator going to the roof 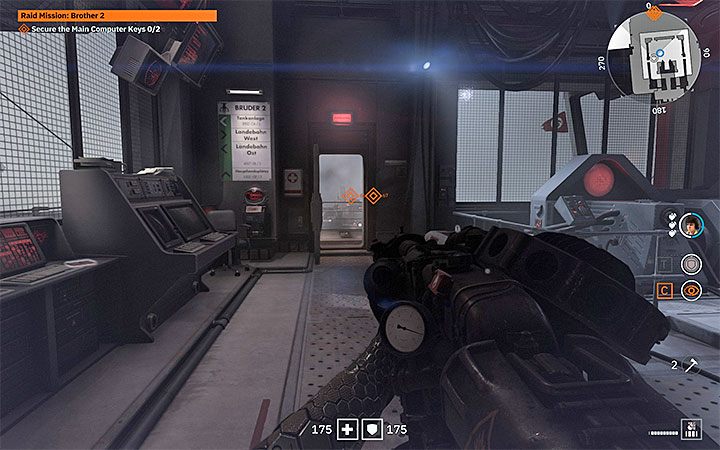 In the new room, there is just one group of opponents. You can attack them (one Supersoldat will definitely be among the enemies), or sneak to the elevator located at the back of this room. It travels to the roof, where the sisters will fight with a boss.

When you exit the elevator, search the neighborhood, and collect as many supplies that may be useful in the upcoming battle. You'll find here a chest with one common life. Use the Dieselkraftwerk to destroy any metal doors and unlock the passage to the roof.

Duel with the boss - Bruder 2 Ubergarde 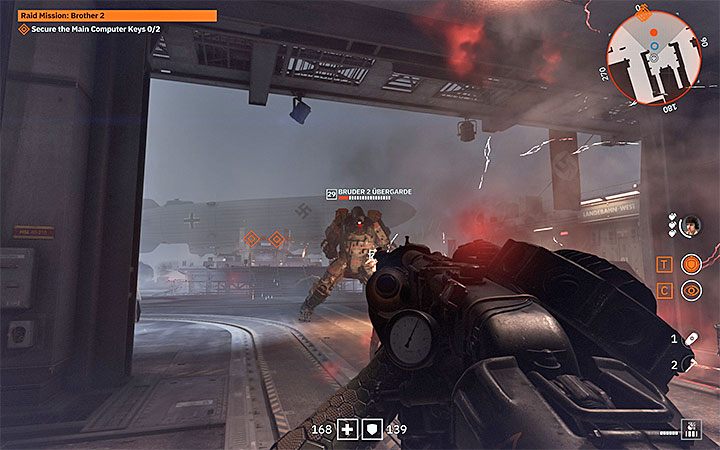 After reaching the roof of the Tower, you will face a boss - Bruder 2 Ubergarde. It's a big robot using heavy weapons. Bruder 2 has vertical rectangles on the armor bar. Choose the right weapons to destroy his shield. The Dieselkraftwerk you obtained earlier is one possibility. 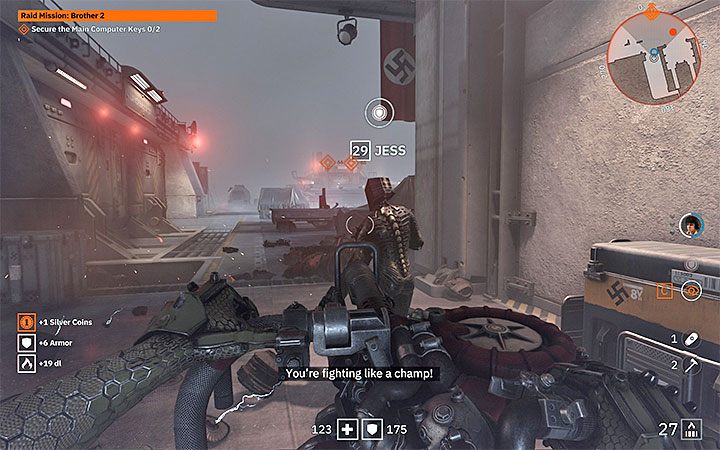 The boss can very quickly deplete your HP and armor points. Consider the possibility to go to the left of the take starting location and take position in the corner of the roof shown above. There are numerous major obstacles, which Bruder 2 cannot easily overcome. You can lean out from behind the wall, shoot the boss and hide when he starts his own massive attacks, or when you want to engage a boost. 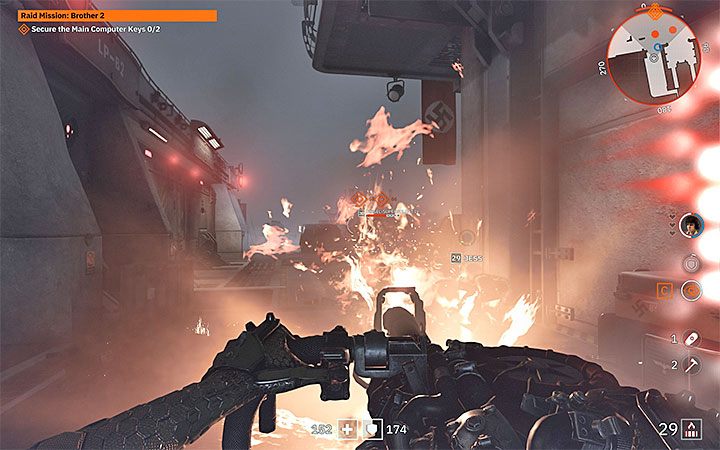 In addition to the main boss, you need to defeat at least 1 Diesel Supersoldaten and auxiliary drones. In this case, you can take the same position in the corner. Only use weapons that can effectively damage the vertical armor bars of the enemy (for example Laserkraftwerk or Sturmgewehr). 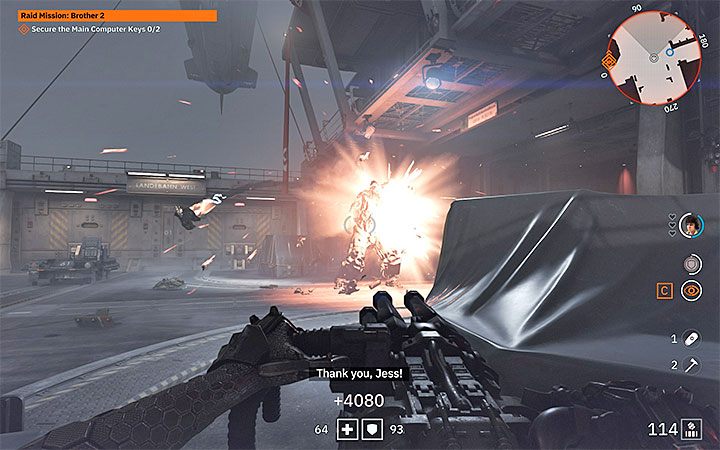 Do not forget about close cooperation between the sisters during the heat of the battle. Call for help if you lose all health and always save the almost-dead sister. On the roof, you can find a lot of supplies (health, ammo, armor), but to get to them, you need to go out into the open space, and it can be risky.

Continue attacking Bruder 2 until he loses the entire armor bar. Fortunately, its health bar is very short and can be quickly destroyed after the cover is destroyed. 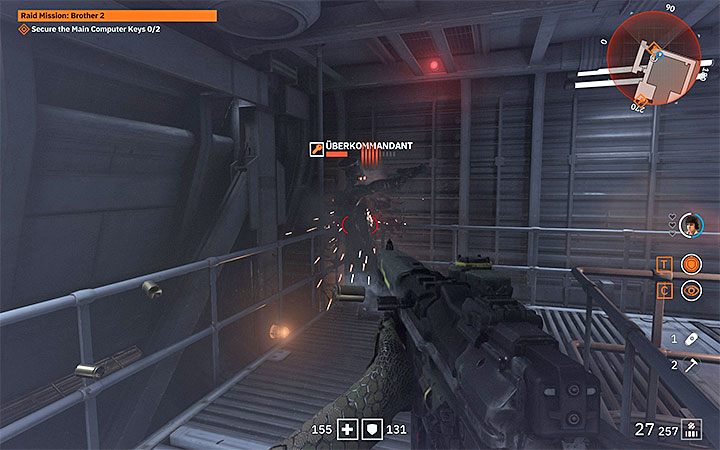 Killing the Uberkomandant chiefs is crucial. Each of them is located in the side rooms to the left and right of the starting point. When eliminating the commanders, do not rush because each of them is accompanied by a group of soldiers, including possibly Supersoldaten. After overcoming this Uberkomandant (use weapons to destroy the vertical armor) examine his corpse to obtain the Commander Key. 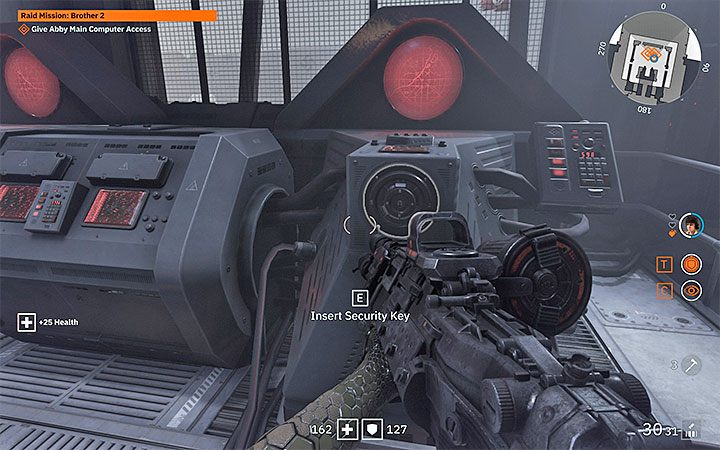 At the end, you need to get to the room with a large computer, located on the roof. Place both keys in the main computer and you will complete the mission.

An optional step is to unlock the metro in Brother 2 district. 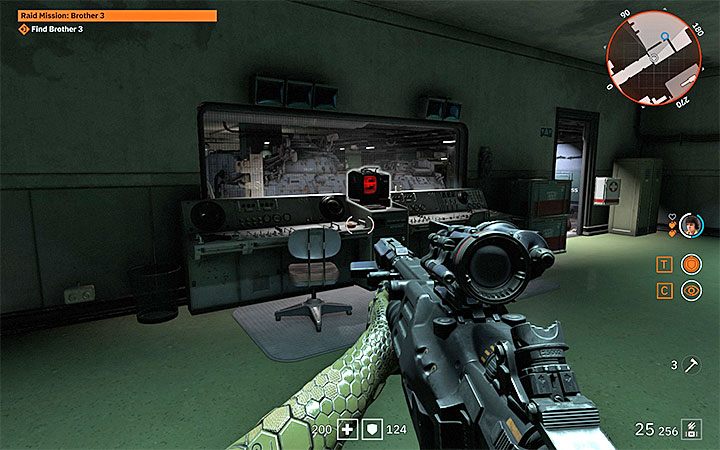 If you want, you can leave immediately by relying on the fast-travel option and move to the Catacombs. However, you can take the opportunity to unlock the metro stations in the Brother 2 district. This will allow you to easily return to this level in the future, if you will want to search for secrets or solve other missions in Brother 2.

You have to go back down. You want to get to the location, where during the initial stage of exploring Brother 2, you could chose to either take the elevator up, or use the stairs. Don't go back all the way to the basement (i.e. the metal structures surrounded by water) because you won't find an exit there.

Stay on the upper level next to the elevator and stairs. Find the terminal room shown in the image above. 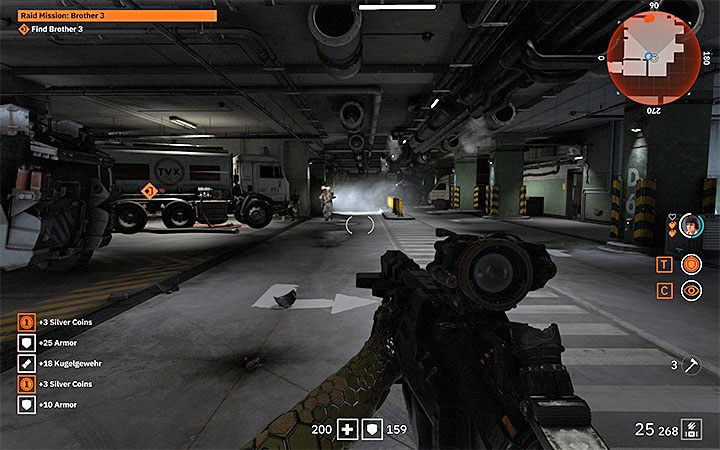 On the right, there is the exit from the room, and you will get to the underground parking. There is a small group of Nazis - kill or bypass them. 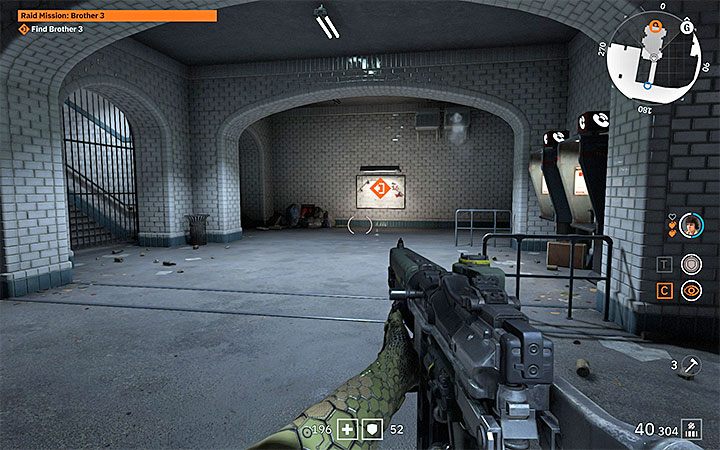 Approach the winded ramp that exits the parking. Destroy the lock on the left door. You will reach the room with a map of the subway shown in the picture. Interact with the map to unlock a fast-travel point in Brother 2.