On this page of the guide for Wolfenstein: Youngblood you will find a detailed walkthrough of the main mission - Riverside. This is the second main task of the game, played on the streets of Neo-Paris. The heroine will have to deal with several large groups of nazis on the way to the subway. Among them, there will be no real bosses, but you will encounter a Panzerhund and many Supersoldatens.

Our walkthrough concerns completing mission goals, playing out battles and solving puzzles. On the way to the catacombs, you can explore the city carefully and stumble upon numerous collectibles. We have described them in a separate chapter - Secrets. The game will allow you to return to this site later in the game, and it will be useful, for example, to find collectibles that require certain abilities. 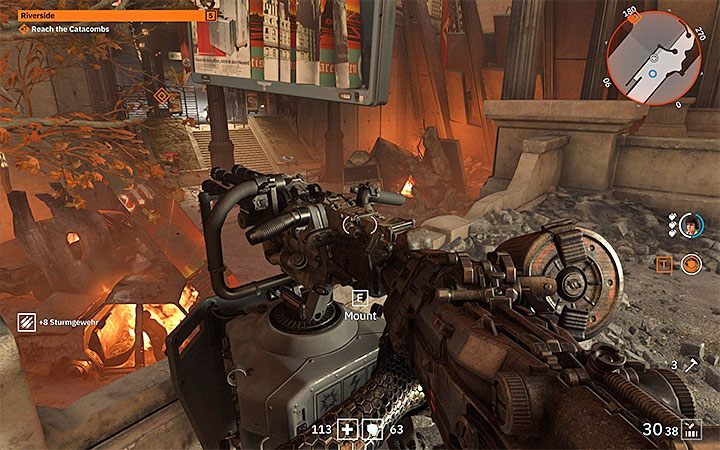 You will see the first group of enemies when you approach the area with a parked bus. Try taking them by surprise. You can, among other things, cross the right wall, where you will meet the commandant and find the stationary cannon from the image above. It can help you kill the nearby Diezel Supersoldat (for the record: they use flamethrowers).

Do not attempt to sneak up to Supersoldaten, unless you have acquired the skill of the Supersoldaten Hunter. Only after unlocking it (in the Muscle tree) you can perform quiet executions of these strong opponents. 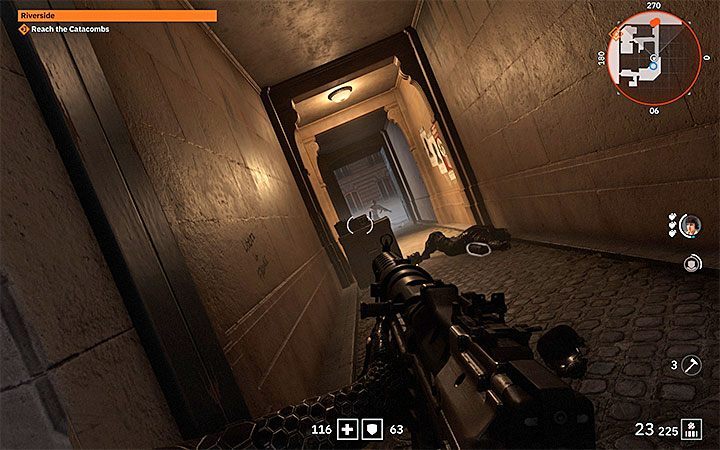 Go towards the stairs and the lit-up street. If you don't wish to engage in direct combat, you can sneak up to multiple enemies and perform a silent execution.

You can also choose the left alley. This will allow you to catch at least some enemies by surprise. The alley and the adjacent building are also good places to hide from massive enemy attacks after the collectibles are already discovered. Regardless of the chosen strategy, count on it to defeat the new Supersoldaten. 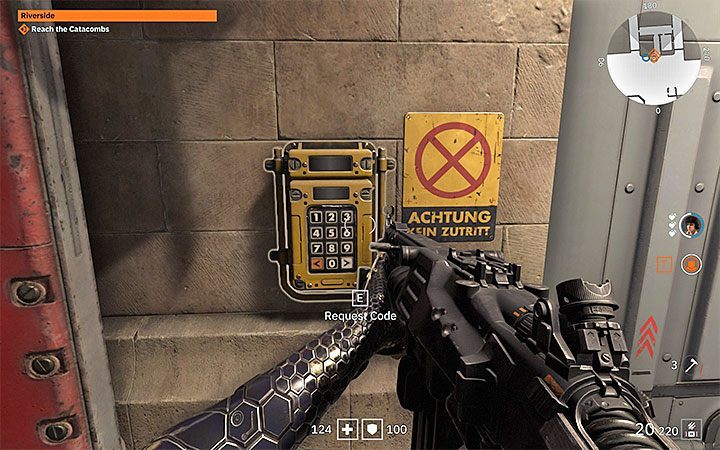 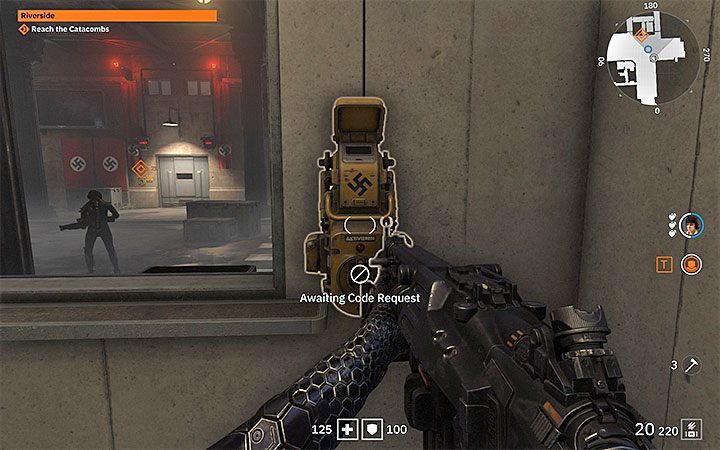 The access to the next location is protected by a code, and the puzzle here is a little different from the one in the prologue played on the airship:

If you are playing with artificial intelligence, go to the keyboard panel (picture 1) and wait for the second sister to "figure out" she should get to the code generator (it may take a few seconds). 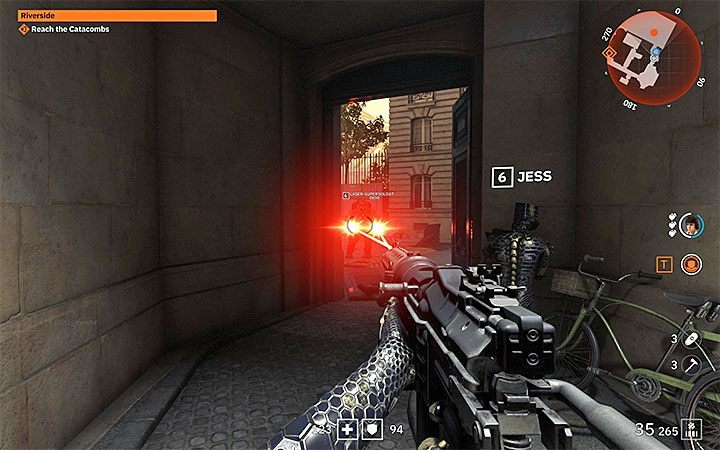 Beware of one enemy and get to the place where you find first grenades (Handgranate). They will be useful in the next location, which has a lot of new enemies. In the same place, there is a box with a new life, and two buttons - one for each of the sisters.

The battle can be started in a variety of ways, such as killing several enemies from cover or throwing them grenades before they disperse. Watch out for Laser Supersoldat during combat - he uses a powerful laser weapon. Jump to the sides or hide behind obstacles when he plans to use the laser. You can run through the alleys and inside the building. In addition, the first drones should appear here. You can easily destroy them with almost any weapon. After exploring the area, get to the yellow gate that the sisters must raise together. 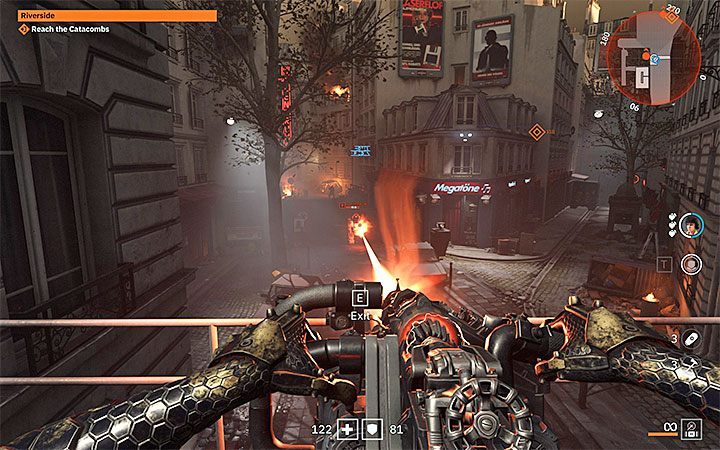 Navigate through several empty streets and use firearms or (better idea) melee weapons to destroy the lock. Start sneaking up on the barricade. It's patrolled the one opponent - the best idea is to kill him silently using a gun with a silencer or a throwing weapon.

At the barricade, there is a stationary laser gun. Using this is a great way to attack the surrounding opponents and, in particular, the huge mechanical Panzerhund dog. Keep firing until it is destroyed. Only then deal with standard opponents and the drones flying around. 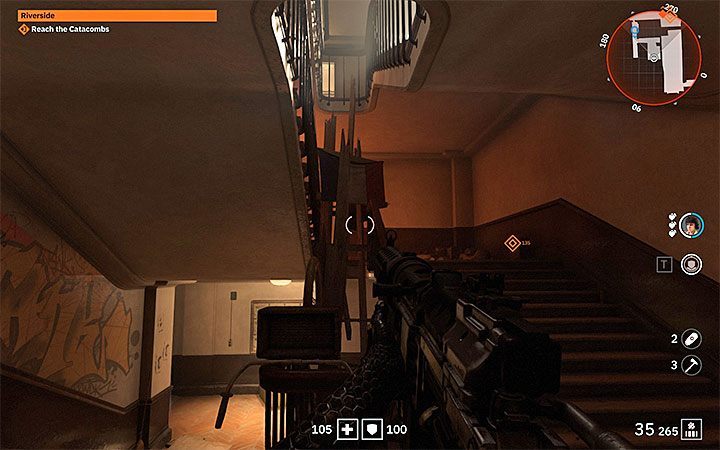 If you've been spotted prematurely or want to get rid of all the enemies, take care of the security system of the left building. You can get to it from the alley side, or by jumping through one of the shutters. Stairs allow you to travel between floors and get to all the Nazis hiding in the building.

Even if the alarm goes off, you can still be able to use laser guns. If, for some reason, it is not possible, attack the Panzerhund from a distance and use grenades. 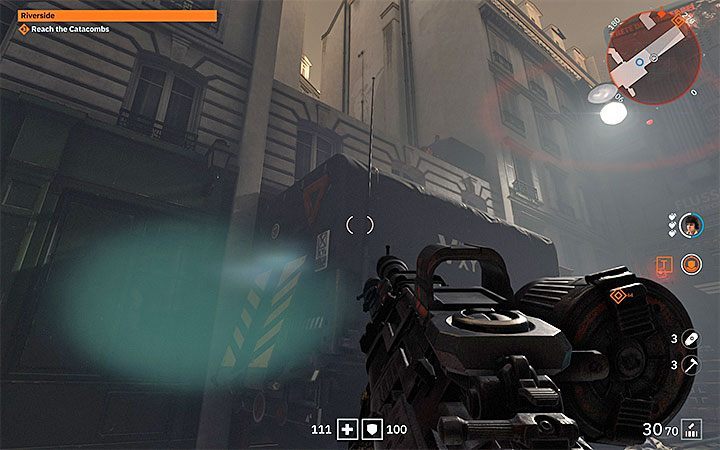 In the area patrolled by the Panzerhund, accompanied by ordinary enemies, there is a fork in the road. The left path is the main one, and it will lead you to the place where the sisters will be under fire from a laser cannon.

We recommend that you select the right path. Get to the place shown in the picture. Here, you can start doing double jumps to make your way up. Further journey along this path will allow you to outflank the defenders. We recommend starting with killing the commandant and only attack the remaining enemies after his death. Reach the new raised gate, which requires cooperation between the sisters. 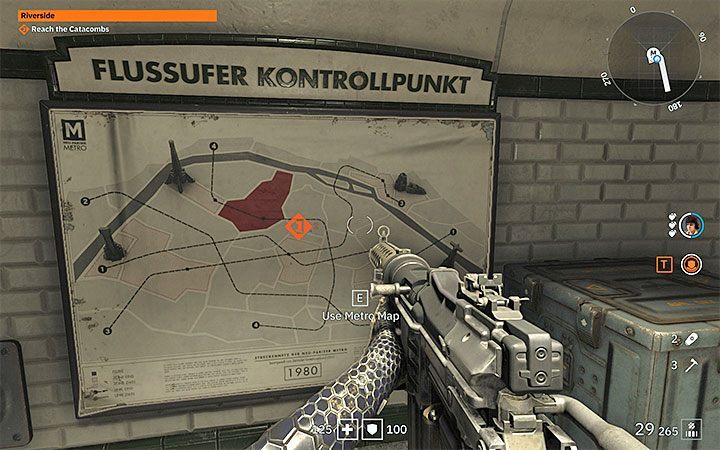 New opponents will appear right in front of the place of raising the gate, and it is recommended to throw a grenade before they scatter. Among the opponents is the new Diesel Supersoldat, so maintain proper precautions and use the right weapon for the Supersoldat armor type.

After the fighting ends, get to the subway and find the map shown in the image. Interaction with it prompts the map of Paris - select Catacombs - Paris Resistance Headquarters as destination.