On this page of our game guide to Wolfenstein: Youngblood you will find a nice set of starting tips. Pay attention to all important or unusual mechanics. With this knowledge, you will be able to complete the initial stages more easily and reduce the risk of failure. 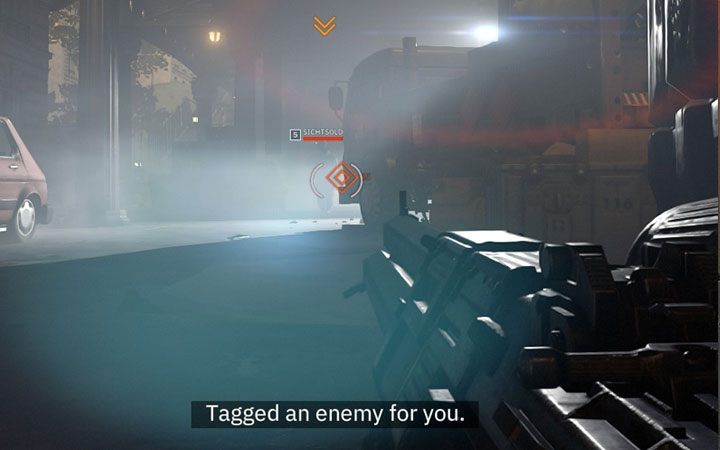 Wolfenstein: Youngblood does not force you to pass the campaign in cooperation with a real player, although this is a recommended way of playing the game. If you have a Deluxe Edition, you can invite someone who doesn't have a game copy to play with you. As a last resort, you can also try to play together with a random player. However, it would be a good idea to have a person who cares about you and explores the area carefully, because thanks to them you can gain a lot of supplies and find many collectibles (there are a few hundred of these in the game). 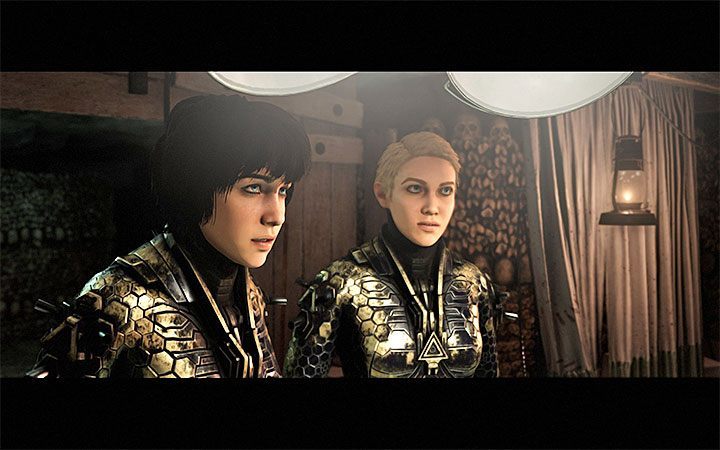 Jessica and Sophie are twin sisters. Although their starting skills and equipment may vary slightly (initial Skills and Weapons are chosen when starting a new campaign), they will ultimately have the same abilities and extermination tools. None of the sisters have unique features and this allows you to choose any playable character without worrying about something unusual or interesting being missed. 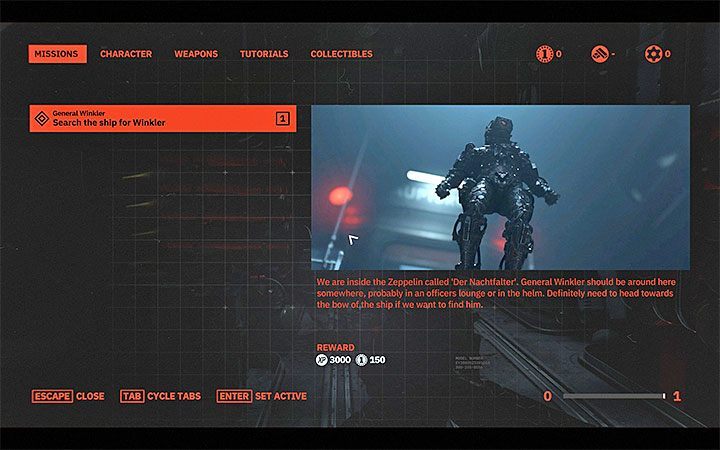 This is an important issue, ignorance of which can cost you the life of a controlled heroine. The game cannot be paused during a mission. This will not happen either when you open the options menu or when you open the journal/logbook. The events will continue to take place in the background. You may be attacked unexpectedly if you are in a location where there are still enemies or where enemy reinforcements may appear while browsing the menu.

If you need to visit a menu, do it only after you have dealt with a given group of enemies (and before you approach other enemies). 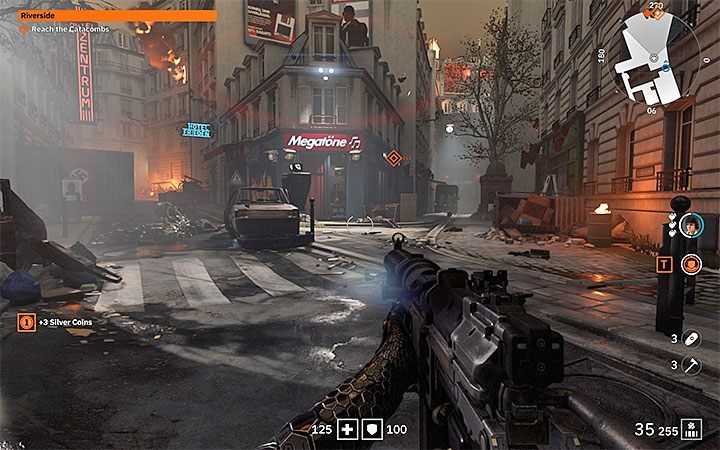 Wolfenstein: Youngblood rewards with many bonuses for exploring the area. This topic is discussed in more detail on the separate page of our guide called - Exploration and Collectibles. Below you will find some of the most important information: 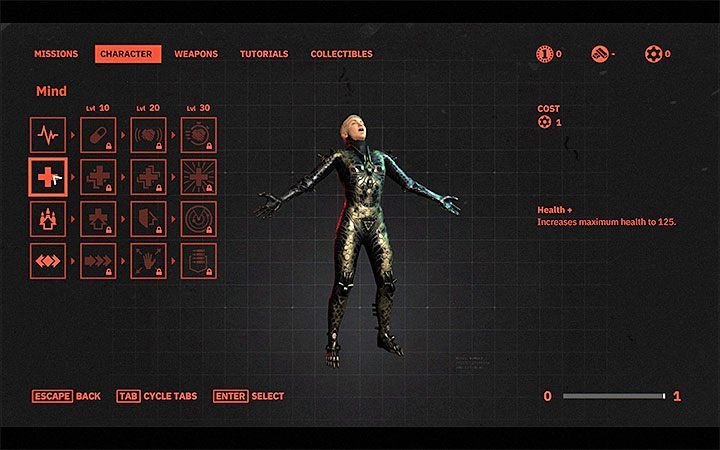 In Wolfenstein: Youngblood you can easily lose a whole bar of health points, but with some helpful abilities, you can make it easier for yourself to play the game. Try the following initial skills from the Mind skill tree:

Rely on Battle Shouts - Pep Signal as much as possible 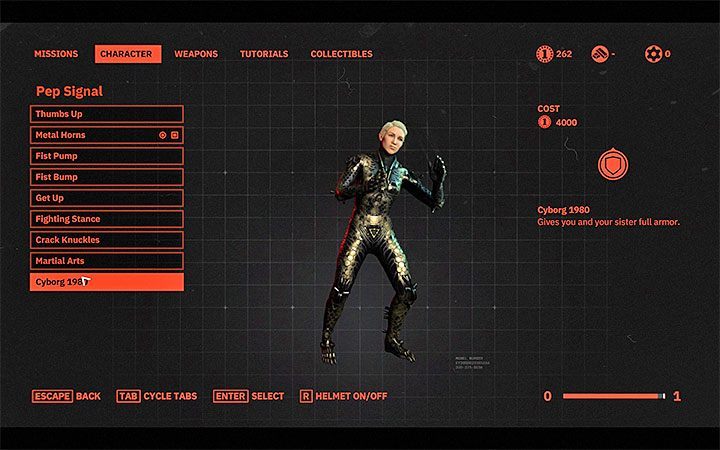 Boosts in Wolfenstein: Youngblood are called Pep Signals, which motivate both sisters to continue fighting. You will find all the information about them in the Pep Signal - Character Boosts chapter of our guide.

As a reminder, you can unlock one of the two shouts that can renew 25 health or armor points at the beginning of the game. An important feature is that every shout will work on both sisters regardless of which sister activated it. As the game progresses, you can buy more expensive shouts with silver coins that offer better bonuses. The best cry from the game is shown in the picture above - Cyborg1980 allows you to renew the entire armor bar. Unfortunately, it's not available in every copy of the game - it requires the Deluxe Edition and the Cyborg skins pack. Fortunately, the vast majority of battle shouts is available to all game owners.

Shouts do not consume supplies but require time for regenerate. Monitor the charging bar at the right edge of the screen and use pep signal as soon as it becomes available (assuming that your character needs regeneration at the moment).

Try to travel with a maximum supply of shared lives life and remember to resurrect your fallen sister. 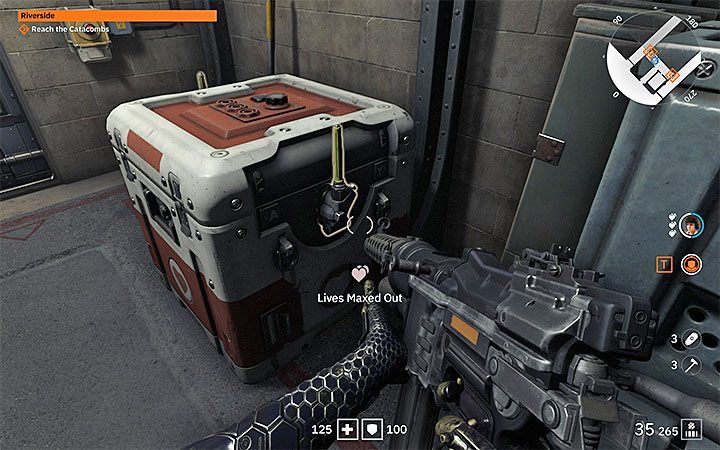 Sophie and Jessica have a common pool of lives - Shared Lives. Exhaustion of all available lives means the failure of the mission and necessity to start it from the beginning (the game does not create any checkpoints along the way). As a result, we advice to always look for chests with hearts similar to the one from the above picture. Opening each of them adds one life and you can have a maximum of three lives in reserve (when you reach the limit of lives, the others will not be added).

The topic of "managing" lives is discussed in detail on a separate page of our guide - How to increase the number of lives?. 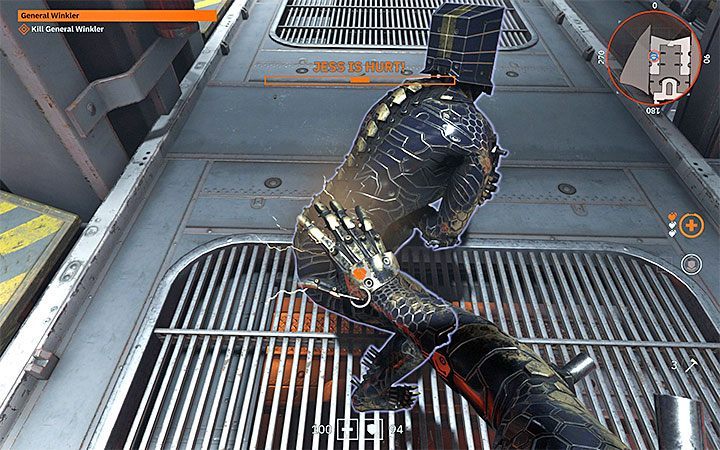 In addition to finding new lives, try to resurrect your fallen sister. You will always get a message that she needs help and you need to get to her before she bleeds out. If you save your companion, your life will not be taken from the common pool. The rescued sister will be able to return to battle.

The topic of mutual health rescue is discussed in detail in our trophy guide on the Rasputin achievement page.

Killing commanders makes it impossible to call in strong reinforcements 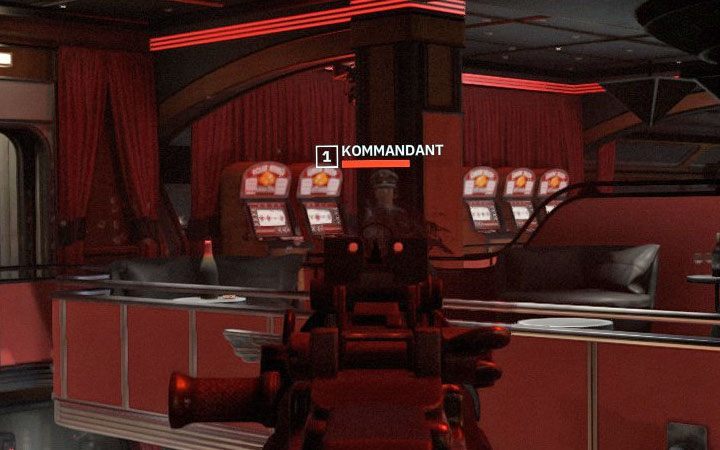 Before you start each new battle, you should look around from a safe distance to see if there are any commanders (one or more) in the area. Starting fights by getting rid of them (quietly or in a direct confrontation) will prevent opponents from calling for stronger reinforcements. However, know that ordinary reinforcements will continue to be called after the alarm has been sounded. Fortunately, dealing with them should be much easier.

Don't spend silver coins on skins or not useful things 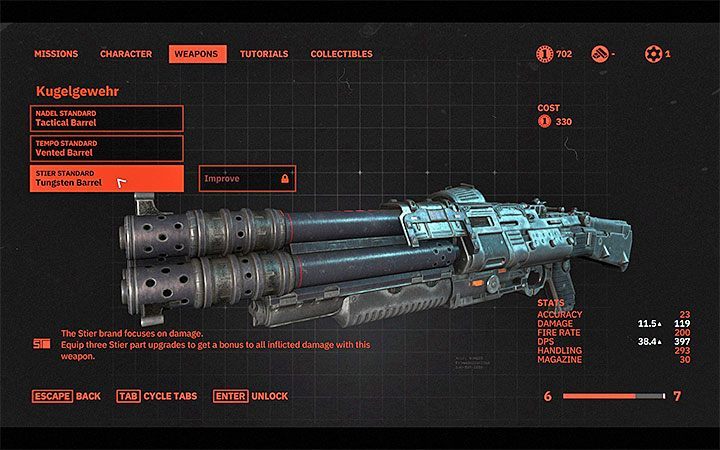 Silver coins are the main currency in Wolfenstein: Youngblood - they can be earned, for example, by exploration, or completing a mission. Spend coins only on the most important items, preferably from various categories. We especially recommend spending money on:

Don't spend money on armor, headgear or weapons. They can be very expensive (even for a few thousand coins apiece), and do not change the stats of the controlled form and do not affect the gameplay in any real way.

For more information on how to get money and spend silver coins, check separate pages of our guide - How to obtain silver coins? and What are coins for? 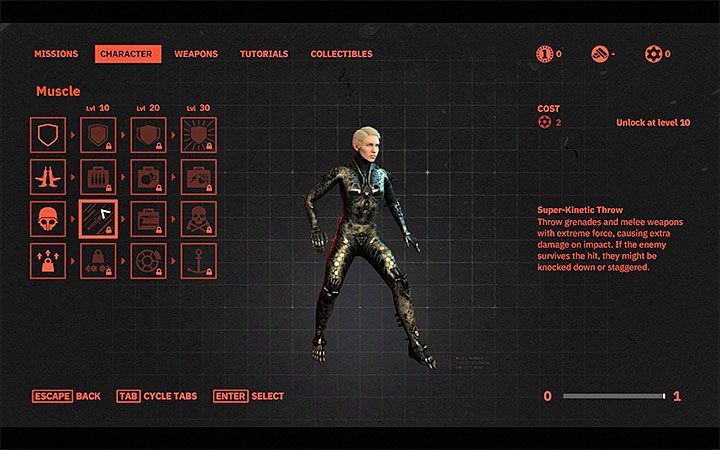 In Wolfenstein: Youngblood you can use knives and machetes for close combat and throw them at your opponents. The latter application is particularly important - throwing weapons inflict huge amounts of damage. Practically every attacked ordinary enemy can instantly die after the thrown weapon hits his body and slashes him in pain and full of gore. This is so exciting. The effectiveness of knives and machetes does not decrease even if your sister has been spotted and is not in a sneaking mode. What's more, when you kill an enemy, you can search their corpses and retrieve all "thrown" weapons.

The situation is slightly different in the case of enemies in armor and Supersoldats - they can "only" be slightly wounded as a result of a successful attack. However, this can also be tweaked a bit. Once you advance to level 10, pick the ability of Super-Kinetic Throw from the Muscle skill tree. It increases the damage and power of thrown weapons. Furthermore, even if the target does not die, it may be stunned.

Hideout lets you heal for free and replenish your supplies 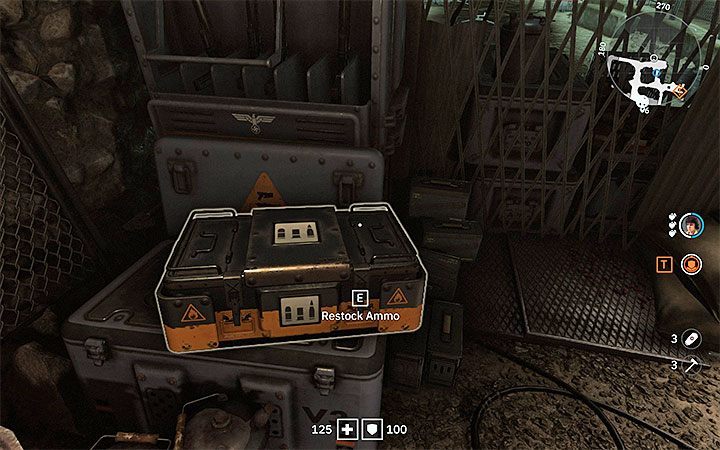 We described the hideout of the resistance, which is located in Catacombs, on a separate page of our guide. There are various attractions waiting for the sisters, but one of the most useful functions of the resistance hideout is the ability to restore your health points for free and replenish ammunition reserves.

Each time you return to your hiding place, we recommend to walk through it and collect supplies. Most of them can be found in the shooting range, which can be accessed by following neon signs with a rifle symbol. If possible, try to start each new expedition with full health, armor and maximum ammo. 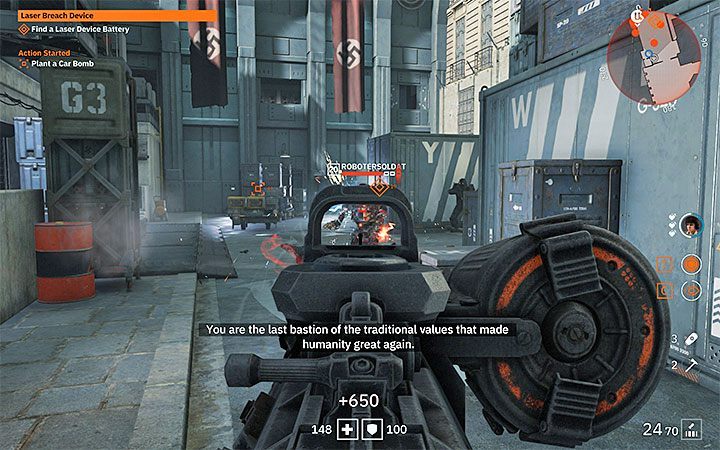 Every killed opponent in Wolfenstein: Youngblood gives you experience points, but it's not worth wasting time on cleaning the area of all enemies, because they can respawn. This usually happens after you have returned to the same location/district or simply after enough time has passed. All efforts to thoroughly clean up a specific area can therefore end pretty useless.

We advise you to kill only those enemies who are associated with certain missions or cause some threat in completing specific mission objectives. If an alarm is triggered, you can try to get rid of all reinforcements or simply leave the place and ignore new units of enemies. For more information on how the respawn system actually works in the game, check a separate section of our guide called - Can enemies respawn?.

Beware of too strong opponents and too difficult missions 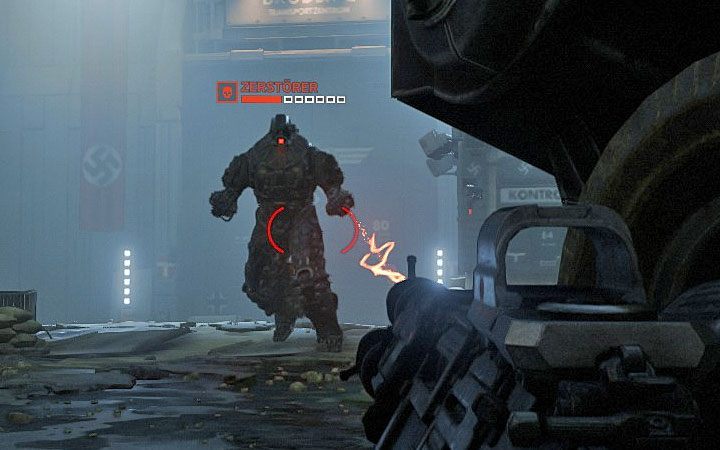 In Wolfenstein: Youngblood, each opponent has a specific level of experience and each mission has a recommended level of sisters' experience. It is worth remembering both of these factors. Attacking an enemy that is too strong can result in a total defeat - it will be very strong and can deal large amounts of damage. Opponents who are definitely too strong for sisters have skull icons visible above their heads (instead of standard information about their current level).

It's quite similar with quests and missions. You have little chances of surviving in a mission marked with a skull icon and therefore with a much higher recommended level. In both cases, concentrate on easier opponents and missions. You will be able to play the game freely and gain XP at the same time to advance to the next level. More information can be found on separate pages of our guide - What are the skull markings attached to names of enemies and missions? and Character development and weapon upgrades.