On this page of the Wolfenstein: Youngblood guide, you will find a detailed walkthrough description of the main mission - Der Nachtfalter, in which the Blazkowicz sisters get on board the airship with the intention to hunt down and kill General Winkler. This mission plays the role of a prologue, although it has several intense battles.

Our step-by-step guide focuses on the missions' objectives, battles, and puzzles. Completing missions might cause smaller or bigger problems depending on whether you play with artificial intelligence (it copes very well) or with another player, who's willing to cooperate. If you, in turn, are looking for secrets' location, please read the separate Chapter on secrets in our guide.

Suggestions for choosing the main character, starting equipment, abilities, and setting the level of difficulty have been placed under Sister selection and Difficulty level section of this guide.

Navigating through the airship 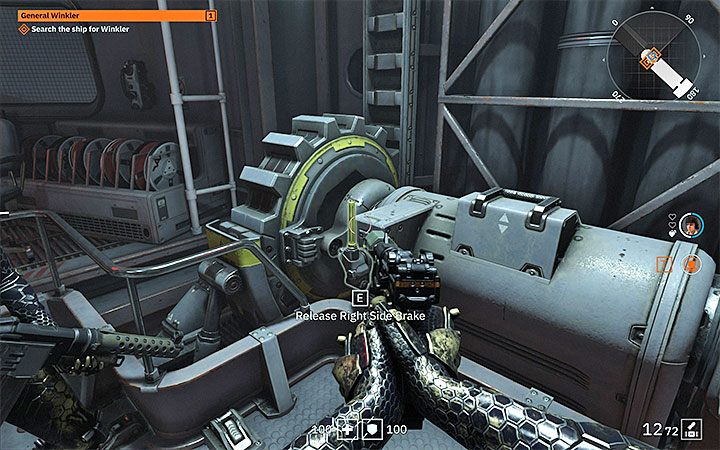 You begin the mission onboard the airship. The first enemy (Neosoldat) can be killed in various ways, for example, you can shoot him or sneak from behind and execute him. Each sister must then stand by a separate brake lever. After both levers are switched,the platform safely goes down to the lower level.

Once you find yourself in the Armory, search the surrounding cabinets because you can find there a new weapon - Blitzgewehr. It is a very good machine gun. 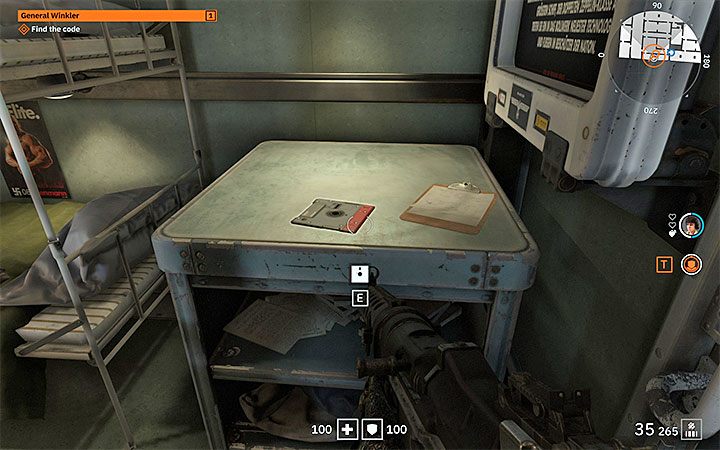 The next section contains a large group of opponents. You should be able to kill at least a few of them by quietly sneaking towards them from behind, or using a pistol with a silencer, and aiming for the head (only if the enemy is not using a helmet). After causing the alarm, observe the mini-map readings to make it easier to read the opponents' positions.

The exit doors of this area have a lock protected by a code and so you need to solve the first mini-puzzle. Locate the encoded Encoded Floppy Disk - Der-Nachtfalter Door Code nearby - shown by the screenshot above. 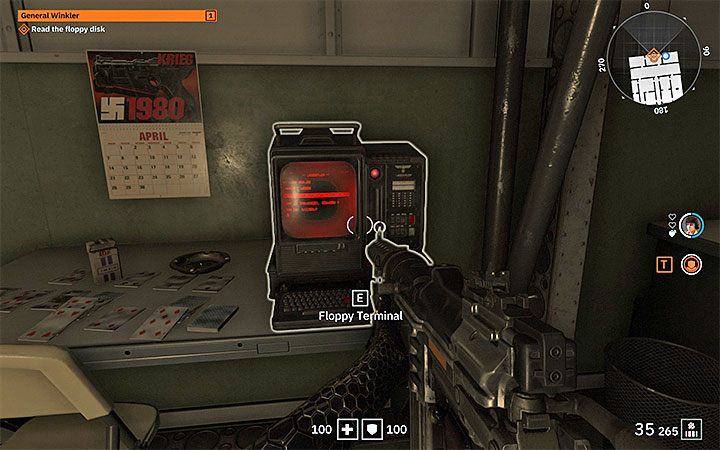 Continue exploring the area until you come across the computer with a floppy disk station - shown in the screenshot above. 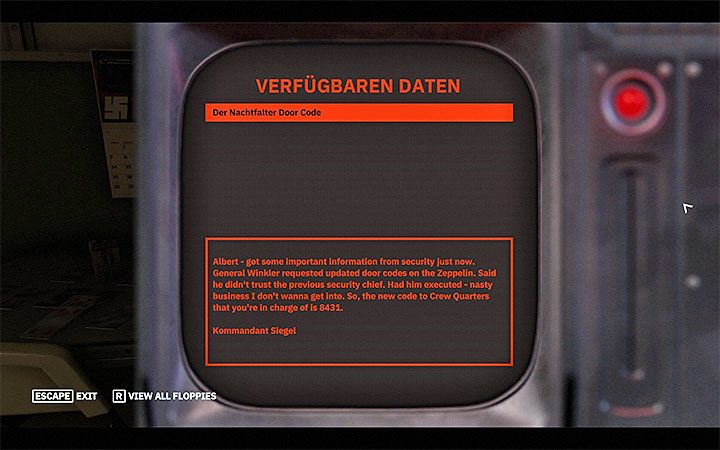 After the main menu is loaded, select the floppy disk and press the decoding key. You will learn a four-digit code to the door - in our case, it was 8431. Return to the keyboard at the door and type in the correct code. 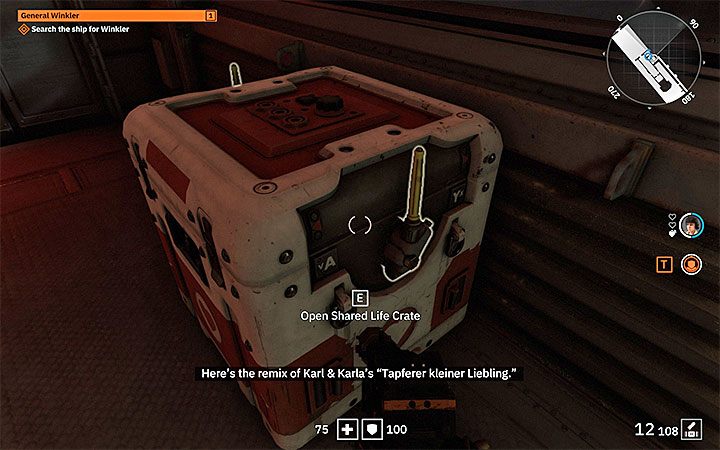 Go downstairs. In the new part of the airship, it is again advisable to act stealthily for as long as possible. After engaging in combat, focus your attacks on Kugelsoldats, who use armor. Expect also that new enemies may suddenly appear in previously cleared areas.

You can also explore the surrounding quarters or immediately get to the yellow barrier, which the sisters have to raise together. In the next section, for the first time, you will find a Shared Life Crate. Opening it will add 1 life to the overall pot (i.e. each sister will be able to spend the extra lives received in case of death). 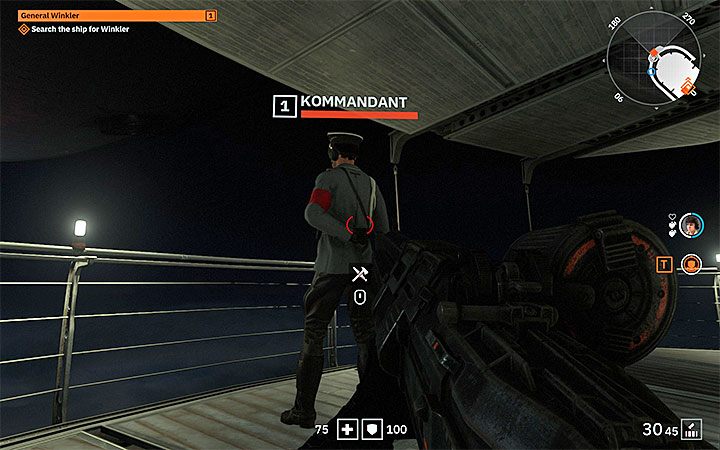 You have to start a journey through the outer balconies of the airship. On the way, you encounter the first Kommandant. Try to eliminate them first in each battle, so they can not call by stronger reinforcements.

Enter the great hall. You can immediately start fighting or try to first quietly kill some of the surrounding enemies. In addition, you will find a new useful weapon - Sturmgewehr, which is especially useful in the destruction of protective Kugelsoldats (horizontal white rectangles visible above their heads). Clear the whole area from the enemies, collect loot, and get to the sliding doors that the sisters have to open together. 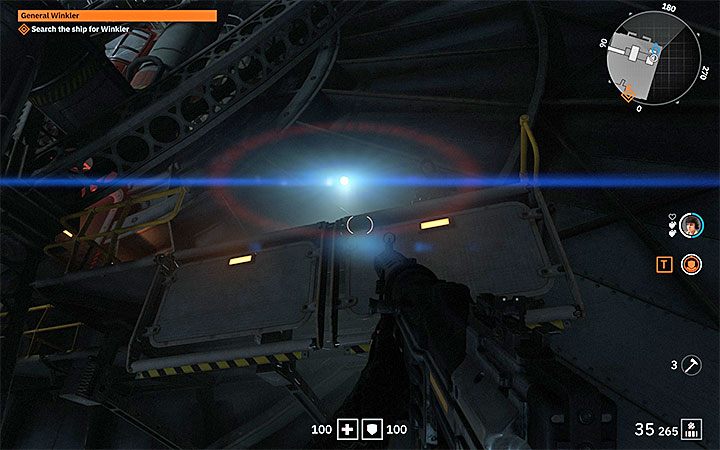 You will find yourself in the elevator shaft where you have to start using Power Transitions for the first time. They are activated by pressing the jump key again during when in mid-air. Thus you will be able to jump to otherwise inaccessible platforms.

Deal with two technicians on the way. There are also new throwable items in the area. Keep performing double jumps. Remember that it's enough to jump near an edge for the sister to grab onto it and pull herself up. 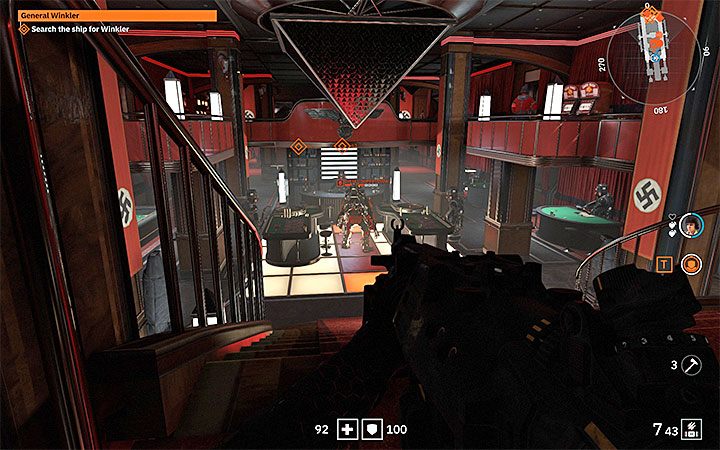 Once you reach the highest level, go through the long balcony. In subsequent areas, it is recommended to use a flashlight. Light your way. Eventually, you need to get to the hole in the floor leading to the next section of the airship.

In the new place, you will meet the supersoldat for the first time. The game will give you a hint about the attack on armored enemies using the right types of weapons. This topic has been described in more detail in our tutorial on trophies on the page describing the Right Tool for the Job achievement. The perfect weapon for the destruction of the shield super-soldier will Sturmgewehr. 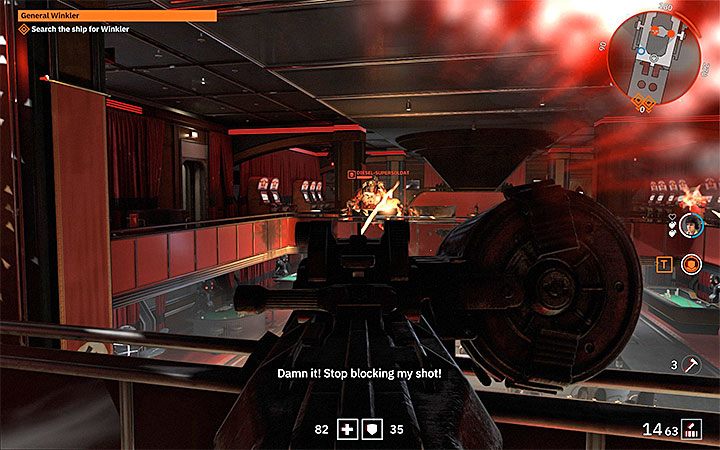 You can immediately attack the super or first sneak up a little and, for example, eliminate the commandants. After engaging in combat, move around a lot and use both levels. Try to keep your distance from the Supersoldat, as he is equipped with a flamethrower. In addition, the adversary can charge.

After winning the battle reach two new levers. Each of the sisters must pull one of them to open the passage. 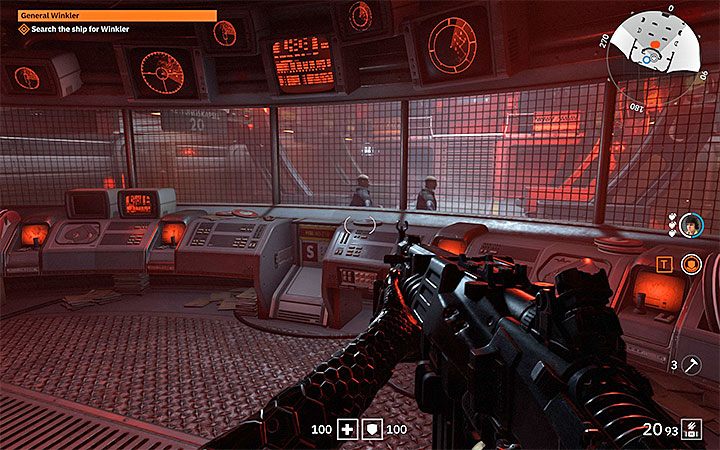 Start a linear walkthrough and watch out for a new box with an extra life. You will find a lot of weapons and it is a good opportunity to restock ammunition.

The sisters have to work together and push the big hatch. Eventually, you will reach the control room shown in the screenshot. General Winker will appear in the neighboring room starting a boss fight. 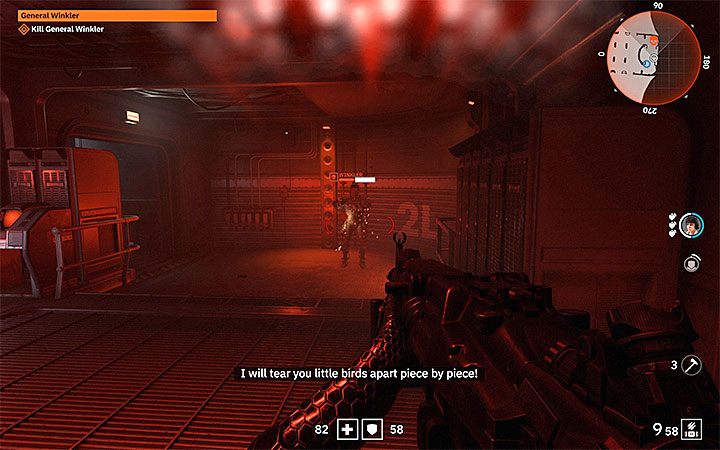 General Winkler uses the same disguise as the one provided by sisters' abilities. This means that he is not completely invisible. You just need to look more closely to see his silhouette. Shooting at General temporarily disables his disguise and allows you to attack him more easily. 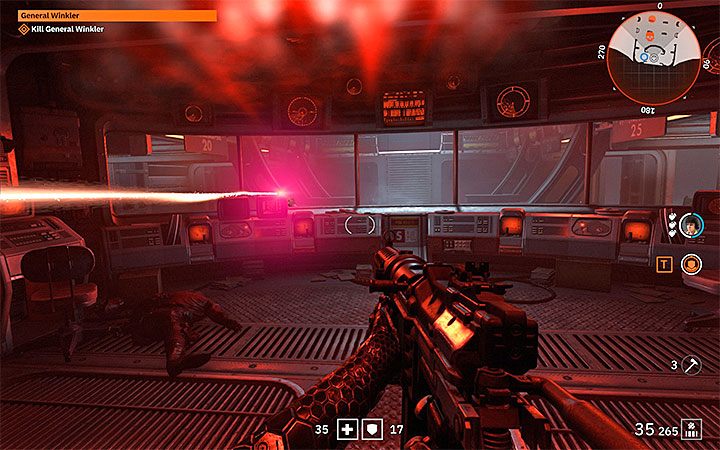 Apart from standard attacks, the boss can shoot at sisters with lasers. They have a great killing power. If your sister is attacked, hide behind walls and other obstacles. If the second sister is attacked, use this to your advantage and attack Winkler. 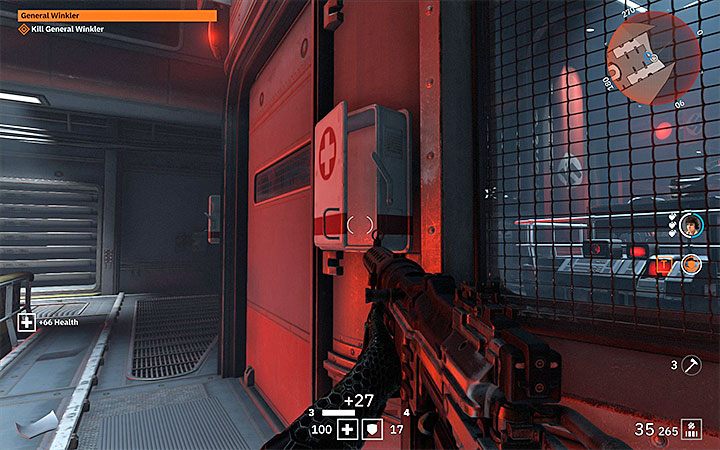 During the fight in the lower control room, reinforcements may appear. Fortunately, these are weak opponents who can be easily killed.

If you need treatment, armor or ammo, then jump to the upper balconies. There you will find many useful supplies. And don't forget to help your sister if she falls to the ground and starts bleeding. 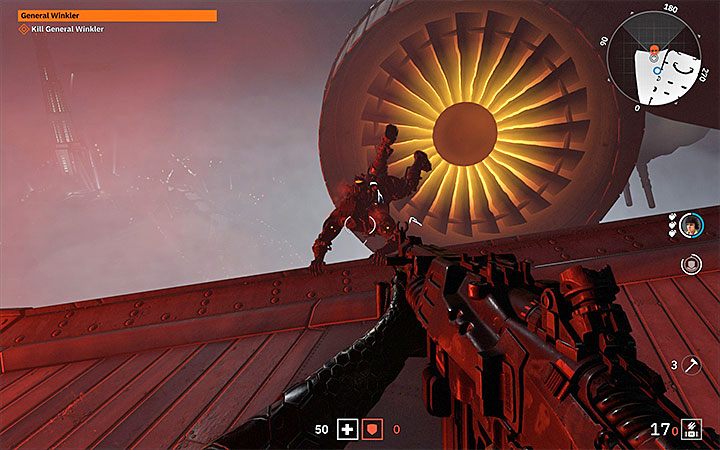 The final stage of the battle will move to the street. Attack Winkler until his health bar is depleted. The boss will lose his balance, but he will hold on to the airship's wing. Shoot Winkler, so he crashes into the engine and dies. You thus cause the airship to crash and the mission is complete.