All rise for here comes the judge! The guide to We. The Revolution will allow you to complete the game, solve the most difficult court cases and maneuver between the intrigues. We have prepared for you, in particular, step by step examples of missions in the game, a few tips and the most important information that will facilitate your gameplay.

We have prepared some starting tops, which provide advice on how to be an effective judge. We also thoroughly discussed the interface and the most important options, as well as gameplay mechanics. We also presented the rules of spending the evenings in We. The Revolution, and actions on the map of France. We have also prepared a description of how to pronounce sentences in the game, what are their consequences, and the formation of reports on the completion of the process.

In the FAQ section, we have provided answers to a few key questions from We. The Revolution. We have collected the most important questions that every novice judge has in mind and we have prepared an honest answer for them. The guide also contains a walkthrough that shows how to finish sample missions from the game's first act.

We. The Revolution combines elements of several genres. After taking over a particular case, we need to review the file, the evidence, and question the persons associated with it. Thus, we obtain the necessary information that helps in delivering the final, more or less fair, verdict. The plot is the driving force of We. The Revolution. The action of this game takes place in the 18th century, in Paris, during the French revolution. The protagonist is a judge of a Revolutionary Tribunal that judges revolutionaries and their opponents, as well as criminals and ordinary citizens.

During the game, we make various decisions, including those on which depends not only the career of the hero but also the life of his own family and the fate of his friends. As we make progress, our character gains more and more influence, which allows her to participate in various conspiracies, and as a result - the beginning of the struggle for power. The fact that the main character is struggling with gambling and alcohol addictions is also important for the story.

How long is We. The Revolution?

Completing We. The Revolution will take a different amount of time - a lot depends on how thoroughly you read the cases, whether you read all the additional documentation, etc. In addition, the game has an RNG and daily court cases are selected from a specific pool. So, completing the game should take about 10-15 hours.

Is We. The Revolution non-linear?

To some extent, yes. We. The Revolution features a few solutions and processes that can be solved in a number of ways, and therefore lead the storyline differently. From time to time we also have some events that further change the gameplay. It is also worth adding that daily affairs are selected from a certain pool and during one game, we will probably not take part in all of them.

Can I influence the story in We. The Revolution?

Yes! In some moments, you will take part in some important trials, such as the treason and the process of King Louis XVI. It's up to you if you decide to behead the monarch, or maybe, for example, put him in jail or even acquit him.

Are choices in We. The Revolution permanent?

The game allows you to save and load, and it is worth using it. Some choices don't affect the game before, for example, the next day, or a few days later. So, you should carefully read the notes, letters, and events, in order not to regret, for example, refusing to give guards some weapons, and learning the next day that the revolutionaries killed them as they were defenseless.

Can you die or lose in We. The Revolution?

Yes. Our actions in court resonate with the revolutionaries, the people, the families, and the aristocrats. If we push any group too far, we could be killed or put in jail. Therefore, it is necessary to maneuver between cases so as not to neglect any of them.

Can I repeat the trials?

No. The trials can only be repeated by loading the game. The decisions made in the game are final, and if you send someone to the gallows, their head won't magically grow back, you know.

Here, you can learn the basic tips and tricks for the game. The Revolution. The following chapters describe the interface, how to spend the evening at home, how to build a good relationship with relatives. You will also learn the mechanics of managing agents on the map of France. We have also prepared a section that describes how to make decisions and write reports on the completion of the processes.

Another section of the guide includes a walkthrough and a step-by-step guide to the main trials in the first act of the game. Act 1 - Freedom, offers a few interesting cases and introduces you, step by step, into the increasingly complex gameplay mechanics. We have prepared a description of some hearings - don't be surprised, however, if some days will bring different cases. The game is nonlinear and some cases are randomly selected from a large pool prepared by the devs.

About We. The Revolution Guide

We. the Revolution Video Game 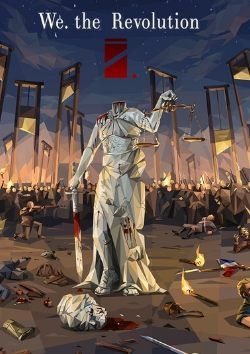 The story is the main drive for We. The Revolution. The game is set in the 18th-century Paris during the French Revolution. The main character is a judge of the Revolutionary Tribunal, who judges the revolutionists and their enemies, as well as criminals and ordinary citizens.

During the game you get to make various decisions  including those that determine not only on the course of the protagonists career, but also the life of his own family and the fate of his friends. As you progress in the story, your character gains ever greater influence, allowing him to participate in various conspiracies and ultimately to launch a power struggle. Besides, it is not without significance for the story that the protagonist is struggling with gambling and alcohol addiction.

Released for PC, We. the Revolution combines elements of several genres. After accepting a particular case, you have to look through the files and the evidence as well as interview people involved. This way you come into possession of key information needed for reaching the final verdict  either just or one serving your interests.

A special system of intrigues supervises your actions, owing to which your choices do not go without impact on the balance of forces in the capital of France. It is worth mentioning that in-gmae events are generated procedurally, which positively adds to replayability  each time you start a new game, there are different cases waiting to be resolved.

More About We. the Revolution

Does Your Voice Matter? Discussing Choices in Video Games

Will you kill a man and take his food, or will you go your way? Game developers have fallen in love with moral choices, but if you play enough games, you may start to feel that they have little to do with choosing, and even less with morality.

This site is not associated with and/or endorsed by the Klabater or Polyslash. All logos and images are copyrighted by their respective owners.