On this page of the Watch Dogs Legion guide, you will learn how to complete the last mission of the Albion's Missions chapter. This mission is called In the Belly of the Beast. In it, your main goal will be to learn more about project THEMIS.

The last mission of Albion chapter one. This time you'll have to go to Tidis. Go inside the building, you can use the character with the uniform of this organization to be able to better infiltrate the building. 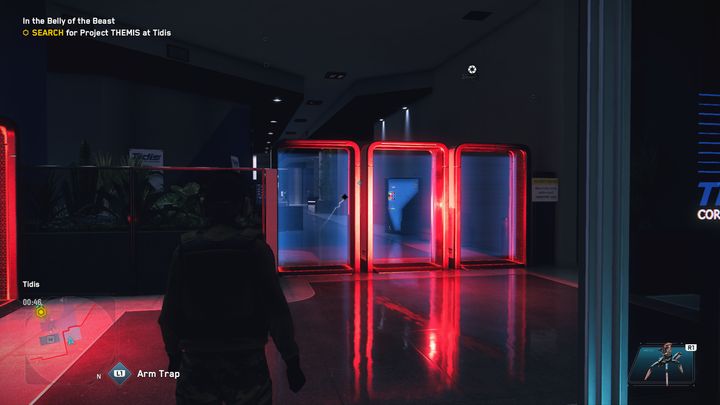 Your job is to find the THEMIS project plan. First go to the top floor of the building. Deal with your opponents or sneak in there. The door will be locked, so approach the terminal. 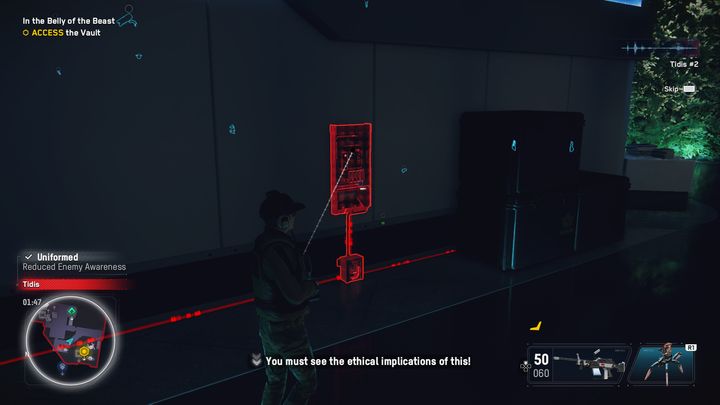 Interact with the terminal and then go inside the room that was previously closed. Also get the nearby access key. Then, once you're inside the room, head upstairs and get access to the schematics. 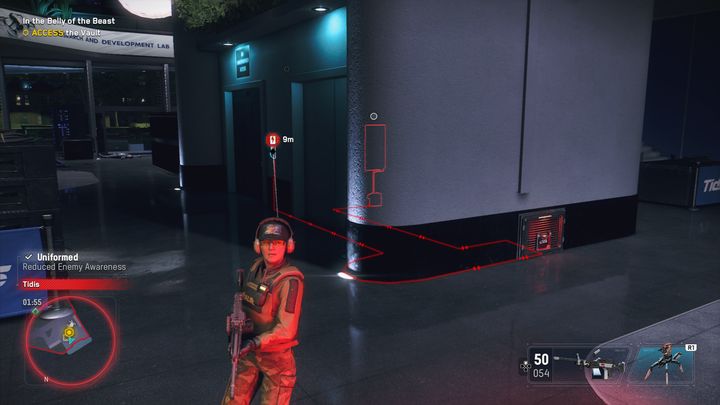 Then go downstairs and head for the elevator. It will be closed, so use the spider-bot (if you do not have this gadget, there is a bag with arachnids close by). Climb through the ventilation shaft with your spider and unlock access to the elevator. 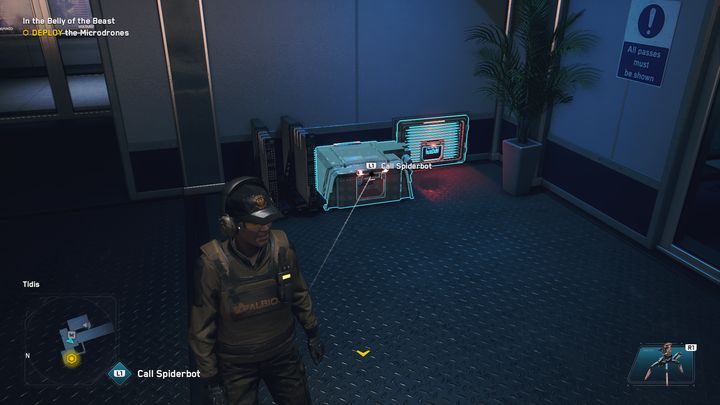 When you interact with the elevator, you will appear in a new room. Use the arachnid and go inside. Then go to the end of the corridor and jump down. 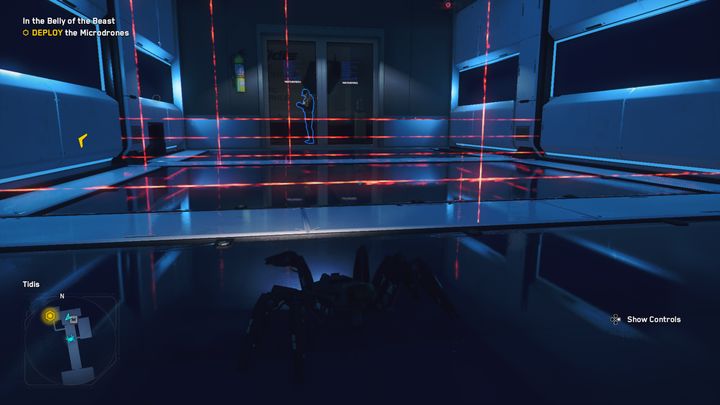 You'll find yourself in a room full of lasers. You must be careful that none of them hurt your spider-bot, because else you will start from the beginning. The first laser beam goes from left to right and stops in the middle. When it's in the middle, move the spider forward. Then 3 laser beams will appear, two of which will move vertically. Jump the spider-bot over the laser beams when they're at the bottom. 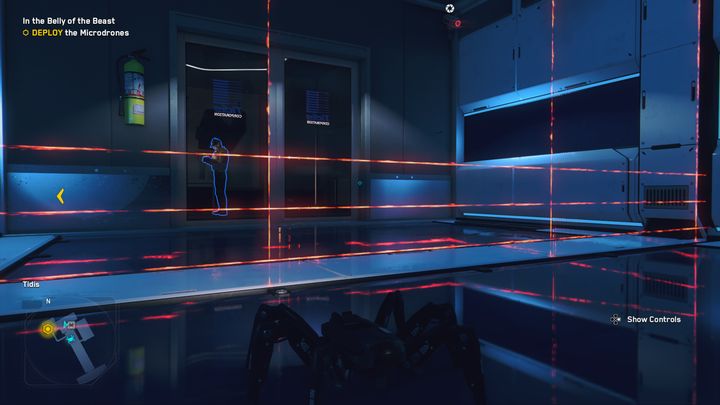 3 the laser test consists of the fact that the center laser stands still all the time, while 2 more lasers bounce off the center and return to the extreme left and right sides. Place the arachnid on the left or right side as much as possible, when the laser beam goes inside, move the arachnid to the next stage. Stage 4 is simply a laser beam that is close to the ground, and one moving left and right, jump over it. 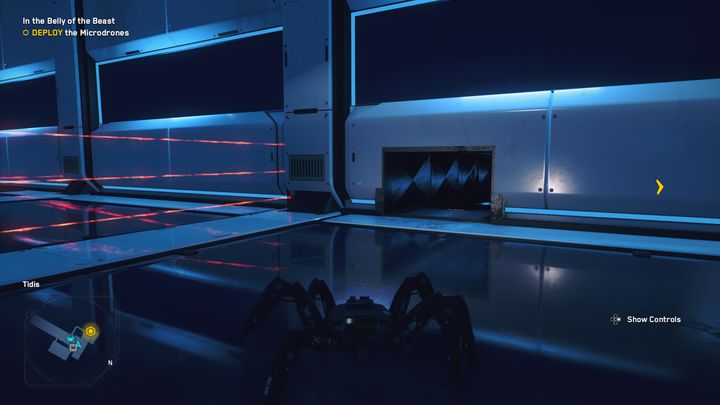 The last laser stage consists of 3 laser beams moving vertically and 3 horizontally. Vertical ones are fast, but there is a long delay before their start, while the 3 horizontal ones move slowly, but all the time. Find the gap and jump the lasers, or run fast as they go up. Then, on the left side, enter the ventilation shaft and interact with the device. 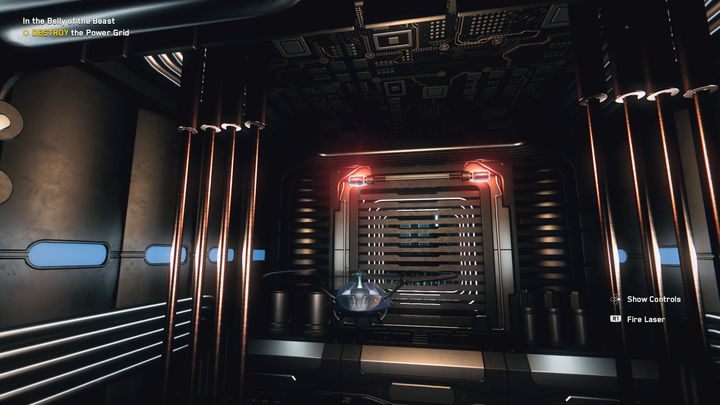 Now you will control the micro drone, you will have to go through it through many rooms, which are also difficult to access. To begin with, fly up to the end of the corridor and destroy the left and right side of the red fuses, shooting them with a laser. Then fly forward and destroy more fuses. 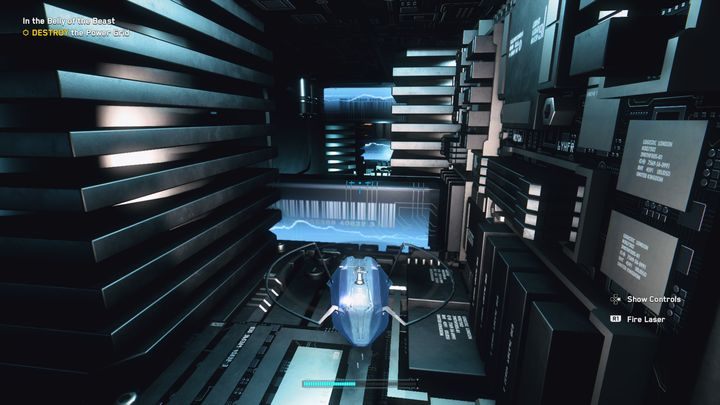 The next obstacle will be the wind and electrical panels. The wind will push your drone into the panels, causing damage. On the right side at the bottom, there is a road that blocks the wind. Get down to the level of the wall and fly to the next room, destroying the next fuses. 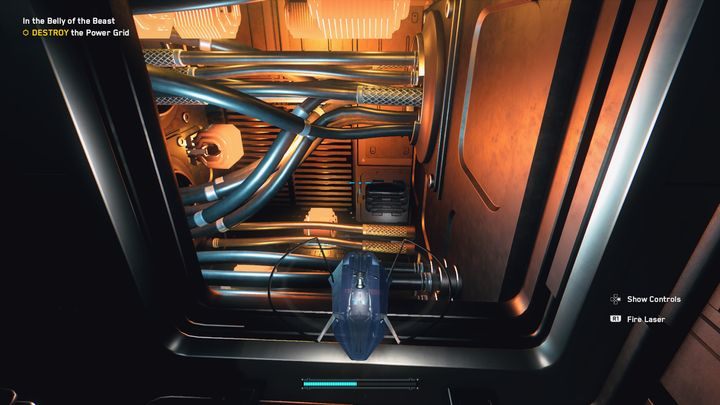 The next room is very hot. Barge into the next room at the moment when the light will fade significantly, so as not to receive damage from the high temperature. Keep an eye on the cables so you don't fall into them. 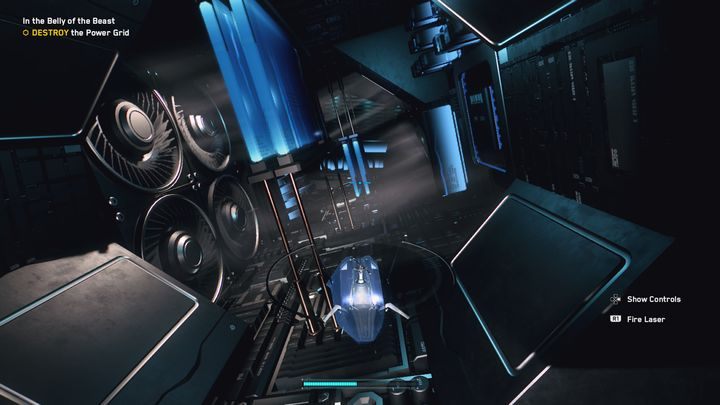 Then use the electrical panels. Get up from the right side so that the panel blocks the wind and does not throw you into the panel or wall. Then lower yourself to the second panel, however, place yourself on the left side, avoiding the wind. Go to the next room. There, the wind will just accelerate your drone, so set yourself up to hit the passage. Fly forward, destroy the fuses and get inside. 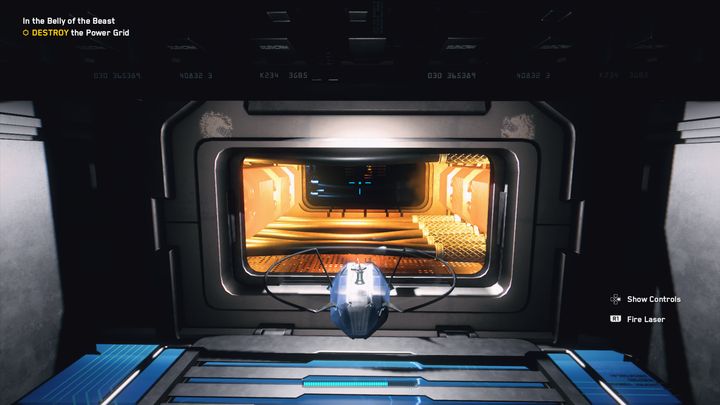 Then there will be an obstacle with two rooms in which generators work. Again, fly between them, when the light goes out, destroy the fuses and move on. There will be more generators again. 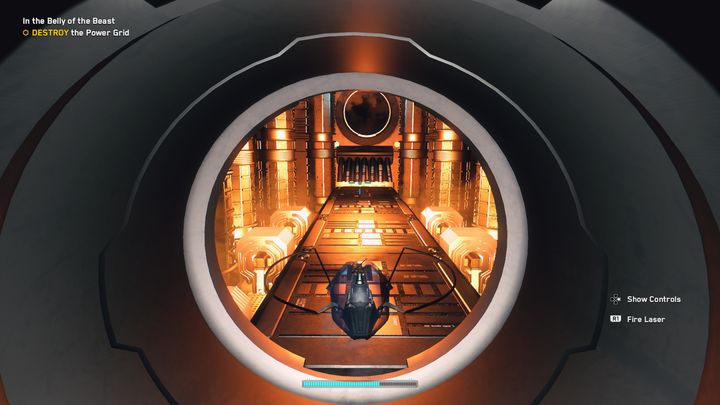 This time the rooms are very close to each other, when one cools down, the other heats up. Between these rooms, there is a small area where you will be safe. Wait for the other room to cool down and move on. 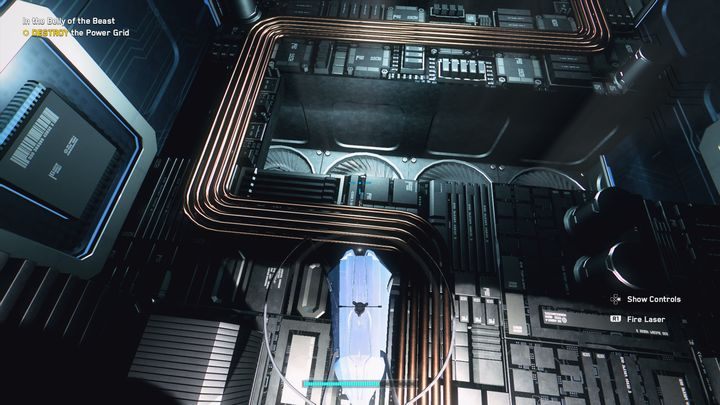 The next stage is characterized by electrical panels and air. The air will want to throw your micro drone into the panels again. To avoid this, follow the drone behind the copper pipes. To move better, lower yourself to a safe level. Be very close to them, so as not to accidentally deviate from the path. Then destroy the fuses and move on. 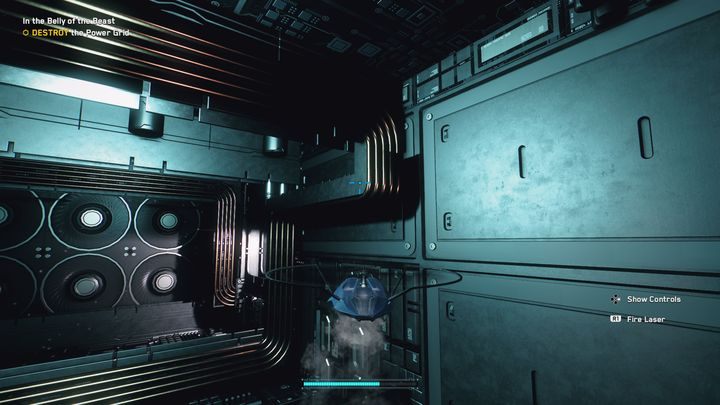 The next room will create a large gust of wind that will pull your drone back. Again, use the copper pipes to block this gust, go to the next room. 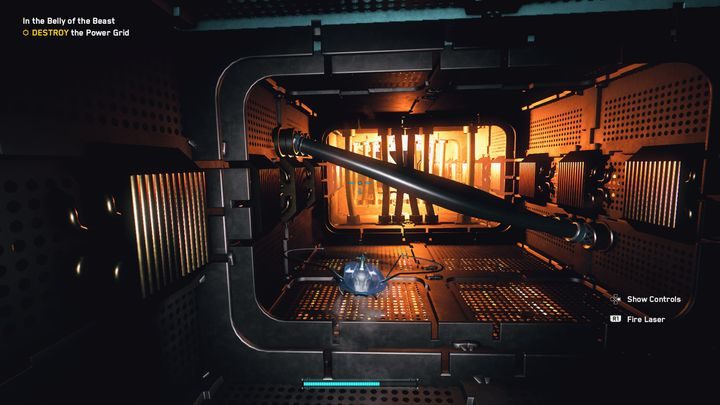 The penultimate room is a large area where the generators are again located. When the first room starts to dim, fly to the next and do not stop, until you find yourself further, the next room will have time to go out. 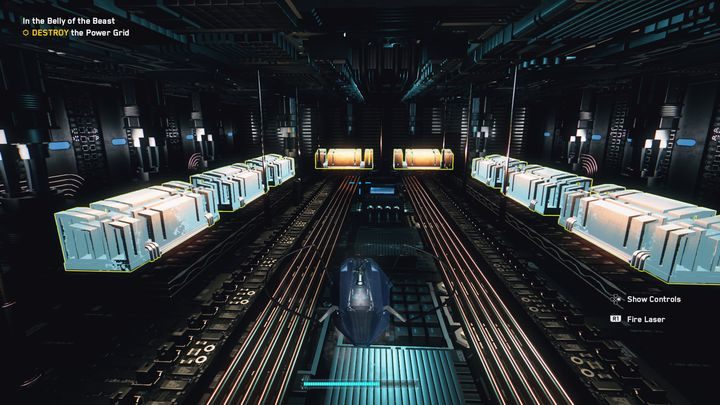 The last, final room is a collection of many generators, which you must destroy with a laser to complete the drone mission. 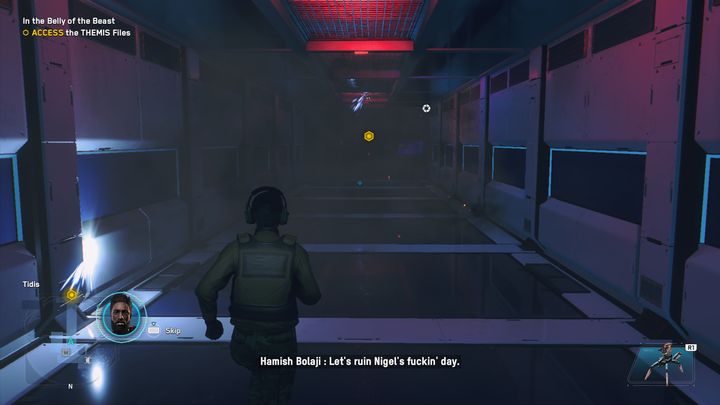 Then head to the next room, listen to what Albion has to say about the THEMIS project, then release the data about it and escape from the site. This will complete all of the missions from the first part of the Albion Missions.