In Watch Dogs Legion it was decided to distinguish three character classes: Enforcer, Infiltrator and Hacker. In a sense, this divides the abilities of the protagonists of the previous installments of the series into three independent categories. This section describes each of them. 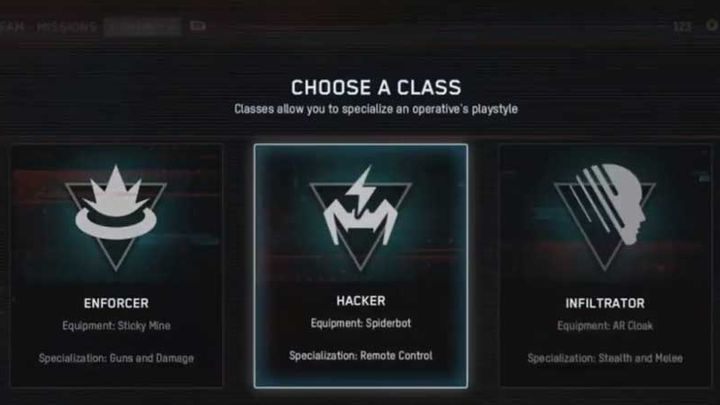 Each character class specializes in other elements of the game. You choose it once, right after you have recruited the person. All abilities are tied to a specific specialization, thanks to this, a strong specialization of selected character is possible.

Enforcer is a class focused on direct combat and battles with opponents. This class is perfect when you go on a mission that you won't even try to pass quietly. Enforcer is a great firearms operative and has special equipment - Sticky Mine. This is an explosive device that you can glue to any surface in the game.

Enforcer is a character class that has a number of abilities. Below you will find a description of these skills.

Infiltrator is a character class which specialty is mainly focused on silent actions and is designed for stealth lovers. It can effectively avoid or stun opponents.

At the moment of the confrontation, the representatives of this class are better suited for close combat. Special equipment for Infiltrators is the AR Cloak. This coat enables a temporary "invisibility" mode. Thanks to this it is possible to sneak past the guards without being noticed. In addition, you can "hide" defeated opponents.

Infiltrator has a number of abilities that only this particular class can unlock. Below you will find a list of abilities along with their applications.

Hacker is a character class who specializes in the use of a variety of equipment. Like the Infiltrator, it works well in quiet operations. Instead of camouflage, they use technology.

A hacker can take control of objects that cannot be controlled by other classes. Their special equipment is Spiderbot. It's a small, versatile robot. You can use it to retrieve access codes, for silent elimination and attacking enemies. In addition, SpiderBot can be upgraded with the abilities of the character, which allows you to increase its control over it.

Hacker has a number of abilities that you can unlock in the course of the game. Below you will find a list of abilities along with their applications.