Right after you will enter the town you may meet the mayor von Graas who is locked in a hanging cage. You can speak with him while standing in front of the fence and ask him about the town's situation. He paid the Leather Jerks to protect the town however they imprisoned him and took over this area and now oppress inhabitants. He will ask your team to save his son named Chris who was locked by Jerks in the distillery in the east part of the town. If you want to help the mayor you have to defeat Dengler and his three men named Pat The Axe, Peter Tzanos and O'Biggun. All three of them you can first weaken however only Pat has a side quest which is described in your diary so it is easy to miss other opportunities. Go to the local bar and speak with the bartender named Ulric Kell.

Kell will suggest you to poison Pat who lies drunk on the floor. You will need a chloral hydrate which you can find in the close clinic. Deliver it to the bartender and he will prepare a proper drink. Wake up Pat by clicking on him multiple times and offer him your beverage. 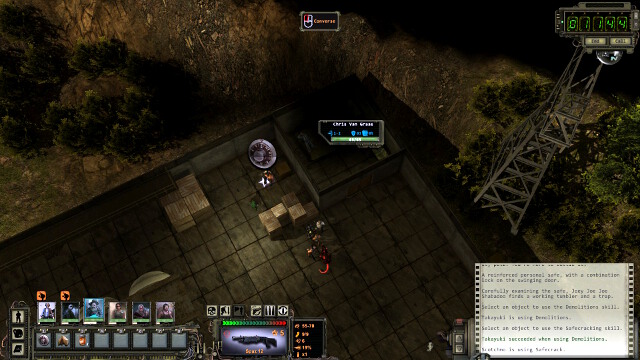 Go to the distillery and tell the guard that you work for Dengler so he will not make any problem about letting your team inside. Peter Tzanos will speak to you. Use your skill Kiss Ass on level 6 and tell him that you are merchants. He will allow you to look over the distillery. Under the east wall you will find a table with empty bottles. Take one of them. Go to the north part of this building where you will find a separate room where is a mayor's son Chris. Chris does really not care about being saved. He offers you to kill his father and Dengler what will help him take over the town. Before you will leave the town you should take care of a safe which is close to the Chris' room (beware of the trap!). Inside you will find a key to the sewers and Chris' diary which will allow you to figure out a key to his hiding place - 2369. 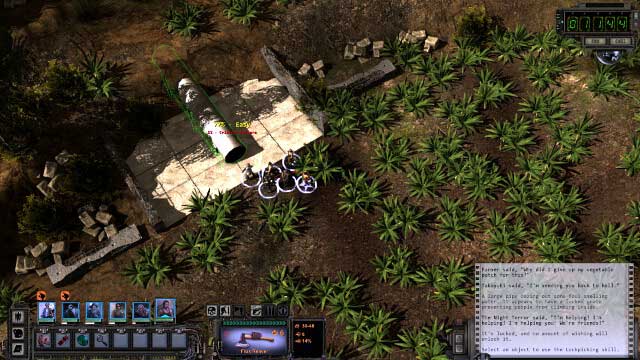 The entrance to sewers

Go to the farm in the north part of the town and use an empty bottle from the distillery on the local well. Don't drink this water or you will catch an illness. It is important to do that before you will help doctor Horchat to cure this town since after that the water will be cleaned. A little further toward north you will also find a pipe to the sewers. Use a key which you have found in the Chris' safe or open it through your Lockpicking skill. In the sewer you will find a cat litter and an alligator which you have to kill. You will run into an explosive on the wall, with laser aiming system which is difficult to disarm. Once you will get on the other side you will be able to enter the bank. 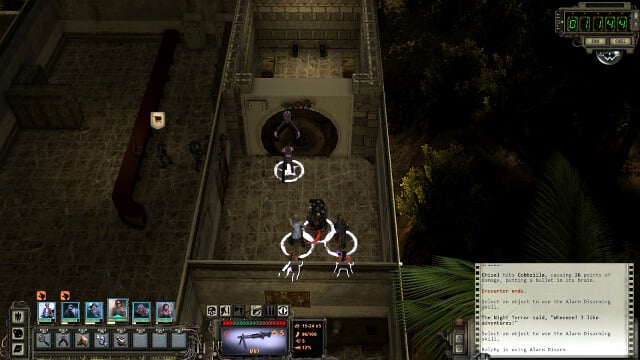 Break into the treasury

Break into the treasury (remember about shutting down the alarm!). In storages you will find ammo and a book which will improve your Safecracking. In Chris's locker (the middle one at the right wall, the combination is 2369), you find a tequila recipe. After you click the right mouse button on any of the lockers, you only get the option to use Brute force. This is a glitch, because you can open the lockers with Safecracking, just as well. This is much easier. As soon as you empty the bank, return to the farm through the sewers.

Go to the east part of the farm where you will find Willa and her sick possum Pogo. You can buy from her a steak from Pogo for 5 bullets. Go towards south to the Dengler's office visiting also a distillery and giving a poisonous water to Peter. 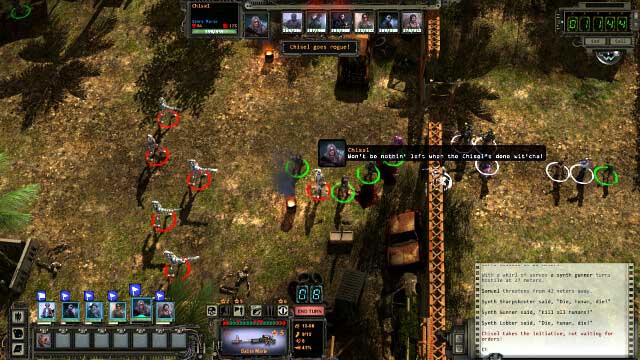 A battle with Dugan's robots

You should speak with Dengler about the side quest which requires you to persuade Jess to plant an agave. Even if you don't want to help him it will allow you to enter the Jerk's area where also is captured the mayor without any problems. Speak with O'Biggun and give him a poisoned steak which you have bought form Willa what will make him sick. After your visit at Dengler's the Rodia's gate will be attacked by robots. Go there and help Jerks defend the city. There only are few robots, but their firepower is overwhelmed and they also use powerful grenades. In spite of that, with help from Jerks, you should be able to manage here. Use them as cannon fodder and, if necessary, retreat deeper into the city, to drag more gang members into the fights. After the fight, remember to loot the bodies. The rest of the Jerks will not have anything against it. 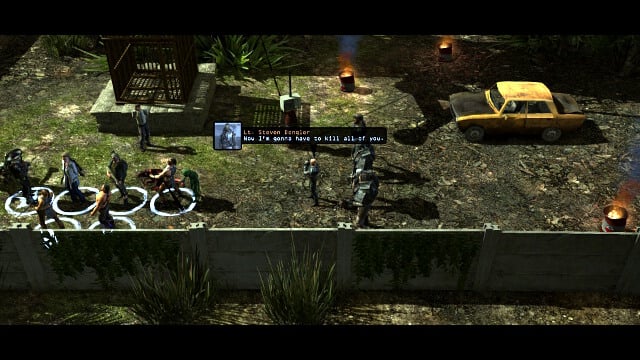 Dengler and his followers will attack your team

Go to the mayor (if you've got a side quest from Dengler you may go there without any problem) and open his cage. Dengler, Pat, Peter and O'Biggun will attack you. Dengler is not a much of a challenge since he has only 3 points of armor and 100 hit points. The other three are the real problem. They have armor 6 and 300 hit points (Tzanatos has 275 hit points). If you have poisoned all of them, they will have only around 100 hit points so the fight will be much easier. Focus O'Biggun first since he has a shotgun which may hurt even a few people at the same time (including the mayor!). You should ignore any other Jerks that will attack you. Once you will defeat Dengler and his three followers the rest of Jerks will run away.

After the fight mayor von Graas will return to his office. You can give him a tequila recipe and you will receive 100$. You will also unlock the quest which requires you to visit Angel Oracle and sign a deal between Rodia and Angel Oracle with the current leader of the stadium (Mr. Manners or Tori Robbinson).