You will unlock this quest thanks to Woodson. If you want to safely travel through the highly irradiated lands of California you have to use upgraded anti-radiation suits. To upgrade them you need 56 pounds of cat litter. In few places you will find bags containing eight pounds of cat litter each. Simple math will tell you that you need to collect 7 bags, although you can find more of them during your missions. You may find 3 of them in Angel Oracle, 4 in Rodia and one in Salt Lake Park, Los Alamitos and Long Beach.

After you will deliver a cat litter to Woodson he will contact with your team once your suits will be finished. It will happen after you will install at least one repeater unit (in Angel Oracle or in Rodia). Woodson will order you to go to the new minor area called Whittier where you have to fight with one Synth. After you will get there it will be clear that indeed there is one Synth here although it is supported by ten others which will attack you from every side. This fight is a very difficult challenge and a huge test for the entire team, especially if you play on the high difficulty level. If you can't defeat these enemies you should give up and focus on other quests to receive as many experience points and items as you can. It's also beneficial to make a visit to a merchant in Salt Lake Park since he sells heavy weapons including RPGs. Also it is a good idea to use every food from your inventory that can increase your stats just before you will visit Whittier (once you will get there you will have no time). 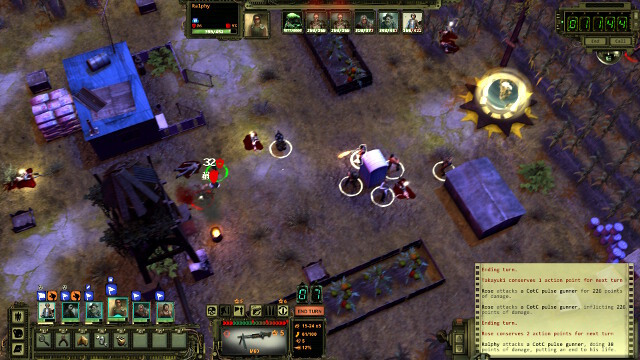 A fight in Whittier

You will fight in a quite an open area. There is not many places to hide and what is even more important you will be attacked from four sides. The enemy leader is in the middle and you should take him down as fast as possible, preferably during the second or third turn of your characters. The rest of Synths will be far away until now and they need some time to get closer. Two of them will be attacking from north and two from west, three of them will be on east and three on the south.

After you will kill the main Synth (which will explode in a moment of his death!) you should move your entire team in one direction which will force cyborgs from other sides to go through a longer distance. Use your strongest weapons to deal with Synths which you are getting closer to and exterminate them as fast as you can. After that you may take their position and deal with attacks from other three sides. You should also regard snipers since they have a huge range advantage. If you need you can hide to force them coming out to an open field. 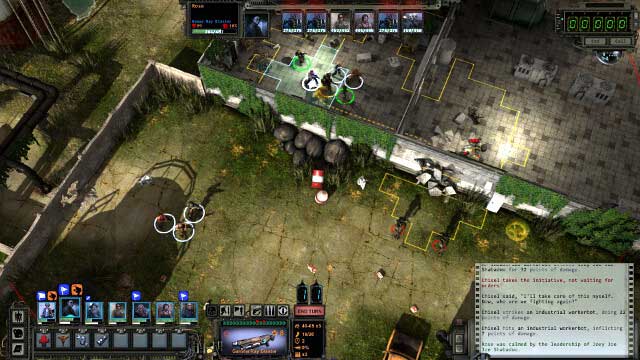 Soon after your visit in Whittier Woodson will contact you and tell you that you can receive suits from him. After you will get to Santa Fe you will also be able to join to your team new character named Brother Thomas who is an ex-member of God's Militia. Before you will speak to Woodson you should leave a part of your team outside of the building, just like on the screenshot above. Once again you will be attacked by surprise. People you left outside can take care of local cans. Right now try to avoid entering the great room. Close to the main doors you will find another three robots however they will not attack you if you will stay out of their sight, so you can focus now on these robots that are close to the hole in the wall.

After this encounter you will receive from Woodson new anti-radiation suits. They ensure protection 5 which is too low to allow you to get to the Seal Beach (although in theory you can try to get there), however you can now travel toward north to Hollywood and Griffith Park where you need to install a repeater unit.