The radio tower is in the central part of the town. Right after you enter, you can head left and explore the wrecked plane, where there is Red inside (you will have to defeat a Dicer and several smaller robots) or go right and use Brute Force to smash the wall with a turret behind it. Then, you will have to fight several more robots. 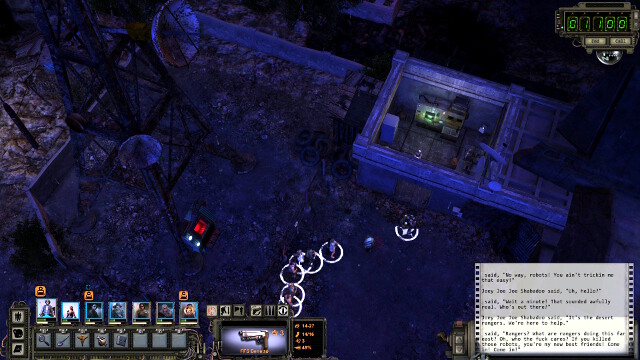 Next to the tower itself, you will find two more robots, including a Thresher that is trying to smash the door to the nearby radio broadcasting station. The gate to the tower is locked and you cannot open it in any conventional way so, you are going to need the key. Talk to Wally from the broadcasting station, over the intercom and he will open the door. In return for the key, Wally wants you to fight robots off, but you can also obtain the key with Kiss Ass 5 or Hard Ass 5. After you obtain the key, imply open the gate and mount the Repeater Unit. from Vargas, you will receive orders to return to the Citadel, but you can tell him that you want to deal with the robots here, first.

The Tinker in the room to the North-East is the problem. You need to cut towards her across the left side of the map and walk around the huge plane to the North. It is a tough endeavor - apart from the standard robots, you will also find here a turret and two slicers. If possible, try to deal with the turret at a distance, with the sniper (have the rest remain behind, out of reach), without attracting the Slicers. The Slicers themselves are best if eliminated with missiles. 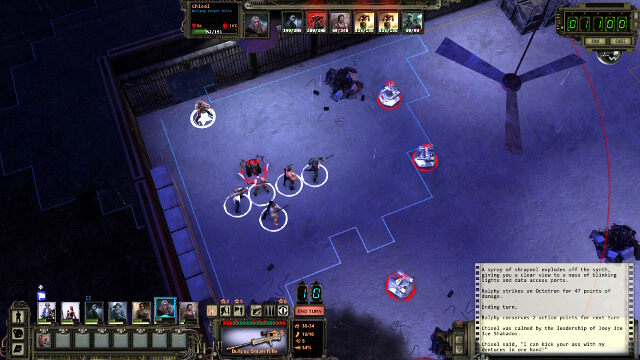 Leave the party at the entrance

After you enter the building, leave the party at the entrance. Send a long-range character ahead, who will take the first shot at Tinker. The beginning of the fight wakes up the robots all around the room. If you were to stand in the middle, you would be surrounded. However, with your men at the door, you can easily deal with the threesome and fire at various robots that approach. As for Tinker, ignore her now - she is sluggish; deal only with the robots that are the closest. This way, not only you make the fight easier for you, but also you will lure Tinker away from Binh so, you will not risk wounding the girl later on, with a poorly-aimed shot. Once you eliminate all the robots, deal one powerful shot at Tinker (LAW) - she stops fighting; you will be free to explore the room (in Tinker's locker, there are, among others, a console that you can give to Mercaptain and parts to repair the robot, in front of the Prison with) and heal the party. If you have not destroyed all of the robots, before Tinker was severely damaged, the remaining machines leave you alone and they return to patrolling the area. 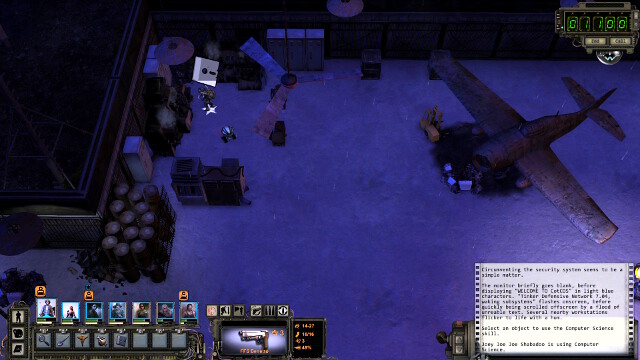 Binh is in the armchair in the middle and she is the Tinker's main argument. She threatens that she blows up the girl's heart, if you do not get out. If you touch the girl, she will die. The way to rescue the girl is to hack into the nearby computers. The big compute is the mainframe, where the remaining two control the robots and communications. You can only hack into two computers Regardless of the order, in which you do that, Tinker attacks after the second one is hacked. To free the girl, hack into the mainframe computer and the one at the wall (the screenshot). This way, Tinker will be unable to blow up the girl's heart. Another fight will ensue, but it should be easier this time, as long as you have destroyed all of the robots earlier. If not, you will also have to face all of the remnants also. Strike with everything that you pack (make sure that you do not hit Binh!). Once you drain Tinker's Constitution to 1, she gives up and blows herself up, after you start a conversation. Do not approach her, just kill her. This is a trap and she explodes as soon as you start the conversation. If, however, you want to see the dialogue, send out one character only. If there still are any robots in the building, you will have to fight them. This time around, the fight will not be interrupted by anything, so you simply need to eliminate them all.

Afterwards, rescue Binh and remember to take Tinker's finger with you. Then, you can visit Wallie at the radio station to tell him the good news. Then, return to the Citadel.

Along your path to the Citadel, you will finally be able to deal with one unresolved matter. You will receive an order from Vargas to get to the Prison. To learn the details, see the chapter entitled " Kill Commandant Danforth and liberate the Happy Valley from the Red Skorpions" in the Prison quests section. 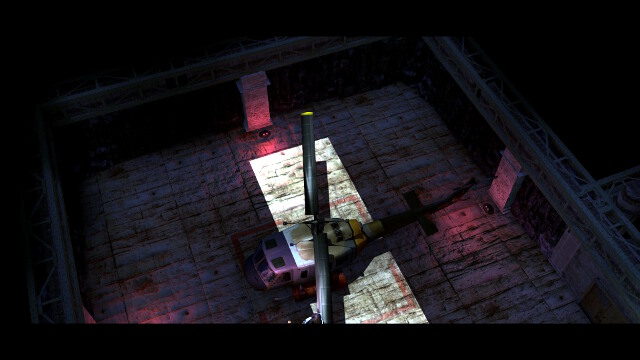 Once you return to the Citadel, reach its end and talk to General Vargas. After the cutscene, a door opens and you will find a helicopter in the room. Thanks to it, you will reach California. Remember that you will not be able to return here so, complete all of the quests that are still incomplete and replenish your supplies! Once you are ready, get going to meet the hot beaches of Los Angeles and remember to take sunglasses along.

1. You can completely ignore Tinker. Obtain the tower key from Wally, using dialogue skills, mount the Repeater Unit and be on your way to California - Damonta falls and everyone dies;

2. As one of the characters, sneak past Tinker to reach the computers, before you start the fight. You need to make sure that you are not spotted by the Thrasher patrolling here. Hack into the mainframe and to the computer next to the plane (not the one at the wall), and you will immediately damage all of the robots and you will be fighting Tinker only- Binh dies, but the fight is going to be very easy. Alternatively, after the fight starts, send something strong towards Tinker, so she stops fighting, after which you can hack into these computers - the effect is the same and all the robots explode.