Radio tower  Here you'll find Wally, who is attacked by robots. When you destroy them go talk to Wally through intercom and he let you in. Before he gives you a key, he wants you to take care of robots problem. You can get the key immediately using Hard Ass (lvl 5) or Kiss Ass (lvl 5). Open the gate and mount the second Repeater Unit, to end main quest in Arizona. Then you can go straight to Citadel.

Tinker  In this place you'll find Tinker. She will attack you, but when her health goes to half, she stops the battle. Girl on chair, Bihn now can be rescued by hacking computers: big one and any smaller. You can find more information about Tinker in later part of this chapter.

Lexcanium (NPC)  Walking dctionary. After you freeing him from cage, you'll be able to join him into your team.

#TRL-01553  In Tinker's stash you can find missing parts to repair robot before turrets in Danforth's Prison. With it you'll be able to get inside using force. In the same containter you'll find a Bushell Ocelot console, which you can later give to Mercaptain in Citadel.

Clyde  If you rescued Clyde in Canyon, now you'll met him here. Water Company was attacked by robots. He wants you to get inside and try to rescue anyone you can. Entrace next to Clyde is blocked from inside, you have to use side entrace, you can go under the truck instead of going around building. For finishing Clyde's quest he'll give you a book +1 to Dissarming.

Red  Red from Prison. He'll be entreating you to set him free from attackig 4 robots in plane. When you free him he'll ask you to help him find Sierra Madre plane - you'll find it in Silos 7 location behind hidden passage.

Jill Yates  Here you'll find a Jull Yates, Doc and Bart, if you rescued then in Canyon. With Doc you can trade - he sells medicaments (but in not low price). Jill will give you a quest to find her cows. Also you can ask her for help and she'll give you Bart, who will be following your team.

Jill's cows  Cows, which Jill is looking for. If you've Bart in team, he'll take the cows to Jill. If not, use Animal Whisperer and cows will go to herby themselves. After that go back to get reward - 50$.

Binh's parents  Parents of Binh, they want you to find her daughter, who was kidnapped by Tinker.

Hopi and Magee  They'll be attacked by four robots when you meet them. After destroying those you'll be able to buy ammunation from Hopi. There's a special discobot Jaime and unique heavy gun - Big Betty, which are in Magee custody. Robot can be repaired using Computers skill, and he'll be going after team. What's about gun - give Magee some good weapon, and she use it to repair Betty and she'll give it to you.

Office  In water company, apart of robots, which you've to destroy for Clyde, you'll find a painting, which you can bring to Flintlock in Citadel's museum. Also there's a dead body of David Barnes - you can put on his neck Sara's Medalion from Canyon of Titan. Nearby there's a safe - password: 152260.

Toaster  Inside you'll find bones for dog, which you can give to Hyaon Drhku watching Danforth's dogs in Prison (you've to enter Prison without fighting). In return you'll get book learning +1 to Animal Whisperer.

Bar  Inside you'll find inter alia a robot using foretelling machine (it destroys machine, so if you don't want to let it happen attack this robot) and very good blunt weapon. 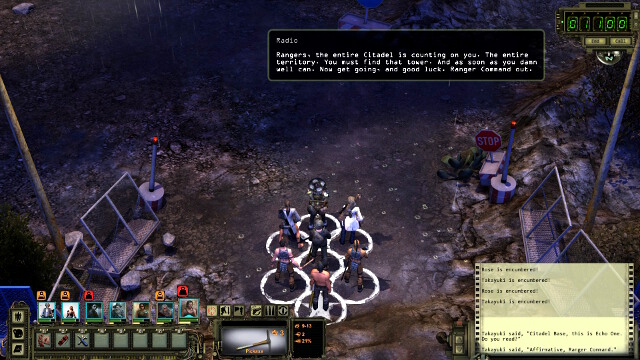 The final destination to your travels all around Arizona. It is time to mount the Repeater Unit that has been taking up space in your inventory, since the beginning of the game. It is not going to be too easy, though - Damonta has been attacked by robots that killed out, nearly, the entire population of the city.

In Damonta, you meet several old friends (assuming that they have survived the previous encounters), for whom you will be able to complete several side quests. Apart from that, though, this location is mainly combat-oriented, where you fight all possible metal junk. Be well-prepared while visiting Damonta. Energy weapons and heavy machine guns should do the job. It is nearly imperative (especially at the highest difficulty level) that you also have several missiles with you (in necessary, return as far back as the Citadel and buy several of them from Tan - without heavy artillery, you may be stepping into a wasps' nest). At the same time, remember that, in spite of high armor, also maces are great here so, not always do you have to blaze your guns.

As for the robots that you are going to fight, two types are especially noteworthy. The first one is the Thresher. His head-butt pushes the nearby Rangers away. The damage of this attack is not too high. What is much more important is that each of his attacks stuns the repelled and decreases their speed, and vigilance, by 3. This may serve as a handicap in combat, if it turns out that you are incapable of performing the standard number of attacks in a turn. Fortunately, he is slow and a good sniper - supported with a machine gun burst - should be able to eliminate the threat before a Thresher approaches . 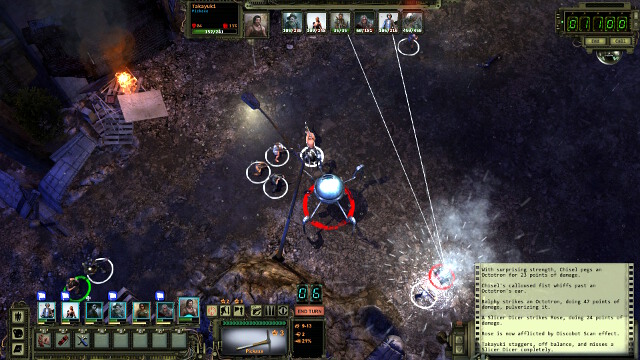 A much serious problem is the Slicer Dicer. Arguably, the strongest of the robots. Thick armor and more than 400 CON suggest a tough nut to crack straight away. Apart from that, he can launch AoE attacks and may easily move around over long distances. Also, It forms a field that decreases coordination in all the characters around it. While fighting, try to scatter the party as much as possible. The longer the fight, the worse for you, because everyone is exposed to attacks, which is why it is the best to attack them with LAWs, or even with AA missiles. Also remember that the Slicer explodes at the moment of death and wounds everyone around it.

Finally, it is worth mentioning that Damonta, from a technical point of view, lies outside of the Ranger jurisdiction so, the best you can do is mount the Repeater Unit and leave the city to its own fate.

The synthetic that is responsible for the attack on Damonta. She has large number of health points and she attacks with a rather strong energy shot. On the other hand, she has almost no armor and is very slow, so it is easy to keep her at distance. She is surrounded by a small robot army whom you should take care of as well.

The battle with Tinker will start when you will shoot her or you will be noticed by any of the robots. At this point it is best to focus on getting rid of the robots and ignore Tinker or keep her at distance. When all the robots are down, attack the boss. Few series or one LAW should be enough to make her stop fighting. She will order you to leave or she will kill Binh. If you haven't destroyed all the robots before hurting Tinker, the surviving machines will become neutral and will return to patrolling the building.

Binh will explode if you touch her now or ask Tinker about something three times! In order to save Binh, you must take care of the nearby computers. Hack the big one and the one under the wall. Tinker will attack again with the help of robots that survived the first battle, but she will give up just before the fatal blow. However, when you will talk with her, you will learn that it was just a trick and she will blow herself up.

Don't forget about freeing Binh once everything is done and then about visiting her parents. You will be able to search their first aid kit to which you didn't have access previously.

If you don't care about Binh's life, you can sneak up as one person to the computers before the battle and hack the large computer and the one near the plane. It will blow up all robots (and Binh), making the battle extremely easy. You will simply have to hit Tinker with one or two rockets.