Toaster – Drug Preparation G, which you can give to Sandler from Rattlesnake Militia.

Scorpions – About 10 Scorpions, with two heavy armed with Bren's. On this map Scorpions will atack, even if you paid a weapon tax before in Happy Valley, so get ready for heavy battles. If you don't want to fight, you cant try go through mine field.

Scorpion's barricade – One and only passage into area to farm and further to Prison. Havily guarded, and what's more, road's going up, so it'll be hard time. In order you firstly soldiers with granades, after them heavy armed and remember - for heavy armour energetic weapons is doing it's job. Very good strategy is using Sniper rifle, when rest of a team are waiting at the back - this way you'll force Scorpions to abandon their positions into free space.
Try to not keep team in small group, to minimalize risk high damage from granades.

Prison – Entrace into Prison is guarded, by heavy towers, which you won't be able to pass. Let the history go it's own way - to get inside you have to finish main quest in Damontta. Then Jobe will give you antidote for Danforth dogs, which in meantime he managed to poison. With serum go to intercom before entrace into Prison and say Danforth, that you've got antidote, and he will let you in.
Alternative way is to get part need to repair a robot near entrace into prison, which you can get from Tinker in Damonta.

Danforth – Leader of Scorpions, his death will destroy Red Scorpion Militia. Also you can let him live, and make peace between Rangers and Scorpions.

Jim Auwerter – Owner of the local farm. In comparsion to groups in other locations, those Scorpions won't be attacking, at least until you won't do them any harm.

Jobe – Jobe wants to get back his farm. He'll ask you to kill Danforth what you won't be able to do now.
After you mount a Repeater Unit in Damonta desperated Jobe will poison Danforth's dogs. When you visit him then he'll give you antidote, with witch you'll be able to enter Prison using intercom and informing Danforth that you can heal his dogs.

Brown's pigs – They'll go instinctly to Brawn's farm, when you free then (destroy fence using Brute Force), but this will make local guards atack you. Remember also to clean mine field, before you free those pigs.

Dogs – You can treat them using Jobe's serum.

Cave – In there you'll find some Scorpions. If you unlock passage, by moving a crate using crane in Happy Valley, you can use this cave as shortcut between two areas. 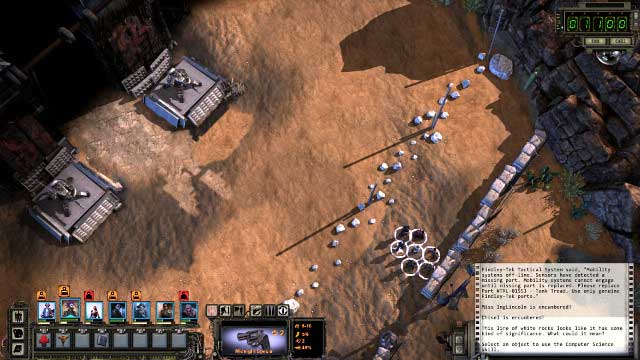 The stones delineate the safe zone

It is a, typically, combat location where you cannot do much, from the position of the story line. You will be fighting the Skorpions over and over again (regardless of whether you paid the tax at the valley or not), which may be tough and, what is even more, you will not benefit from them (apart from experience, gear and satisfaction, that is), because you will not be able to access the Prison itself anyways because of the powerful turrets that guard the entrance. 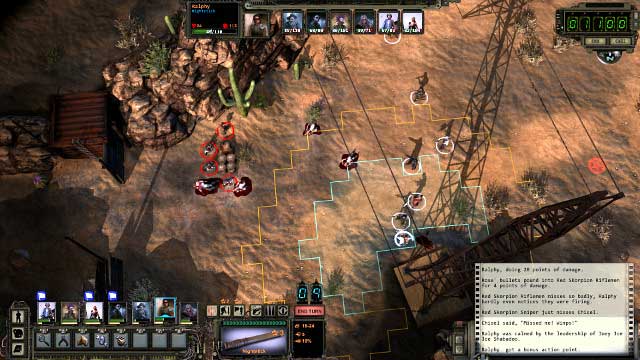 The only safe location (as long as you keep a low profile) is the farm atop the hill, but you need to cut through formidable fortifications of the Skorpions, first, to reach it. First of all, either deal with the enemies in the middle, or go left across the mine field (deactivate the mines, of course) to walk around the guards. Then, you still need to cut through the well-manned outpost, up the slope. First of all, you need to watch out for the grenades and heavy machine guns. The best solution is to use a single sniper that attracts the attention of the opponents and lures them out into the open, as shown in the screenshot. Fighting over a flat area, where the Skorpions have nothing to hide behind, is much easier.

You will be able to enter the Prison and deal with Danforth only after you pay a visit to Damonta.