Toaster  Toaster contains Desiccated Juniper Berries, which you can give to seller in Gornikovich Distillary.

Chis VanOverbake  Here you can meet for the first time tax-collector, Chris VanOberbake with his men. You'l be obligated to pay the tax of having weapons (100$). If you say no to him you'll have to fight him and at once you'll be Red Scorpions' enemy. If you pay - Scorpions will go further and won't be bothering you when you walk around Prison.

Gate to Red's place  This's the gate, which behind is Red's shop, guarded by two turrets. To turn them off use password "ROSEBUD" on computer nearby (this password is unique - it appears in Wasteland 1 and none in game world will know that password - every that you'll hear from people are wrong).
You can also try to break into by force, but turrets can kill even with one hit, so from the beggining use heavy artilery - rockets, granades, or use sniper with will be shooting from higher range than turrets can shoot, and rest of your team keep behind. From destroying turrets you'll gain a lot of experience. Also you can turn them off using password, and then destroy them if you want to get experience without risk lives of your men in fight.

Alternatively way to get to Red is using through caves - then you'll get to the opposite side where a mine field is.

Red  Everyone who you'll ask about Damonta will say - "Red's know the way". He'll say that it is located in high radiated areas and you need better antiradiation suits to get there. He'll also tell you, that those suits can be in possession of a Baychowski, whose is now in prison in Ranger Citadel.

Outpost  Highly guarded outpost of Red Scorpions. If you paid a weapon tax - you can pass them safetly. If not - Scorpions immediately will start shooting you. Two Scorpions on roofs has heavy guns - their should be your high priority target. You have to keep all your characters hidden behind covers, but be careful - heavy guns can destroy them.
A lot easier is to go right, where you'll find a wall which can be destroyed, or even further until crane - then you can attack Scorpions from behind or avoid them completely.

Hidden passage  It leads to caves of Red Scorpions on Prison territory. To unlock it, you've to hack crane nearby. In the cave there's several Scorpions, but entering this side fight will be a lot easier, than using main entrance.

Damaged well  Mr and mrs Caminda will be pleased if you could repair their well. If you do this you will be able to resupply water and you'll get FAMAS from mrs Caminda.

Browns' Farm  William Brown wants you to get back his pigs, confiscated by Red Scorpions. You'll find them in the farm on Prison area.

Pitbull's slaves  Pitbull keep here his slaves. You can free them (every cage has it own alarm system). If you do this he'll find you and will atack you - he's a though oponent and he uses granades.
Alternatively if you killed Pitbull before in Rail Nomads Camp, you can now safetly free prisoners and you even don't have to look for alarm.

Frank Darvis  Frank'll tell you about neighbourhood. He'll tell you inter alia about Red, who has antiradiation suits you are looking for.
You can use Animal Whisperer skill on his goat, to calm it and use Brute force on his cart, to help him. For helping him he'll let you trade with him. He also shows you location of Shrine on a map. He's going further, so you won't meet him in here.

Cyril Verba  Represent of Scorpions, he sells food for locals. He'll be your enemy, when you'll be fighting with Scorpions.

Damaged forklift  Using Repair skill you can use second passage around area to avoid meeting with Chris Van Overbak.

Statue  It gives to all your team members +1 point to skill. It's guarded by to Honey Badgers.

Anna Hegedus  She wants to kill her. She looks ill, and without possibility to rescue her. If you kill her one of the Brown's kids shows, and he wants to tell about what you've done. You can convince him, that you did the right thing (Smart Ass lvl 1), kill him, or let him go. If he'll tell his father abut that situation, you won't be able to finish the mission for hims (rescuing pigs).

Cave  To enter here you must brake open doots. Inside there are three types of creatures - Honey Badgers, Toads and Wolves. Especially those first can be a problem, because of strong armour, so it's wise to use weapons with good penetration.
Through cave you can get to Red.

Mine field  Here is one of entraces into cave. It's alternate path to Red, if you don't know password to gate. There's a lot of mines, it can be hard without Perception and Dissarming skill.
Also there's a lot of goats.

Wall  You can break it, to attack Scorpions from behind. It requires high Brute Force level (about 5, 6).

Crane  Using on it Computer skill, you can open a passage to Prison and unlock entrace into caves under the Prison.

Fence  You can break it with Brute Force, to unlock passage.

You will be sent to the Prison after the failed attempt to mount the second Repeater Unit. The main task here is to find information on the way to Damonta. Prison used to be a Ranger HQ fifteen years ago, but it is now occupied by a former gang - Red Skorpions, with their jurisdiction over all the locals and visitors so, technically, also your team. 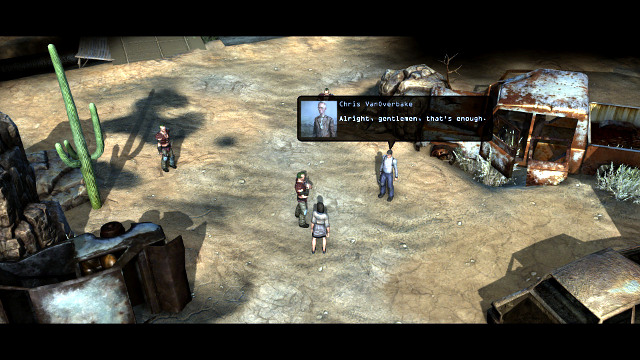 In fact, this is a quasi-optional location. You do not need to worry about the Skorpion business and, what is even more, during your first visit to the region, you will not be able to defeat them. You will learn about Damonta after you talk to Red and this conversation is, actually, everything that you need to do here. However, you can help the locals, a bit and, optionally, decimate the ranks of the Red Skorpions. In the central part of the map, you will be accosted by a tax collector Chris VanOverbake, who demands a payment for the weapons that you have. If you do not pay, he will turn hostile. If you do, you can move around the valley freely.